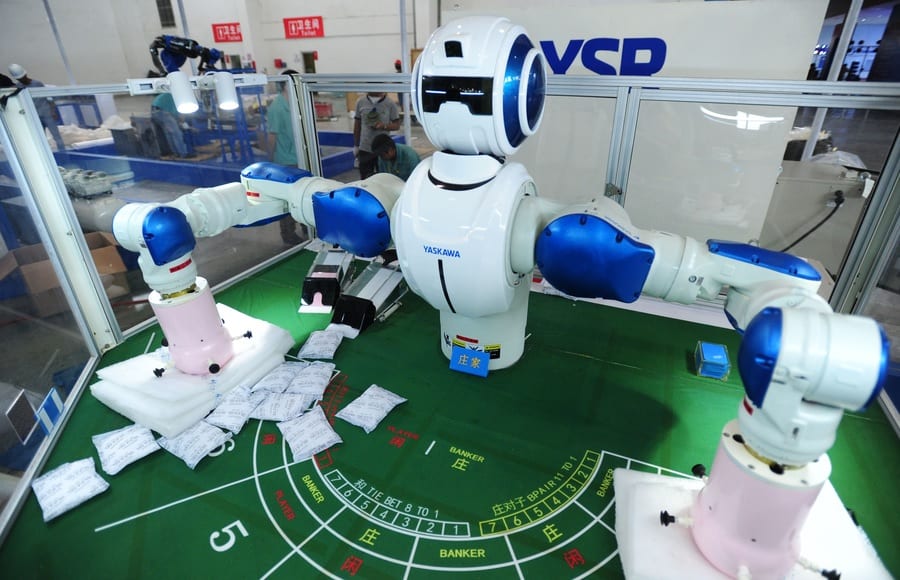 We are all used to the croupier that carries out the tasks to set the pace of the game on a casino table right? Well, casino robot croupiers are becoming a large topic of interest within the casino gaming world. The concept that has come to our attention is that pretty much, players will need to expect that gaming will take a turn with the introduction of a robot.

This option has become increasingly popular across the world-some places already have begun to incorporate a robotic style within their gaming, but by no means a robot croupier-as of yet.

The industry has been brewing robotic manufacturers for a while. It is not something completely out of the blue, right? Many of us watch in awe at the revolution of robotics in the reading industry of technology in China for example. Slowly the transportation industry and other sectors have become very obvious choices to introduce this level of automatic capabilities and it has demonstrated the endless success and capabilities of such methods.

For that reason, gambler commentators have come to the conclusion that we are surely going to be the next generation of automation via robotics.

The Virtual World is Already Here

Many would also comment that perhaps the virtual world has already been introduced and it is pretty much a matter of time before it progresses further. Currently, there are live casinos and mobile casinos that are being worked above the traditional desktop or real life options of playing casino games. This virtual reality has become very popular to play with as it increased player independence and if you think about it, the casinos can make much more money as there is not really a limit as to how many players can play at once, which is expected for more traditional on site casino options.

Gambler operators can cut their costs dramatically through the live and mobile options, due to the larger customer access all at once in the gaming communities. Yes, the live options do use real time croupiers, but the robot options introduce more freedom for constant operation by the casino operators.

Having said previously of the constant operation provided by the virtual platforms of casinos, if casinos do introduce further robotic gaming options, this should increase their profit capacity, due to the lack of costing needed to operate live dealer robot croupiers instead of real time human croupiers-for a casino this is a no brainer as profits and cash flow margins are priority for such casino establishments.

Introducing robot croupiers would of course attract much attention and be an incentive for more players to come to the casinos, that is for sure. This would definitely generate more traffic and interest in the casinos, which of course will benefit establishments in the long run. The operation procedure of robot croupiers could in the long terms could reduce the casinos operation hassle, in terms of croupiers never trying to take money from the casino, or grow tired of providing custom to players-and of course reduce costs in terms of wage payments-the list goes on in favour of this movement that is for sure.

Paradise Entertainment Has An Ace Up Their Sleeve

This technology as it happens actually already exists elsewhere-in Hong Kong to be precise. You will find that the tech firm in Paradise Entertainment features this technology within their gaming machines that they have within their establishment. The robot croupier is a prototype called Min and was actually introduced briefly within casinos of Macua. The robot was placed at the card table games within 2016 and after a successful run, it inspired further movements along the lines of this gaming field.

Min was a step below the kind of robotic croupier that Paradise Entertainment was ultimately after. They are in the works currently for producing a robotic croupier that can actually read and function human emotion for its management of the table games within a casino. Of course this robot would only apply to the real-time casino land based situations, but it is definitely a start of a revolution within the time of casino gaming, that's for sure.

The developments of Min for the future will be the automation of emotion recognition, in addition to scanners that can translate all languages of playing customers, so that the robot can communicate with everyone effectively and immediately. The scanner within the machine would also be able to sensor and pick up any cheating in the works, meaning this would also be an added security measure that a casino could engage with alongside other casino software technology.

Since Min was introduced in the summer of 2016, the hype over robotic croupiers has died down just a little. A casino would need to build the excitement around the whole idea again, using clever advertisements and possible promotional options alongside to entice players. There always come a topic and mind that perhaps people may not like the robotic option over real life human interaction-of course robots will never compare to that, but we suppose each player for themselves and not it cannot be all entirely applied to each and every player.

The technology behind Min in large retrospect is not actually widely available and therefore can be tricky in terms of being affordable to all casino establishments. Of course the operation of such technology will not be as large as paying wages for a human croupier in the long run, yet casinos will need to immediately purchase more than one to cater to their casino dimensions and that definitely will not come cheap… So the decision of course will need to be driven and decided by each casino when the time comes and the technology of robotic croupiers becomes widely available.

Robotic gaming introductions are all driven by one thing-the saving of money. The gambling market is driven by cash flow and therefore these two work very well together overall. The introduction of robotic croupiers can really be cost effective to the way casinos run themselves. The fact that robots can be programmed to do multiple things beyond human capabilities, really brings the idea that casino systems can be entirely effective and efficient in the ways they operate themselves-with multiple languages, added security systems to monitor gaming and operate continuously without the need of breaks and staff change for example.

Human croupiers will remain for quite some time, while technology gets to a standard that can be operated on a large scale basis. Of course this is not just taking the costs into account, but the methods needed to fabricate a connection between all the casino games, their experience and the robot operation. There needs to be a systematic continuation that needs to be developed in the works too, beyond the technological aspect of things.

We do expect that robotic croupiers will be put in slowly, meaning there will be a mix of human and robotic croupiers running our most loved games, until the technology becomes cheaper that casinos can operate fully dependent on robots. There are technical issues that do arise in the process of introducing the new operation-how will security and safety be incorporated into the new robot systems.

Will there be a way that casinos can integrate a safe function of the robot croupiers that cannot be hacked for example? We know that anything that links to the internet rises to that risk. So casinos will of course need to evaluate that, should they wish to bring this forward permanently and on a larger scale for players to use.