We all have to suspend our disbelief from time to time - whether it’s for work or leisure-related reasons. It can often be done as a way to hide away from the chaos that day to day life brings us, but more often than not, it’s simply being done in order for us all to picture what it would’ve been like to live and thrive in a completely different time period. Fiction is great for subjects like that, and as you can probably imagine, slot providers have been taking advantage of these genres and ideologies for years. They do so to make money, of course, but they also do it so that players can be given an experience unlike anything they’ve ever seen before. 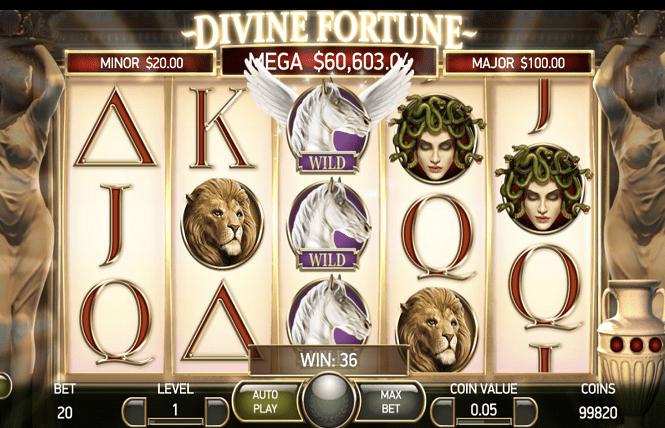 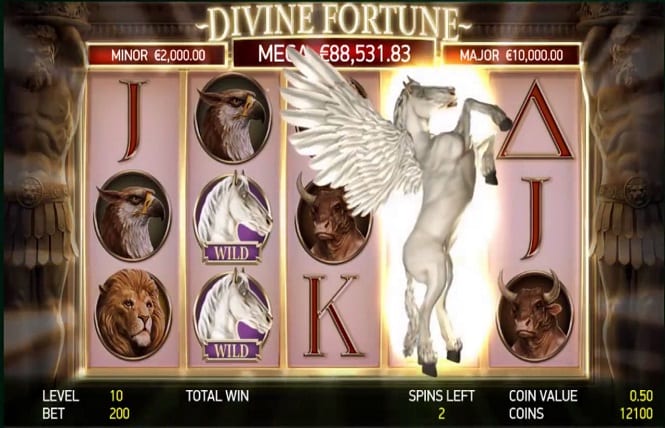 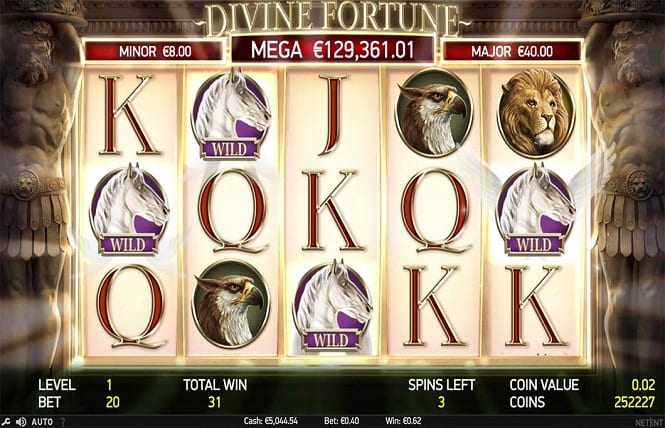 Today, we’re going to be taking a look at one of NetEnt’s most intriguing slots – Divine Fortune.

Get ready to go on a trip you’ll never forget as NetEnt transports us over to Ancient Greece to conquer and explore. Mythical creatures are there for all to see from the marketing to the symbols themselves, and from the moment you start playing, it’s clear to see that there’s nothing comical about DF.

The dark and eerie theming helps us to feel as if we’re heading on the journey of a lifetime, as this epic quest begins.

The layout is simple and straight to the point: 5×3 reels and rows. It gives you a great view of the symbols, and it doesn’t take away from the background visual which sticks with the Greek theme nicely.

There are 20 paylines to enjoy in this slot, but as you’ve probably guessed by now, there’s a whole lot more to it than that.

The RTP can often be viewed as one of the most defining features behind any and all slots, if only because it could determine how frequently the standard player will go back to it. NetEnt knows how to draw in the masses in more ways than one, though, and with Divine Fortune, they’ve done so expertly with a strong 96.59% RTP. That’s above the standard industry average, and with medium to high volatility, you could be looking at a slot that brings in relatively frequent big wins. Either way, there’s enough there to make the high rollers take a second look at it.

You can get started on this slot with a 0.20 minimum stake, and if you’re feeling funky, then you could take that all the way up to a tasty maximum of 100.

In regards to how much you could wind up winning, stay tuned for the jackpot talk later on in the review.

The soundtrack for this slot is near enough perfect, to the point where it probably wouldn’t look or sound too out of place on a movie score. Everything about it feels majestic from the colour scheme to the animation, and there has quite clearly been some serious effort that has gone into the smaller details on the symbols – so kudos to NetEnt on that side of things.

The playcards get us started as the lower value symbols with A, K, Q and J all being presented in a way that sticks with the theming – which, of course, is always appreciated.

The stunning symbols on the reels include Medusa, the Nemean lion, a phoenix and the bizarre yet somewhat fascinating Minotaur.

Bonus features function as the heart and soul of most slots these days, and Divine Fortune certainly keeps that trend going – and as such, we’re going to get straight to it by running through its four main bonuses.

The gorgeous Pegasus is the wild symbol and will substitute itself for all other symbols aside from the bonus and free spin symbols, with there being no scatter in sight. The first of the four features is the Falling Wilds Re-Spin which is triggered whenever a wild appears on the reels and then shifts down one position to award a re-spin. This feature can be used in the Free Spins feature and the initial game itself, and the more wilds you get, the more re-spins you will receive.

The Wild of Wild feature is triggered when an overlay wild lands on top of the first initial wild, before then expanding and taking over the whole reel – which makes for quite a visual in itself. The wild symbols will then shift one place on the reel with another free re-spin being given to the player, and if three or more Free Spins symbols appear in the same spin, the Falling Wilds Re-Spins are then played too after the feature has concluded. Make sense?

Then, we come to the main event: the Jackpot Bonus feature, because that’s right folks, the jackpot is progressive.

This is triggered when three or more gold coin symbols aka the bonus are found in the initial game as well as in the Falling Wilds feature. Each bonus symbol could win you upwards of 200 times your stake and at the start of the process, you will have three spins – with the number of spins resetting to three if another bonus symbol appears. The aim of the game is to fill as many rows as you can whilst the gold coin symbols remain sticky – and if you fill one whole row, you’ll get the Minor Jackpot. If you fill two you will get the Major Jackpot, and if you get three, you will win the Mega Jackpot, with reports of some punters winning upwards of £100,000.

Mobile gaming is the direction all slots appear to be going in these days, and it’ll come as no surprise that NetEnt has made this compatible with all iOS and Android devices. You can play this game in mobile format as well as some of the top online slot sites on your laptop or desktop. It’s smooth, it’s fun to play, and it doesn't feel as repetitive in comparison to some other games.

Divine Fortune is a triumph in almost every sense of the word, and from top to bottom, it’s a slot that we would thoroughly recommend to both beginners and veterans alike.

It has a strong RTP, there’s a lot of money to be won, the bonus features are great and the design stays true to the theming.

They had a vision, and they nailed it.