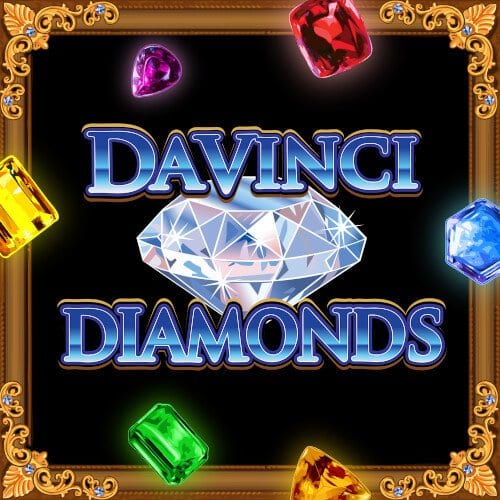 Looking back through the annals of history can often uncover many great philosophers, artists and revolutionary figures alike. In the context of this slot, though, the one we’re going to be focusing on is the legendary figure that is Leonardo Da Vinci. The Italian polymath has one of the most iconic names and legacies of any man, woman or child to have lived on this Earth, and as such, it only makes sense for him to be immortalised in the form of a slot game. Da Vinci Diamonds serves as a small yet significant tribute to an incredibly influential man, and while it may not be perfect, there are plenty of fascinating features that are bound to give punters young and old a real feeling of nostalgia. 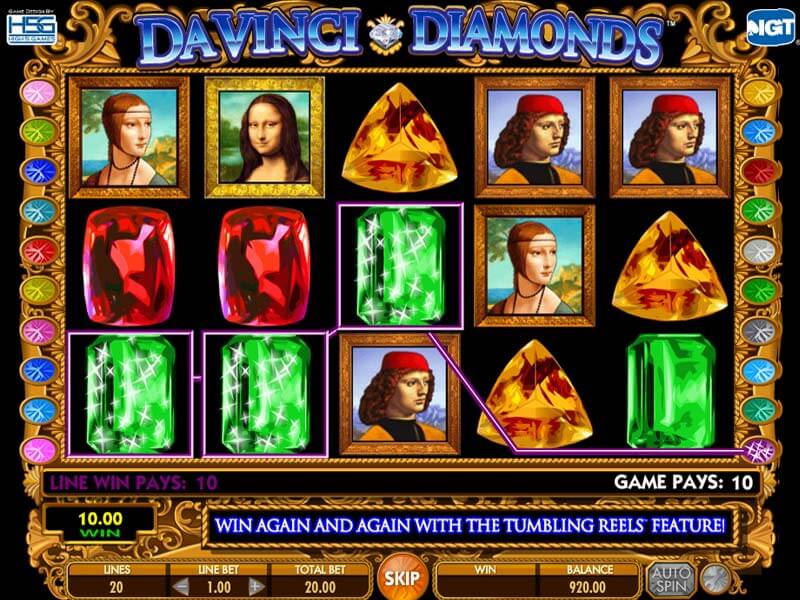 Having first hit the mainstream way back in 2007, DVD has spent the last decade-plus as one of the most formidable forces in the slots type games. It’s known for being one of the most popular slot products out there, which is a reputation that has been garnered over years of consistent play from slot machines to desktops and beyond.

This game, essentially, is a walking tribute to the best artwork and memories associated with Leonardo Da Vinci. It’s a walk back through time, and while that may not seem all too scintillating to some, its simplicity is one of the aspects that makes it work so well.

While the dual play sequel may expand on it, DVD sticks with the traditional 5×3 reel and ensures that they maximise every single bit of space they have on the board.

There are 20 paylines to work through in the game, and they’re marked by gorgeous looking gems down both sides of the layout.

Considering the nature of the game and the gameplay itself, many would view the RTP of 94.93% as being fairly generous. In the bigger picture, it’s pretty average, and it reiterates the fact that this game – as is so often the case with games found on IGT casinos – requires a whole lot of patience. That theory is all but confirmed with the volatility, which is viewed as being low to medium, which should balance the scales for most high rollers who take a look at Da Vinci Diamonds.

You can start off your journey with a minimum stake of 0.20 per spin, and if you’re lucky, you could travel all the way up to the glorious heights of winning 25,000 coins.

While it may not be the kind of game that you’d explicitly say is beautiful to look at, the theme is pretty obvious here: Da Vinci. They want to take out the chaos and drama of your standard slot game offering, and in its place, they want a satisfying visual experience for players who understand the meaning behind this man and what he was able to achieve.

The slot itself is still smooth, working off of the slot machine equivalent, and the soundtrack is subtle – as if you’ve gone to visit Buckingham Palace for the day and they happen to have a slot game available to play in the lobby.

There are no playing card symbols on display here because simply put, there doesn’t need to be. Players will be greeted with Lady with an Ermine, the Mona Lisa, the Da Vinci Diamond, a series of gems including amber, ruby and jade, and of course, Leonardo Da Vinci.

Da Vinci may be old school, but he certainly isn’t immune to the scatters and wilds we’ve all come to know and love. The pink gem is the wild icon in this one, substituting in for any symbol – aside from the scatter – to make that all important winning combination. With the scatters, there are actually three, giving DVD the kind of niche that most would say it doesn’t even need to succeed.

The Priceless Fien Art icons are the scatters in the game, and if you are able to secure four or more at any one given time, the payouts will begin.

The bonus round opens up the door for bonus spins, and it activates when you secure four or more pink icons. You get six free spins to kick off the festivities, with a potential 300 free spins being on offer.

We also have the Tumbling Reels feature which really does set Da Vinci Diamonds apart. If you get a winning combination, the icons on that reel clear away so that the ions above it can tumble down – giving players the appropriate payout. You can keep the train rolling until there are no more combinations to be formed, which should make for plenty of revisiting contenders.

The game isn’t known for having a progressive jackpot, but there is definitely still a pot of gold at the end of the rainbow for those that work for it.

Regardless of whether you want to play for free or you want to dig deep and throw some cash around, there is mobile compatibility for the Da Vinci Diamonds game. It doesn’t matter whether you're playing on a iOs or Android casino, because IGT is on hand to make sure you’ve got a fully functioning classic to enjoy. You can find Da Vinci Diamonds at any of the top online slot sites we listed on this page.

Patience is a virtue and that will trip up some new punters who don’t really understand what the hype is all about with Da Vinci Diamonds, but beyond the cloud of doubt comes the realisation that sometimes, less is more in the world of slots.

There are decent payouts to be won and fun times to be had, especially for those who would quite like to dive into the Renaissance era for an hour or two.

Whether or not the game threatens to get a bit boring after a while is in the eye of the beholder, but if you want to go back to the core of what slot gaming is really about, then this is one history lesson you shouldn’t miss out on.