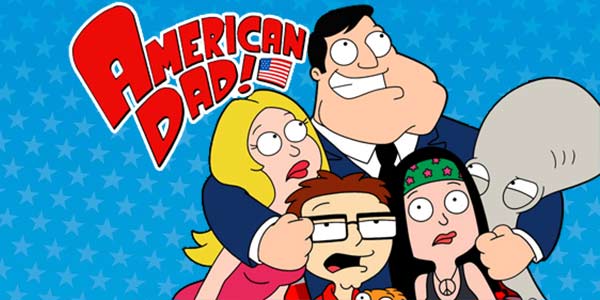 Good morning U.S.A. - we’ve got a feeling that it’s going to be a wonderful day! Sure, there may be people out there who prefer a bit of Peter Griffin in their coffee, but American Dad is the kind of cartoon television institution that will be around for decades and decades to come. As is so often the case with hit TV shows of the cartoon variety, there’s always a natural temptation to transform it into something more than that. In this case, that temptation has given Playtech the desire to create a slot game dedicated entirely to, you guessed it, American Dad. It may be unorthodox in the eyes of some, but the AD slot may just surprise you. 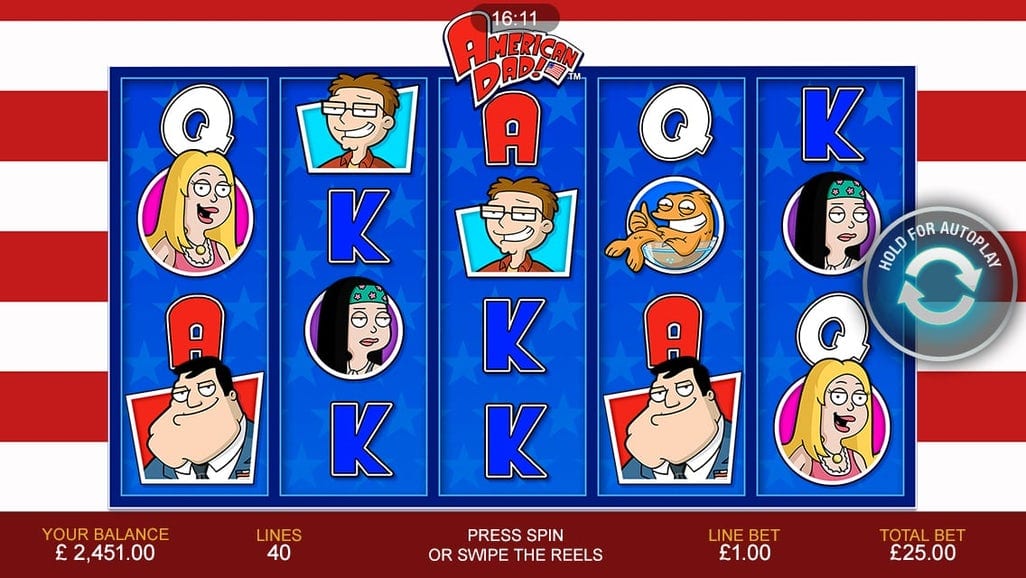 As we’ll detail later on in the review, the finer details and the additional features really do put American Dad ahead of many, many other slots both in and outside of this genre. At its core, the aim of the game is to match up the symbols and win decent chunks of money in the process. Of course, beyond that, fans of the show will bask in the glory of what is essentially a tribute to AD and everything we’ve come to love about the show over the years.

The layout is as professional as it is simple: a 5×3 reel that gets straight to the point and introduces us to the characters in a simple and effective way. There are 40 paylines for punters to enjoy and while that may not blow the socks off of everyone, it’s more than enough to get people feeling trigger happy – especially when you get a feel for what is to come as you progress deeper and deeper into the heart of this slot.

There’s a bit of a variation with the reporting of the RTP for this slot, which is the kind of inconsistency that isn’t going to appeal to all players. Nonetheless, a potential spread from 94.14% to 96.80% poses a few intriguing dilemmas for those who want to see whether or not they can pick up the sort of consecutive wins that will earn them the big money.

You can start off with a minimum wage of around 0.40, and from that point on, high rollers can follow it up into the hundreds before hitting a maximum stake. If you play your cards right, you could also be looking at winnings in excess of 750x your initial stake – which certainly wouldn’t qualify as a bad day at the office.

All they needed to do to make this a visual success was copy and paste the best parts of American Dad into the slot, and they’ve done just that. The backdrop of the American flag is brilliant, the characters are well fleshed out, and the colour scheme really does make us smile, as it encapsulates the joyful tone of the show.

We also love the soundtrack, with not so subtle hints of the theme song being played throughout your time if you're playing this on a site with slots. It’s important to keep punters as engaged as they possibly can be, and with a slot this slick and smooth to play, they’ve accomplished that goal in a big way.

The standard playcard symbols are there for all to see, but beyond that, the whole family is present in the game too, including: Stan, Francine, Hayley, Klaus and Steve.

American Dad has bonus features coming out of its ears which, as you’ve probably guessed by now, is the sort of commitment that really gets the motors running of slot enthusiasts around the globe.

The wild symbol is the one and only Roger the Alien who is able to replace all symbols on the reels aside from the Schmooblydong Bonus Wheel – yes, you heard us correctly. If you can land it on the first and third reels at the same time, you’ll trigger a respin. If you then land a symbol on the fifth reel, you’ll play one of five character’s feature games.

Stacking Stan – Extra stacks of Stan symbols are added to the reels below any existing Stan symbols, with the SB (Schmooblydong) bonus wheel determining how many Stans are added.

Roger’s Random Wilds – After Roger vomits random wilds on the free spins, the SB bonus wheel decides how many wilds are added per free spin (two, three, five or 10).

Francine’s Holy Grail – You have to help Klaus reach Francine’s Holy Grail, with Klaus popping up in random places on the reel during every single free spin. If Francine lands on a position with a patch on it, she will then transform into an expanding wild.

Hayley’s Progressive Multiplier – Everyone loves a progressive function, and this is no different. Hayley collects signatures on each bonus spins to increase the multiplier by ONE, with the SB bonus wheel deciding which multiplier you start off with in the game.

Have you ever been watching American Dad whilst simultaneously wishing you could play an AD slot game at the same time? The answer could easily be no, but even if that’s the case, that possibility is now on the table with Playtech making this a compatible game for mobiles.

American Dad dares to be great in ways that few slots do, and you can see the investment and effort that has gone into making it a success. In addition to being incredibly fun to play, there are some tasty winnings out there for punters to claim if they’re feeling lucky.

The RTP may not be the best and you could argue this format should instead be used for even bigger shows and movies, but we like the legacy that this slot is inevitably going to leave.