Ancient Egypt is a period of time that none of us have ever been able to truly experience, and if you have, then congratulations, you’ve just invented time travel. There are so very many stereotypes commonly associated with this part of history, and while some of them may be true, it’s important to portray it in an honest and respectful way. Today, we’re going to take a look at a slot that aims to do just that: Playtech’s Egyptian Emeralds. While it may not provide us with the most sophisticated or in-depth look into what life was really like back then, it’s the kind of theme that is always going to be popular in this industry. 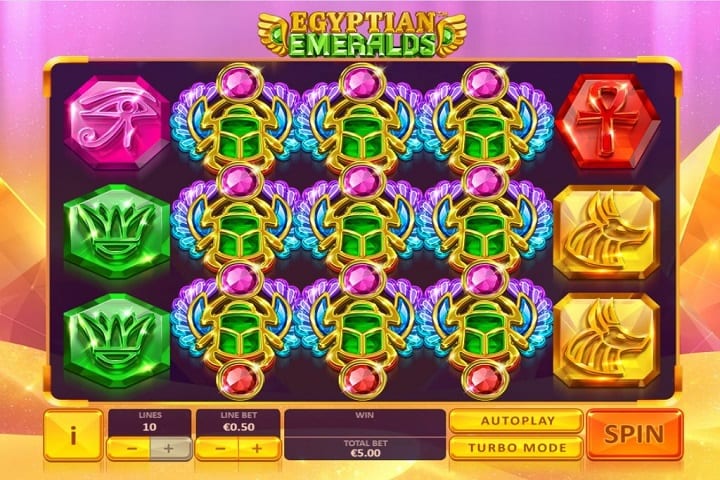 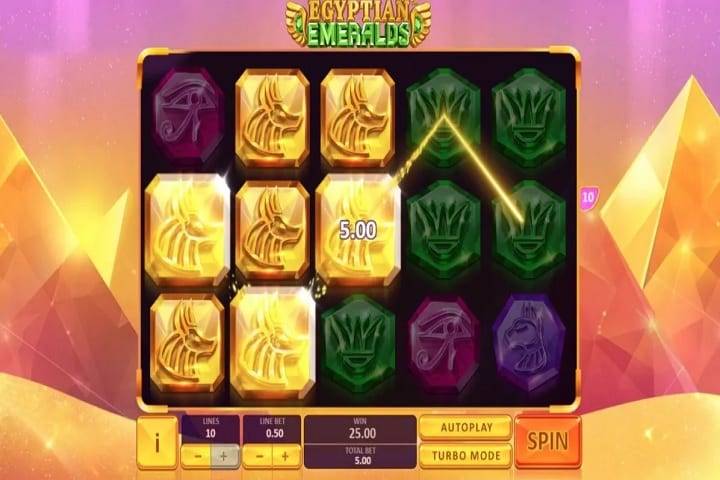 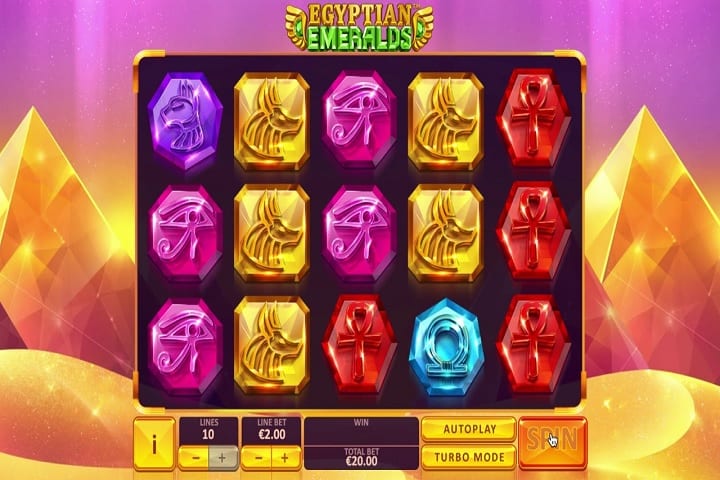 While the iconic nature of Ancient Egypt has been felt in many different ways over the years, we can’t imagine it’s ever been quite as colourful as this. Playtech has taken it upon themselves to go down the vibrant slot machine route for this game, and while that may be somewhat controversial, it certainly succeeds in grabbing your attention.

There are definitely ‘out of this world’ themes being used here that are quite intriguing, but above all else, this slot attempts to cut straight to the point: we’re here to have money and attempt to have fun doing it.

The board layout is quite compact, and while it does use the standard 5×3 setup, the symbols aren’t really given much of a chance to shine courtesy of the design.

There are 10 paylines to work your way through in this slot, which should ensure a calculated approach to the gameplay if nothing else.

We all get into this sector in an attempt to win a bit more money, because even if you appreciate the designs and the theming, walking away with some cash is the aim of the game. The importance of the RTP often comes into sharp focus when discussing that side of things and for Egyptian Emeralds, the RTP is decent enough at 96.36%. That’s above the standard industry average and with low-to-medium volatility, players should definitely anticipate frequent wins – even if they aren’t the most substantial.

Punters can get the ball rolling with this online slot at a generous minimum wager of 0.10, whereas those who are feeling a bit daring can put down a whopping 500 if they’re confident enough.

If you do wind up playing your cards right, then you could wind up with 200x your initial stake in the bag.

The shiny shots of the pyramids in the background feel a little bit unfinished, and we consider that to be us putting it nicely. It’s all well and good going down the route of the gemstones with the heavily themed slot machine feel, but you really do need to at least try and allow the audience to gravitate towards the subject matter. The soundtrack is okay, but most of the time it’s either too quiet or far too inconsistent with the message it’s trying to send.

Thankfully, the symbols don’t rest on the idea that playcards are essential to every single slot, and they’re instead formed in the shape of coloured hieroglyphics. The actual symbols themselves are the Palm Tree, Eye of Horus, Ohm, Bastet, Ankh and Anubis.

Everyone wants to at least try and sink their teeth into a bonus feature or two when they’re playing slots, mainly because they aren’t always getting what they need out of the base game. Alternatively, they’re enjoying themselves so much that they want to expand on what they’ve already done, but with Egyptian Emeralds, we fear it falls into the former category as opposed to the latter.

There are always points available for slots that dare to go outside their comfort zone, but we’re not actually too sure EE does that. There is a bonus feature available, but when you’re having to get out a magnifying glass in order to try and find it, that doesn’t necessarily tell us that the creative juices over at Playtech were flowing when this slot was in development.

The scarab beetle is the wild symbol, replacing any other symbols that may be on the board. The beetle is capable of appearing as a stacked wild on the reels, and if three of them appear on the middle three reels, you will trigger the Scarab Respin feature. What’s that, you ask?

You will first receive a free respin, and alongside that, all of the triggered wild symbols will shift to a random reel. If another stacked wild appears on the middle three reels again, you will receive another respin.

The jackpot isn’t progressive, as is the case with most slots these days, but there is still money to be won.

In addition to being one of the general leaders in the slot field, Playtech also likes to focus on making sure their products are suitable for mobile compatibility and their games can be found and played on some of the top mobile casinos in the UK. They’ve definitely managed that here with Egyptian Emeralds being compatible with iOS and Android devices, as well as the good old desktop and tablets.

Whether or not this is a game that stands out amongst the pack is entirely a matter of personal preference, but in terms of how easy it is to boot up and play, EE does seem to be quite practical.

Egyptian Emeralds is a ‘swing for the fences’ type of slot, and in this instance, it just didn’t really pay off for them.

It does feel quite lazy when compared with other slots of this nature, and we can’t pretend like this idea hasn’t been done before in far, far better ways in the past.

Simplistic games can rise to the top of the fandom if they’ve got particular niches that really improve the product, but we’re struggling to see anything of note here.

The RTP is okay and it’s not like you aren’t going to win any money, but in the present day, that simply isn’t enough for us.