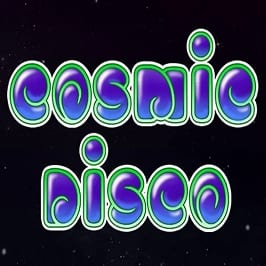 It turns out that isn’t just humans who want to go dancing. We all know that there are fun themes and genres to be found throughout the world of slots, some of which are universally loved and others that scope out a very niche section of the population. Today, we’re going to be taking a look at a slot that really does play by its own rules - and that slot is Playtech’s Cosmic Disco. 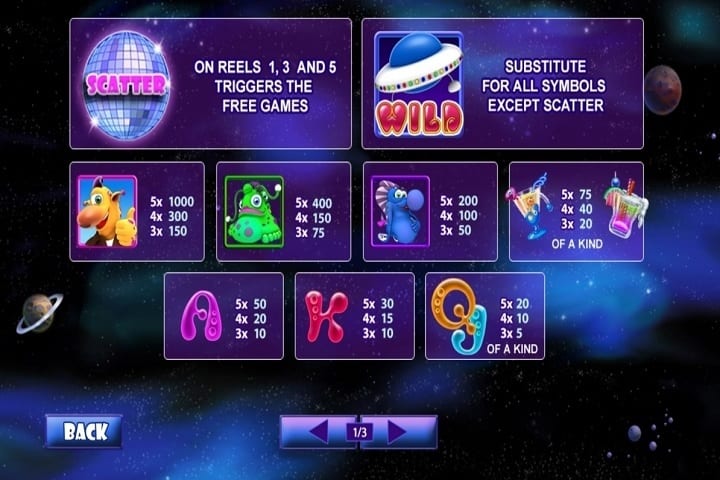 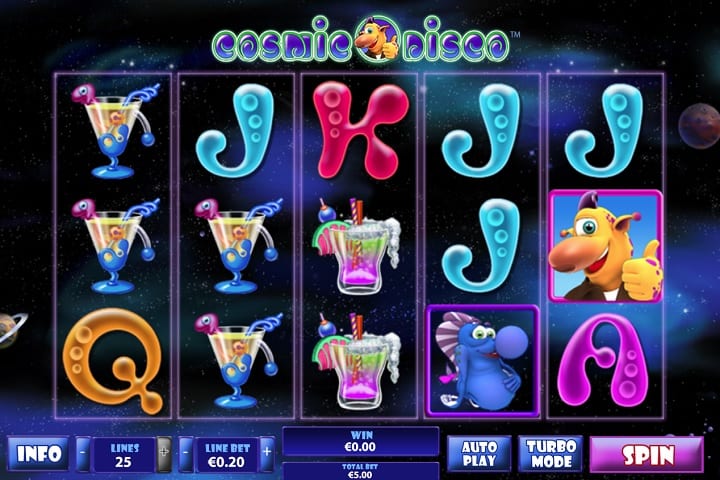 In these times of great uncertainty, one thing that we all miss is socialising with our friends. While it’s hardly the same thing, this throwback offering invites you to dance the night away. Alas, you won’t be doing so on Earth, because you’ll be doing so high up above in outer space.

It sounds a bit insane, but trust us, it’s going to be worth your time.

The aim of the game is pretty simple: find the matching symbols and win a good chunk of money, but have some fun while doing it. Cosmic Disco is so out there and so different that it doesn’t really need a base story to try and get punters interested because the name alone is enough to draw in the masses.

The layout is the definition of familiar at 5×3 on the reels and rows, with the symbols not even really taking up all that much room – giving the design work a chance to shine.

There are 25 paylines for players to work their way through, but again, there’s a whole lot more to this Playtech slot than initially meets the eye.

A whole lot of people like to obsess over the RTP as if it’s the one defining factor behind the success or failure of a slot. While we don’t quite believe that to be the case, it is an element of any slot that needs to be taken into consideration – because as we all know, earning big bucks is why we’re all here in the first place. For Cosmic Disco the RTP is actually pretty decent, coming in at 96.21%. That’s above the standard industry average, and it works well alongside the slot’s medium volatility. It means you’ll still see some solid returns in the winnings department, and you won’t have to wait all too long to get them.

Both high rollers and casual players will be intrigued by the betting range on this slot, as you can start off with a minimum stake of 0.25. From there, if you’re willing, you can put down a maximum bet of 500.

With top winnings of 1,000x your initial stake you aren’t going to be winning millions, but you’re definitely still going to have something to shout about.

The soundtrack to this slot is so simple, but perhaps that’s one of the reasons why it’s so unbelievably effective. One minute you feel like you’re in a nightclub, and then the next, you’re immersing yourself within the landscape of the entire galaxy. It’s both terrifying and thrilling at the same time.

The A, K, Q and J playcard symbols start things off with this slot, being designed in line with the theming. From there you’ve got the yellow, green and blue aliens that serve as the main characters of CD, as well as two alien cocktails that we’d actually quite like to test out for ourselves.

Bonus features tend to be viewed as the backbone of any given successful slot, and regardless of whether or not you think that’s fair, adding some extra games on does tend to make the process of trying to win money a bit more entertaining. Cosmic Disco doesn’t really push the boat out in that regard which could wind up being a point in the negative column, but really, it all comes down to personal preference.

The yellow alien is the most lucrative symbol of them all in the base game, but if you do want to mix things up a bit, focus your attention on the flying saucer – because that’s the wild symbol. It substitutes itself for all of the other symbols aside from the scatter, and it is capable of appearing on every single reel that isn’t the first one.

Beyond that, though, the big main attraction is the Free Games feature. If you want to trigger it, you first need to hope the glitterball scatter pops up on reels one, three and five in the base game, and if that happens, you’ll be rewarded with a tasty 16 free spins. Of the first eight of those spins, wilds lock into place and turn into sticky wilds when you land on the middle three reels. Then, in the second half of your adventure, extra wild symbols can land on the 5th reel to help your increase your winnings even further.

The jackpot isn’t progressive for this game and you could argue that if the potential for even higher winnings was on the table, then it could’ve been a much stronger idea from top to bottom. After all, there’s a whole lot you can do with aliens.

Desktop gaming is all well and good, but all signs point towards mobile casino slots being the most popular platform of them all. Cosmic Disco runs pretty smoothly regardless of whether you’re on your tablet, laptop or phone, but in this instance, it does feel like making it compatible for iOS and Android devices was done more so to make sure the current generation carries on playing.

Cosmic Disco is an entirely harmless online slot that doesn’t shoot too high and doesn’t shoot too low. There’s a distinct lack of creativity on display in terms of what they could’ve done with the bonus features and some aspects of the design work, and perhaps that’s something Playtech needs to consider if they dip their toe back into the ‘space’ theme in the future.

Still, there’s money to be won, and there are some good times to be had.