It doesn’t always have to be something you know that gets you invested in a slot game - it can be something mysterious. Playtech is the kind of game provider that often seems to thrive on giving fans unique slots that everyone can enjoy. Whether you’re a teenager or you’re a slot veteran, the core goal is to intrigue and excite punters from all over the world. While it may be unconventional, we believe Blue Wizard is unique enough and fun enough to gain some real steam from both beginners and experienced players alike. So, with that being said, it’s time to step into a new reality and learn more about why exactly we should be investing in the past, present and future of BW. 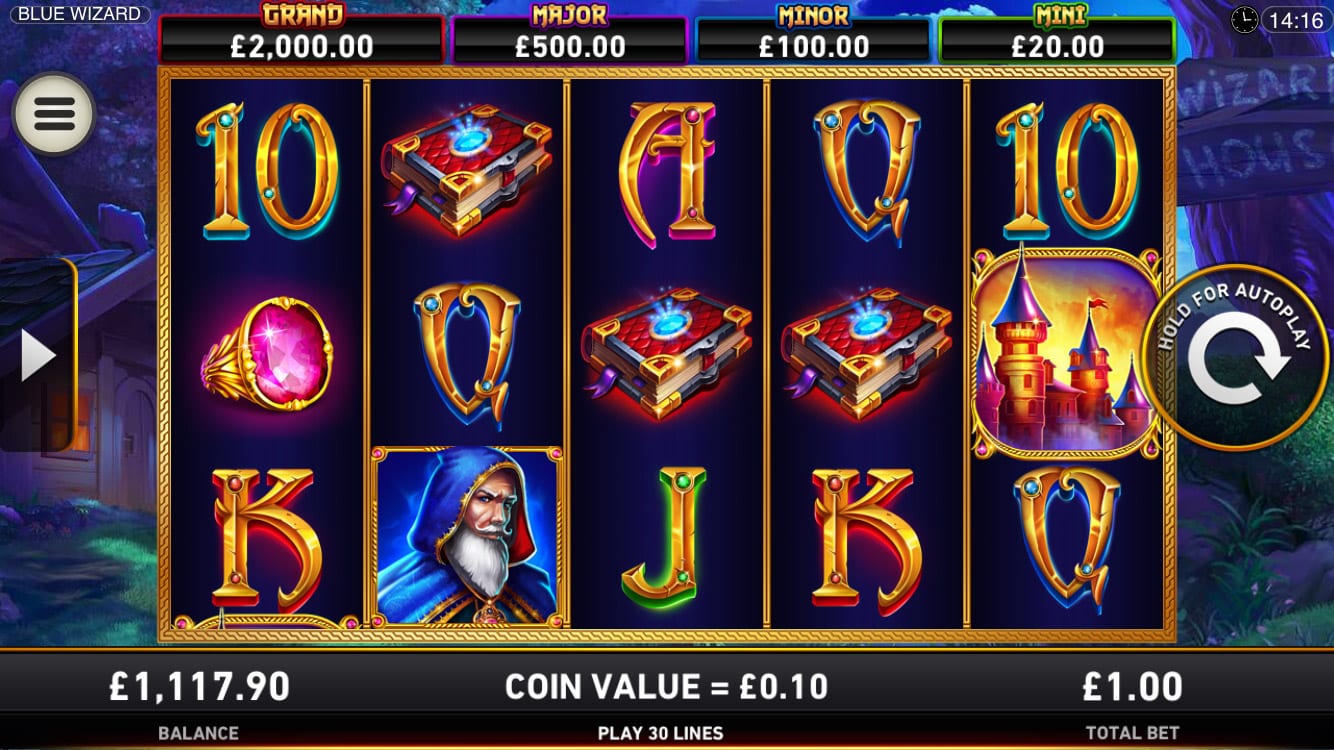 This game focuses on one central theme above all others: fantasy. We’ve all explored the idea that there’s more to life than what we’ve been told or what we’ve read about in books, but few of us ever actually allow ourselves to truly believe. In Blue Wizard, you can immerse yourself in the kind of utopia that is bound to keep any of us on our toes.

The layout is simple, grand and to the point: a 5×3 reel that commands your attention with a strong structure that covers 80% of the whole screen. Some may think it’s not an interesting enough concept to be given such a platform, but they’d be wrong.

There’s a whole lot of flexibility on offer with this slot, which is obviously always going to appeal to the masses, with 30 paylines to work your way through from beginning to end.

The dreaded RTP follows every slot around like a bad smell, but it’s the kind of statistic that does more than you could possibly imagine for the allure of slot games and their overall appeal. The RTP for BW rolls in at a really respectable 96.50%, with a medium to high volatility that is quite clearly designed to bring in the seasoned slot site lovers that want to sink their teeth into something major – and trust us when we tell you that this slot fits the bill nicely.

You can start off nice and low with this slot, rocking up with a minimum stake of 0.10. From that point onwards, you can increase that stake until you reach a mouthwatering maximum of 500.

Nobody can predict whether or not they’re going to win big, but if you do, there could be a whopping total of 2,000x your initial stake as the end prize.

In addition to the blue and gold trim being a great colour scheme for this slot, we also enjoy the eerie nature of the soundtrack. Yes, they play off of the fantasy idea, but they aren’t afraid to mix in some Halloween tones to really give us the impression that the Blue Wizard’s abilities go above and beyond anything we’ve ever seen before. The slot itself is really smooth, and you could even argue that it’s quite relaxing when compared to some of Playtech’s other games.

Whether or not that theming stands the test of time is another matter altogether, as we could see a scenario in which this is passed off as being a slot that is too big for its boots.

10, J, Q, K and A are the standard playcard symbols that appear, right alongside the mystical cauldron, spell book, owl and ring.

The wilds and scatters are available for punters to enjoy with the Blue Wizard himself playing the role of the wild, the magical castle being the scatter and the crystal ball being the general bonus symbol.

The wild can substitute for any and all other symbols on the board, with a scatter symbol potentially boosting your winnings by up to 50x depending on how many appear on the reel. The crystal ball bonus, however, can also get you up to a 50x multiplier – and when six or more become available, the Fire Blaze Respins feature will be unlocked, thus triggering the possibility of the Fire Blaze jackpots.

There are four on the table to win in regards to the fixed jackpots, starting off with the Mini (20x your stake), and leading on to the Minor (100x your stake) and Major (500x your stake). Finally, the cream of the crop is the Grand Jackpot which will give you 2,000x your initial stake. In order to acquire it, you must first fill all 15 symbol positions with the elusive crystal balls.

Mobile casinos are such a huge part of the modern slot market and it’s not exactly hard to see why, with everyone under the sun attempting to find the next big thing that’s going to blow the socks off of players both young and old. Whether or not Blue Wizard achieves that goal will have to come down to the gameplay itself because as is the case with most other slots in the present day, it is compatible with iOs and Android devices alike.

There’s an argument to be made that it’s a bit more fluid and smooth on the desktop, but it all comes down to personal preference.

Blue Wizard may be a little bit too tame for some, but given what it sets out to achieve, we wouldn’t hesitate to suggest that this game goes above and beyond the expectations of many.

In such a crowded field it’s all about standing out, and that’s what BW does with a unique take on jackpots to go alongside a fun theme that can be picked up by anyone.

While it may not be dull and it may not be boring, it’s certainly a bit more niche than most slots out there – and that can be a tricky place to be if you want to stay consistently relevant.