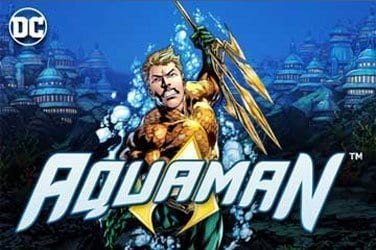 Sometimes, suspending your sense of reality and taking a deep dive into a world beyond our own is what we all need to unwind. That’s true in life, but more specifically, that’s true in the gaming genre. One of the core reasons why we all like to become engrossed with this field is larger than life storytelling that makes us feel as if we’re taking part in something bigger. It always helps when you’re backing the underdog, too, and that’s exactly what we think of when we talk about Aquaman. He’s never been viewed as the biggest or the baddest superhero of them all, but he holds a special place in the hearts of millions across the DC universe and beyond. Today, we’re going to take a look at whether or not Playtech has been able to do everyone’s favourite underwater hero justice.

Aquaman follows on from the lineage created by Batman, Green Lantern and Wonder Woman, all of whom have their own slot game for DC fans to enjoy. In this landscape, however, there’s no time to settle down and get comfortable, as the player is thrust into a scenario in which you have to assist the King of Atlantis and his wife Mera as they battle against the forces of evil – also known as the supervillains that attempt to thwart them at every available opportunity.

Regardless of what screen you’re playing on, the 5×3 reel system works really well. You get a good idea of what the characters are like, and there’s more than enough room for a nice backdrop that both relaxes the player and transports you over to the sanctuary that is Atlantis.

There’s a whole lot to unpack in terms of the potential winnings, too, and while we’ll expand on that later, it’s always good to know that there are 243 paylines available – which should keep punters coming back for more.

When it comes to the RTP, Aquaman rolls in at a fairly respectable 95.99% with 0.99% being attributed to the jackpots, which we’ll come on to later. It’s also a slot that seems to pride itself on having low volatility, which should ensure that there are plenty of smaller winnings for everyone to enjoy, even if it takes a while to build your way up to the bigger earnings.

You can start off with a pretty low 0.25 as a minimum wage on this slot, and if you’re feeling lucky, there’s the possibility of riding all the way up to 500 as a maximum bet per stake. On top of that, there’s a chance you could win up to 2,000x your initial stake – which is enough to leave anyone’s jaw on the floor.

It’s all about battling back against tyranny in this particular slot, which actually does a really good job of setting up the theming from the mysterious soundtrack to the ‘in your face’ nature of the characters. The 10, J, Q, K and A play cards make an appearance, right alongside Aquaman and Mera who serve as the top symbols in the game, closely followed by four villains from the underwater realm.

Some will argue that the stereotypical nature of the standard comic book style is a bit too childish for most punters, but Play tech has done a wonderful job of pushing back against that ideology. In its place, they’ve created a mature and appropriate progression as the DC universe continues to grow.

Whether it be the Trident Wild Re-spins or the Ocean Rush Re-spins, you’re likely to get what you want in some way, shape or form from the bonus features. The Trident Wild is triggered once Aquaman lands in a full stack on reel two, with Aquaman throwing his trident onto the reels to transform three reek positions into wild symbols. The re-spins will then go on until a win takes place, whereas with the Ocean Rush, the re-spins are triggered when a full stack of good old Mera lands on the fourth reel. One symbol is then locked in place, with re-spins going on until you get that all elusive victory.

There are free spins up for grabs, too, with three, four or five scatters leading to 8, 12 or 16 free spins. During this time Aquaman will turn into a golden symbol, adding an extra element of intrigue into proceedings. Whenever you collect an Aquaman, one of the four villains on the reels will be replaced by an Aquaman symbol for as long as the free spins go on – but it’ll only be the original Aquaman symbols that count in this instance. Of course, everyone loves the multipliers available with a good wild, and with AM, you could increase your wins by 2x, 3x or 4x.

Oh, and in case that wasn’t enough, there are four progressive jackpots to be won, and the jackpot bonus game can be triggered on literally any spin. A grid with 20 spots will appear alongside collection counters for the jackpots, with the aim being to get as many matching icons as you can. From there, the guidelines for the bonus game are as follows.

As you can probably imagine, the latter brings in the most money.

Many fans enjoy the larger, more complete desktop view with this slot, mainly because they consider it to be a lot prettier. Still, it rarely matters in the eyes of the punters, which is why the condensed mobile visual works just fine for the majority.

The slot is available across all iOs and Android devices, which will be music to the ears of the modern generation of gamers who play on mobile casinos.

Aquaman may not be the perfect slot, but it’s a damn good effort from Playtech, and even that is an understatement.

The game has been put together nicely, the storyline is easy to follow, and it certainly does justice to one of the Justice League’s most undervalued members. Plus, with progressive jackpots and regular winnings, getting bored isn’t really an option.