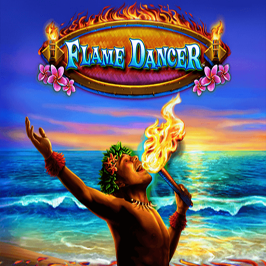 We’ve all thought about jetting off and forgetting all about the stresses of day to day life, but the majority of us can’t drop everything and be so impulsive. Still, whenever that fantasy happens, it’s always nice to become immersed in the idea of going somewhere special - like Hawaii. It may seem like an island that is a million miles away, but striving to visit somewhere so special is what can motivate us to actually get up and do what we need to do for that dream to become a reality. 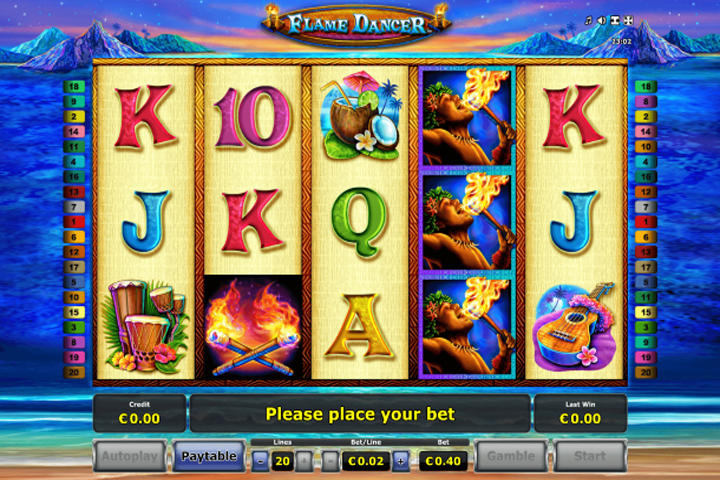 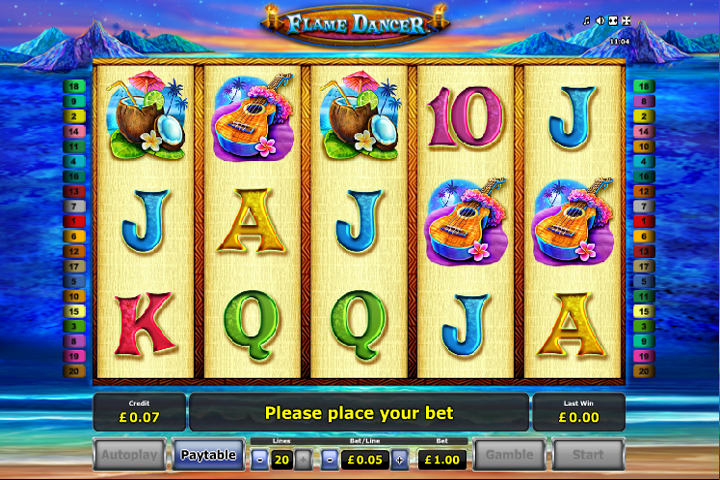 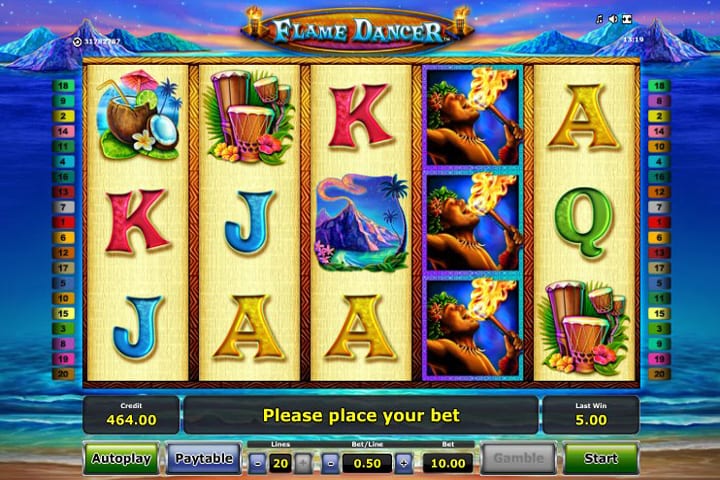 Today, we’re going to take a deeper look at a slot that focuses on one of the most intriguing occupations for those who reside there: Flame Dancers.

It’s not exactly a job role we all tend to pursue, but nobody can deny how awe-inspiring the process seems to be.

As the Hawaiian sun sets, we are invited on a journey by Novomatic that allows us to try and win some cash through matching symbols – and have fun doing it.

While it may not become immediately apparent that we’re stepping into paradise, there’s certainly a feeling of escape that comes with playing this slot. In association with that, though, there’s also a feeling of danger – and that serves up quite the collection of thrills.

The layout doesn’t threaten to take away from the design work of the slot with a 5×3 reel setup, allowing the symbols to really stand out throughout the gameplay.

There are 20 paylines for players to work their way through with all 20 being displayed on either side of the board, but as is so often the case, that doesn’t tell the whole story.

It’s clearly important to know the ins and outs of the slot site game you’re going to be playing, and more often than not, punters in the modern age want to take that a step further by figuring out the RTP. The return to player percentage can you a decent idea of what you can expect to win, and Flame Dancer is no different. The reported RTP comes in at 95.29%, which allows FD to sit in the middle of the pack around the standard industry average. It’s not the best RTP in the world, but with medium-to-high volatility, there are certainly some significant wins lurking beneath the shadows.

While the minimum and maximum betting amounts are disputed, which is never a good sign, it appears as if you can put down up to 4,000 coins depending on the paylines.

If you’re particularly lucky, and you make your way all the way through to the volcano, you could be taking home an outrageous 400,000 coins.

The tribal and cultural nature of this slot comes pouring out during the soundtrack, and while it does give us quite the education, it also hypes us up and builds the tension of the slot nicely. The animation on the reels themselves is formidable and makes for a nice visual, but in terms of the overall design, it does feel like they could’ve gone a step further.

Flame Dancer falls into the same stereotypical web that many other slots do with the symbols by giving air time to the standard playcards from 10 all the way up to A. From there we have a few themed symbols such as the coconut cocktail, guitar, bongo drums and the famous volcano.

There always tends to be some kind of bonus feature in most slots these days, because if all you’ve got is the base game, there’s a good chance punters can get bored pretty quickly. Still, as we all know, it’s important to find the happy medium – because if you put on too many extra features, players can turn off just as quickly.

FD has a wild symbol in the form of the actual Flame Dancer, and the wild is able to land on the 2nd and 4th reels on the board. It is capable of filling either one or both of the reels when it lands, turning it into an expanding wild in the process. On the flip side we’ve got the flaming torch, which is the scatter symbol for Flame Dancer.

The most popular feature in the entire slot is the Free Game feature, and if you want to trigger it, you’ll have to land three or more of the aforementioned flaming torch symbols on the reels – on the same spin. From that point you’ll start off with seven free spins, but don’t worry, because there’s always the potential for more.

While the wild can expand on all of the reels, the volcano, cocktail, guitar and drum can also do the same on reels 2 and 4. You can also re-trigger for more free spins, meaning you could secure a maximum of 14.

The jackpot isn’t progressive, but given the big money winnings that are available, you probably shouldn’t spend too much time complaining.

It isn’t the smoothest of games on the mobile, and it does have a few glitchy moments here and there, but Flame Dancer is compatible with iOS and Android devices. It’d be great if you get the chance to test it out when you’re actually on holiday in Hawaii, but we imagine the experience would be just as realistic if you were on a beach in Gdansk or Weston-super-Mare.

Flame Dancer encapsulates the laid back, chilled out spirit of the Hawaiian people, and it does so with a slot that could win you some serious money. The layout isn’t perfect and the design work needs some improvements, but this is a pretty harmless slot.

They could’ve done with one or two more bonus features if they were serious about competing with some of the ‘grander’ Novomatic offerings out there, but above all of that, this slot is fun.

When you weigh up the pros and cons, we’d actually say that this slot overdelivered based on expectations.

On an unrelated note, we’ve booked our next holiday.