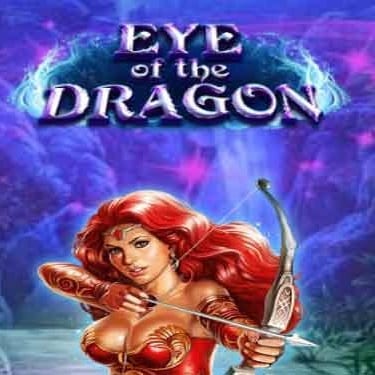 Eye of the Dragon

One of the joys that come with fiction, and anything ‘fantasy’ related, is that it allows us to escape our own world and immerse ourselves in something different. Many of us drift through our daily lives without all too much excitement, and when you live a lifestyle like that, it’s safe to say that society can get pretty tedious. In order to rescue that lingering sense of joy and hope, we turn to different forms of entertainment to keep us going - such as video games, movies and TV shows. 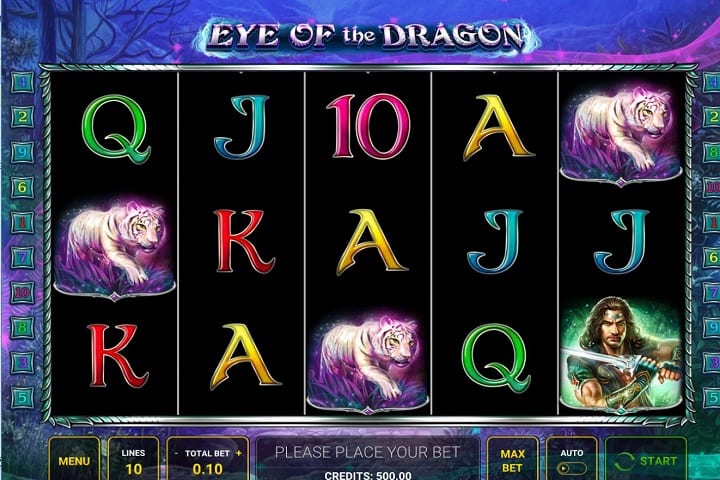 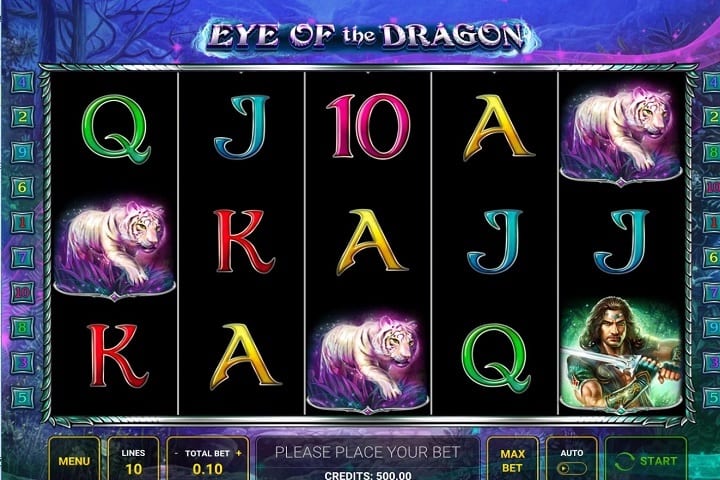 Some, however, throw some money into the equation, most notably through slot gaming. Today, we’re going to take a look at one such example of that with Novomatic’s intriguing Eye of the Dragon slot.

The aim of the game is to find those winning combinations and walk away with the kind of money that you’d expect to acquire from such an alluring slot. We all know that the dragon is one of the most popular mythical creatures out there, as Game of Thrones has decisively proven, but Novomatic clearly wants to expand on that. Whether or not they’ve done so successfully, though, comes down to the perspective of the player.

The 5×3 reel setup is a safe choice for Eye of the Dragon, although it doesn’t exactly leave much to the imagination in terms of the overall design – which we’ll speak about in more detail later on in the review.

There are just 10 paylines to work your way through in this game, but if you play your cards right, 10 is all you’re going to need.

When you’ve got a slot that prides itself on theming that relates to one of the most popular genres in film and TV, you’d expect them to go hard or go home. That ideology tends to match up well with a higher RTP, and with EOTD rocking up with an RTP of 96.12%, it more than qualifies as an intriguing slot. That kind of number requires the average punter to be patient, but when the moment comes, it’ll be more than worth it.

Plus, and the importance of this cannot be overstated enough, it’s viewed as a highly volatile game – which should serve as music to the ears of high rollers everywhere.

It’s easy enough to get into the rhythm of things with this slot, starting off with a minimum bet of 0.10. You can take that all the way up to the maximum 50 mark, which may disappoint those who like to push for triple figures.

Still, they aren’t likely to stay away for too long, especially when they learn that they could be in for a maximum of 5,000x their initial stake in winnings.

The soundtrack and general effects stand out in this slot, as Novomatic really does take the necessary steps to make it feel like you’re in an incredibly high pressure situation. Some slots like to focus on the fun side of it all, but sometimes, you need to understand the stakes involved.

The animations have been done really well alongside the actual symbols, but the gameplay itself isn’t the smoothest with a real lack of finesse felt once you’ve actually started playing. The backdrop is colourful and mysterious, but it doesn’t really invite us to explore the setting as much as it probably could.

A, K, Q, J and 10 playing cards all make an appearance as the lower value symbols, and from there, we build up in value with the white tiger, white horse, male warrior and red-headed female warrior.

Everyone needs a good bonus feature or two if they want to deem a slot worthy of their time, and while the offering from Novomatic is limited with Eye of the Dragon, there are a few elements that could be worth your time.

You can’t have a game with this name without the eye actually appearing, and of course, it does pretty frequently with the green dragon’s eye being both the wild and the scatter. It substitutes itself for all other symbols on the reels, and it definitely stands out amongst the pack.

If you get three on a payline you will receive 2x your initial stake, if you get four then that will be increased to 20x, and five eyes will mean that you’re taken all the way up to 200x your initial stake. There, you will also be able to step into the Free Games feature where you will be given a generous 10 free spins.

Before the process begins, one random symbol is chosen to become the expanding symbol. It will then expand to the point where it takes over the whole reel that it lands on, and if you pick up a few on any given free spin, you could find yourself with a screen packed to the rafters with the same symbol.

The jackpot isn’t progressive on this slot, but there’s still a whole lot of money to be won.

One thing that the modern era of slot players simply cannot stand is when slots don’t really function at their full capacity, and when you consider how important wifi is in the present day, it isn’t hard to see why. Thankfully, EOTD is compatible with iOS and Android devices, and it’s actually a little bit more fluid than it is on the desktop.

Eye of the Dragon has a lot of nice initial ideas, but it doesn’t really flesh them out in any way, shape, or form. The high volatility nature of the slot is always going to make it popular with the big money punters, but if they come for the money, they probably aren’t likely to stay for the experience.

Competing with some of the best fantasy slots out there is a tough thing to do, especially if they’re themed to an existing brand or franchise, and EOTD just can’t really compete.