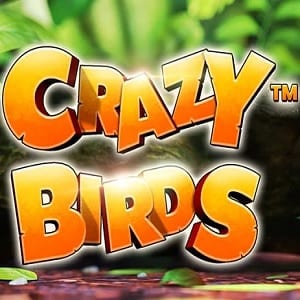 Slot gaming may not be everyone’s cup of tea, even in the betting world, but nobody can deny that there are some seriously fun slots out on the market now. The key to unlocking the golden ticket of slots isn’t exactly one-dimensional, either, because entertainment can come in many different forms. Of course, in our opinion, it always helps when you’re able to blend together the art of expressive colour and uniqueness. 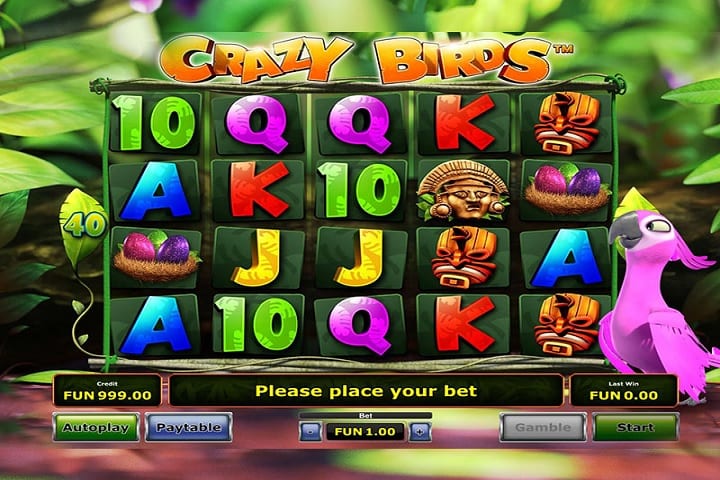 Today, we’re going to take a look at a slot that really does set itself apart from the rest in more ways than one: Novomatic’s Crazy Birds.

It may not have the kind of name that instantly appeals to the masses, but trust us when we tell you that it has a few surprises up its sleeve.

We’re transported to a gorgeous tropical island for the purposes of this game, taking us out of our day to day lives and thrusting us into a modern day Disney-style paradise. We follow the adventures of three birds as they all attempt to win the affection of Candy, the classy pink parrot that greets you upon loading up Crazy Birds.

From the initial spins all the way through to the parade of bonus features that we’ll touch upon later, there are very few things not to like from the word go about CB. Alas, as we all know, the majority of punters now want to know about the facts and figures before they commit to any extended gameplay.

We kick things off with a 5×4 reel that doesn’t really dominate the screen all too much, and that’s probably because it doesn’t need to. We’re able to get a full glimpse of the beautiful backdrop, really setting the scene for a relaxing experience.

There are 40 paylines to enjoy that are all fixed, meaning they cannot be adjusted, but the story of the Birds doesn’t end there.

Focusing on the RTP will continue to be a prevalent source of information for any and all slots that possess real potential, mainly because those are the details everyone feels like they really need to know. The reports vary for Crazy Birds in this department, with an RTP that seems to fall between 95.03% and 96.20%, and while you can take whatever you want from that, only just scraping above 95% does seem to indicate that it won’t stand out amongst the pack – and that theme is maintained with medium volatility.

It’s pretty easy to get started with this slot, though, as you’re able to place a minimum bet of 0.20 as you begin your journey into the island. From there you can work your way up to a maximum bet of 40, and while it may not hit triple figures, that’s still a nice, conservative amount.

But fans shouldn’t buy into the idea that there aren’t decent winnings on the table, as the average punter could walk away with up to 500x their initial stake if they strike gold. The base game payouts, however, only manages to hit 12.5x your initial stake.

The animation of this slot is on a whole other level and really does give off the feeling of something that has been created in the name of Pixar. It’s really difficult to make players feel at ease when gambling these days, and yet, Novomatic have managed it by creating a soothing yet exhilarating environment that genuinely belongs on a video game console. Plus, and this can’t be understated, the soundtrack is just really fun.

The A, K, Q, J and 10 playcards make an appearance, as they do in most slots, before we move on to the big players: the eggs, masks, relics and gold coins. It’s not much, but when you’ve got the 3D element alongside a whole lot of colour, you’re off to a good start.

Bonus features can so often make the world go round, and they certainly do with Crazy Birds, with the games being focused around the main characters: Candy, Potty, Rocky and Loopy. The lovely Candy is the wild symbol and replaces all other symbols in the game apart from the two scatters – the Pool Party and Free Spin symbols.

The Potty feature comes into effect when Potty pops up randomly on a base game spin, adding more Candy wild symbols onto the reels. If you aren’t able to land a winning spin, Rocky will then enter the conversation in order to smash non-winning symbols to make room with new symbols, eventually landing you a nice win. The symbols will continue to be smashed until no more wins are available, which sounds like a pretty good deal to us.

The final feature of the three is, of course, Loopy. It is triggered randomly when the symbol appears after a non-winning spin in the base game, which brings the prize wheel into effect. You can spin it to win cash prizes, a guaranteed win spin, or two more bonus features: Pool Party and Free Spins.

In the Pool party, which is activated when the scatter symbols pop up on the first and second reels, you can choose one of Loopy, Potty or Rocky to fall through the pools in order to collect prizes. It sounds random, but somehow, it works.

For the free spins bonus, a trigger will come when the scatter symbol lands on the fourth and fifth reels. You’ll then be given five free spins, and if one or more Candy wilds present themselves, then Candy will give you a few more wilds to increase the likelihood of your winnings going up.

The jackpot isn’t progressive, but when has that ever thrown you off?

The mobile gamers amongst you will be ecstatic to learn that CB is compatible with iOs and Android devices, ensuring a smooth gaming experience for all regardless of their platform.

Crazy Birds is one of the most visually pleasing games we’ve played in a while, and for that, a strong tip of the cap must go in the direction of Novomatic.

Unfortunately, that doesn’t quite make up for severely inconsistent low winnings – unless you get lucky in the bonus feature – as well as an RTP that doesn’t blow our socks off.

It’s good, but it isn’t great.