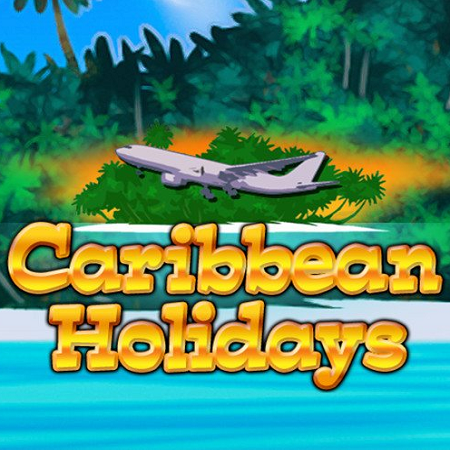 Everyone needs a break from time to time, right? Everyday life has a tendency to get pretty stressful, and as a direct result of that, we all like to jet off someone in order to forget our troubles and indulge in fun and relaxation - whether it be for a few days or potentially even a few weeks. While some of us will simply head on over to a local holiday spot, others may push the boat out even further, with the lucky few flying on over to the Caribbean. We can’t pretend we all know what that feels like but in order to try and give us a flavour of it, Novomatic has created a slot that quite literally focuses on Caribbean Holidays. Today, we’re going to see whether or not this slot does the destination justice. 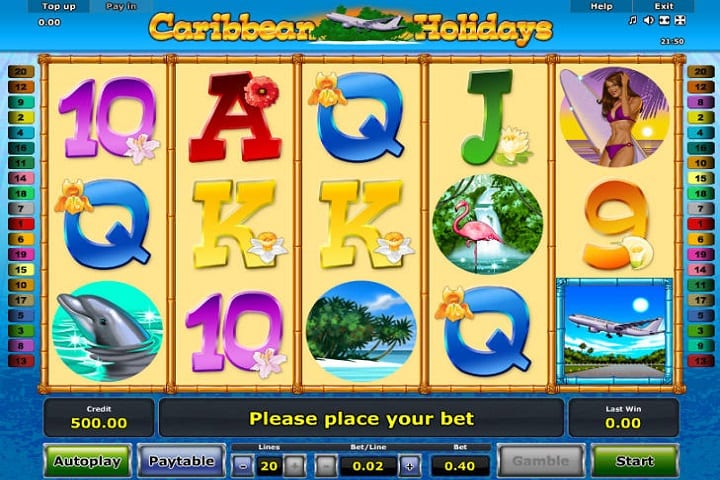 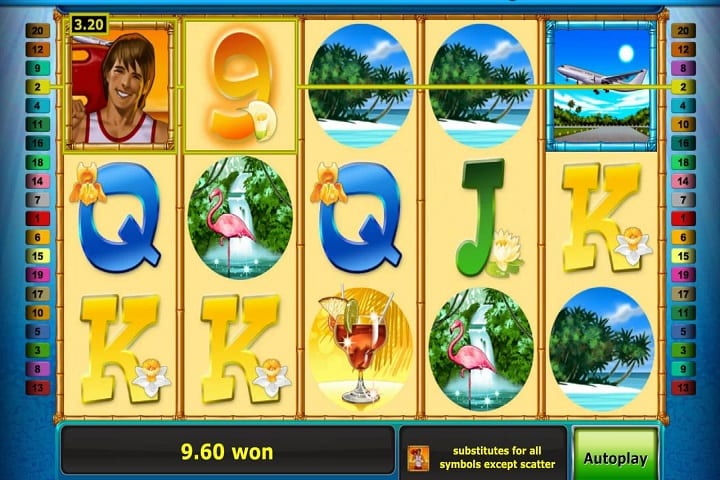 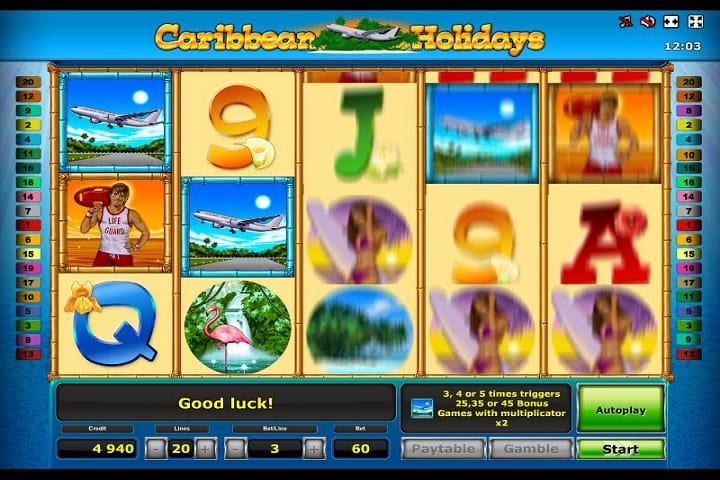 Sitting back and embracing the sunshine, perhaps with a Pina Colada in our hand, is the literal definition of ‘living the dream’ in the eyes of many. Of course, even if you aren’t a big drinker, there’s still a whole lot to enjoy from a holiday in paradise – which is the essence CH tries to give off.

As you work your way up through the symbols, that we’ll come onto later, you will slowly but surely build up increased winnings – which, at the end of the day, is the main aim of the game. From a first impressions point of view it does come across as quite a basic design, but perhaps there’s more to this slot than initially meets the eye.

The 5×3 themed reel should allow for more intricate ideas to come into the background as well as the foreground, but as we’ll come on to later, they don’t really follow through on that.

There are 20 paylines available to players, as you can see down either side of the board, but you do have the choice of activating just five or 10 lines instead.

The RTP of any game can make or break how a punter views it, if only to see whether or not they think it’s going to be worth playing for an extended period of time. Unfortunately for Novomatic games and CH, it falls short of the mark in comparison to some of its competitors with a reported RTP of around 93.01%. If you like big risks, though, then this could be the one for you, but we’re not so sure we’d recommend this as one of those slots games to ‘go big or go home’ on. It’s considered to be a game with medium volatility, too, which should bring in a few steady Eddies here and there.

It’s possible to start off with a pretty low minimum bet, although the data is pretty inconsistent with some suggestions being that you can put down 0.50, with the high rollers being happy to hear that you can go all the way up to a huge maximum bet of 1,000.

If you’re looking for the real big money, though, you’ll be excited to hear that there is a whopping 110,000 coins available if you manage to have the game of your life.

While they’ve put some effort into the 3D style symbols themselves, this slot really does fall short of the mark with the visual side of things. It just looks a little bit unfinished, and given the subject matter, you’d have to think they could’ve gone a whole lot further than they actually did. The way in which the reels move, or don’t move, is also pretty slow, and yet somehow it still winds up being one of the laggiest slots we’ve ever played – despite the fact that all signs point towards it being smooth.

Some may quite enjoy the simplicity of this slot, and we can understand why if you’re going on the hunt for big winnings, but it just isn’t for us.

The playcards make an appearance as the lower-value symbols from 9 all the way up to A, before we move on to the themed characters: a dolphin, a flamingo, surfer girls, and even a cocktail.

Bonus features can help a slot to thrive or fail, if only because most players these days want to play a game that is going to have multiple layers for them to enjoy.

In this slot the male lifeguard plays the role of the wild symbol, being able to replace any of the other symbols in the game aside from the elusive scatter – with six figure prizes being available if you can find five of him.

The jumbo jet, on the other hand, is the scatter symbol, and is the highest paying symbol of the game. In addition to being able to give you more than you bargained for financially, it can also provide free bonus rounds. If you manage to secure three or more jets you will receive 25, 35 or potentially even a bonus of free spins all the way upto 45 – depending on whether you find three, four or five. Oh, and in a pretty insane twist, the flying jet could also wind up giving one lucky player a free trip to the Caribbean. No, we aren’t kidding.

The jackpot isn’t progressive, but in truth, this game offers you so much more than that.

This game will automatically adjust itself to fit in line with your iOs or Android device, with it being made mobile compatible by Novomatic. It may not be the prettiest of slots, as you’ve probably guessed by now, but it’s probably a bit more fluid than it is on the desktop.

From a design perspective, this is not a great slot game, and it may not even be a very good one. The RTP also isn’t ideal meaning that you’re going to have to be pretty patient, but if you do manage to see it through, there could be some tasty prizes on the horizon.

This definitely feels like a slot that falls into the ‘marmite’ category, which is weird, because pretty much everyone would say yes to Caribbean Holidays in the real world.