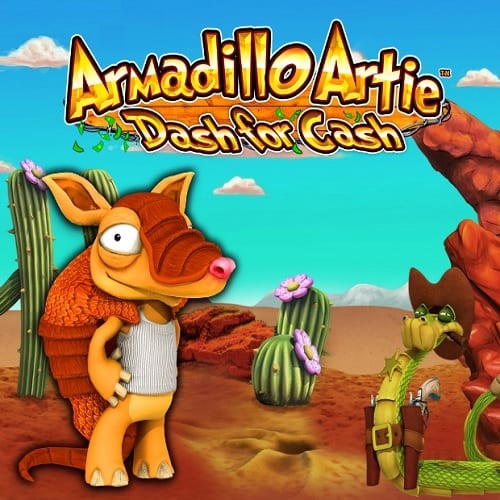 The majority of us have fallen into the trap of taking ourselves too seriously before, whether professionally or personally. That kind of mentality can often threaten to drift into our social time, too, to the point where we feel like every single slot game needs to give us the same kind of thrill and drama as a Hollywood blockbuster. In reality, it can be healthy to test out slots that go in a different direction - and Novomatic’s Armadillo Artie certainly falls into that category. In this underdog adventure, you’ll find yourself laughing and questioning your own sanity in equal measure as you attempt to understand and dig through the weird and wonderful world of our new best friend Artie the Armadillo. 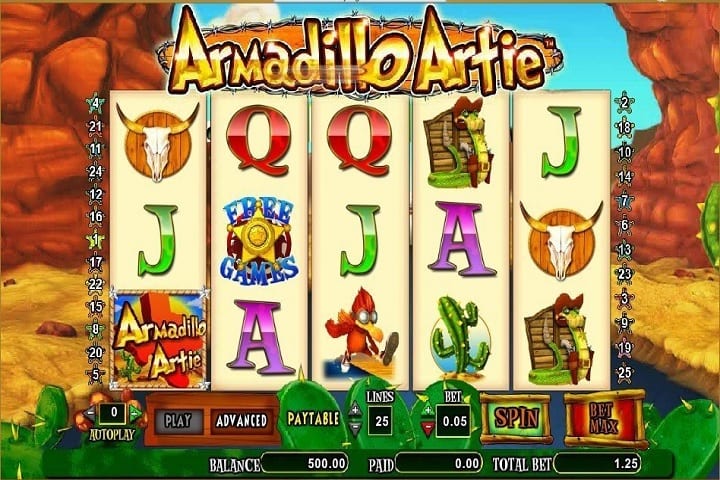 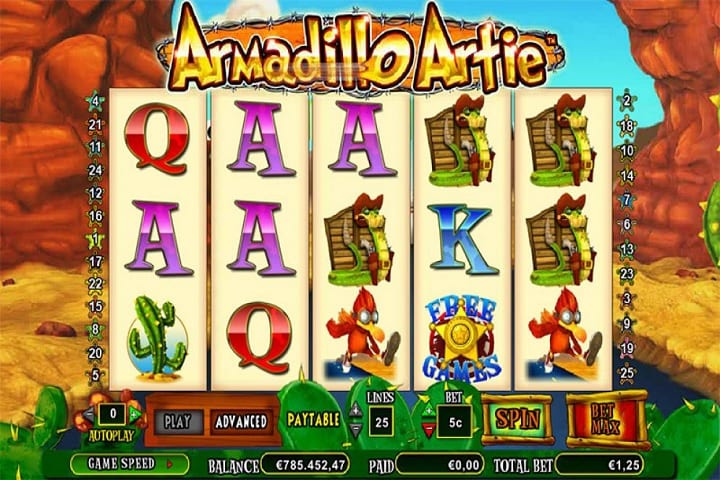 We head to what appears to be the desert region of Texas to meet some crazy critters that are bound to light up our day. Alongside his collection of friends, Artie is here to brighten our day and take us on a journey that, if all goes well, will end with the kind of payout that will have us all doing backflips.

There isn’t all too much time for a settling in period, because before we know it, we’ve been thrust into the spotlight and into a slot that is relentless in its pursuit of glory.

The format is the now-standard 5×3 reels, and it actually fits in really well. The layout is easy to come to terms with and understand, and for a game that was introduced into our lives many years ago, it’s actually quite smooth.

There are 25 different paylines available, but as we’ll come on to shortly, that’s only the tip of the iceberg for this ‘out there’ creation.

As tends to be the case with quite a few of Novomatic’s software & games, the RTP on this isn’t quite as handsome as you’d like to believe – clocking in at 94.75%. Whenever it drifts below 95% many will start to question the feasibility of the slot as a whole, but with medium volatility, it finds a nice balance between drawing in the beginners and trying to lure in some of the high rollers.

Punters can start off with a solid enough minimum bet of 0.25, but they can really go on to spread their wings and fly with a huge maximum of 250. It won’t come as much of a shock to learn this, then, but under the right set of circumstances, winning up to 400x your initial stake is on the table.

The grid on the lower third of the screen actually accomplishes something that few other slot games do these days: it fits in with the theming and doesn’t result in an eyesore. In terms of the design, it should always come as a compliment to hear that this belongs in some kind of fun cartoon show.

The rock formation in the background is great, the characters are fantastic, and the sound of a banjo going on and on and on may be slightly annoying – but it serves a purpose, and it helps keep the slot game consistent.

With regards to the symbols themselves we do catch a glimpse of the usual customers with J, Q, K and A popping up, before we get onto the good stuff. We have, in order of value, the horned skull, possum, bird, sheriff and gopher, all of whom add their own little nuisances into the mix.

You didn’t think they’d leave out Artie himself, did you?

Armadillo Artie is one of the wild symbols in the game, slotting in nicely alongside the cactus. Alongside the scatters, Novomatic keeps the train rolling with this and the other bonuses on offer with Artie popping up on reel five and the cactus on reel three. When they appear the same row together, a wild game feature called Wild Shapes gives the cactus the opportunity to take the spotlight and turn other symbols into wilds – putting more money in your back pocket in the process.

That’s not all, though. If you find three bonus symbols on reel 2, 3 and 4, you get up to four bonus features that will be selected at random by Artie himself.

Sling Shot gives you three attempts at a sling shot with a random prize being awarded for every decent shot. Snake Shoot Out gives you the option of picking three badges from a possible 12, with each giving you a random amount of up to 20x the bet. Pinball transports you to a pinball table with more random goodies, and Cosmic Bowling is a bowling mini-game where you have three attempts to up your winnings.

If that isn’t worth the price of admission, then nothing is, even with no progressive jackpot.

It may be something of a wily old veteran, but Armadillo Artie has still been able to transition over into the world of mobile slots. Competing with some of the more enhanced games on iOs and Android is the definition of a tall order, especially for a company that Novomatic that didn’t exactly specialise in graphics back in the day, but that isn’t really the point of AA’s impact on mobile.

It’s a quirky game and for those who have been playing it for quite some time, it creates a certain aura of nostalgia that we all need to embrace from time to time.

If you’re looking for pure entertainment value, then you aren’t going to go wrong with a trip to visit Armadillo Artie.

This isn’t going to win Slot of the Year, but it should be recognised forevermore as a cult classic within this genre.