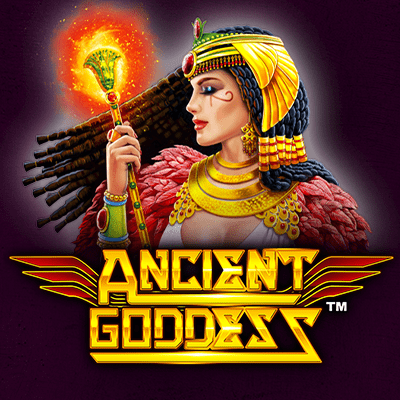 We can’t all command the attention of the masses from the moment we walk into the room - but we can certainly appreciate those from the annals of history that would’ve been capable of turning any and all heads that came in their direction. Paying tribute to the past is one thing, but really focusing our attention on these almost mythical figures can serve up some great results. In one of Novomatic’s more intriguing offerings, we dive back into old Egypt with the temptress that is the Ancient Goddess. We’ve seen games along this line of thinking before, but have they been able to capture the essence of this complex subject matter? 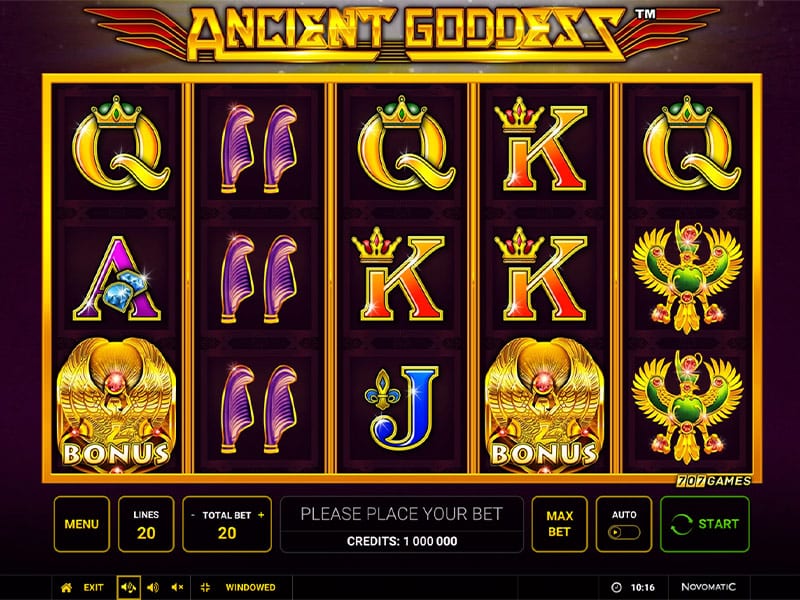 The statisticians amongst us will all be keeping our eye on the figurative prize in the form of the RTP, which comes in at 95.02%. That’ll be dangerously close to the 94% mark for some, but at the end of the day, the actual gameplay can make up for a whole lot of lost time if the provider plays its cards right.

The high rollers out there will be intrigued to know that this is viewed as a medium to high game in terms of volatility, and while that may increase the risk factor, that’s one of the big appeals for a lot of punters when they first get started.

The format is pretty simple with a 5×3 reel, and in actuality, this is one of the few boards that appears to be quite small the reel layout. Even with that being the case, though, it still commands your attention – with the gold and black colour scheme having a big role to play in that.

There are 20 paylines to work through with a very simple objective: find the combinations and, if you’re lucky, unlock the bonus games to really enhance what Ancient Goddess is able to offer you.

One unfortunate fact about this game is that it feels a little bit unfinished based on the design. When you open the door and try to unlock the many possibilities that come with an Ancient Egypt themed game, you really do need to go hard in the paint. It’s all about picking a direction – the bigger and more over the top the better, or the classier the better. AG appears to fall somewhere in the middle, and for a game that is quite clearly eager to stand out, that isn’t a great start with a plain background that still looks like it’s under construction.

Thankfully for players that really enjoy that side of the experience, it is a smooth slot that seems to run through the reels with relative ease. It may not be enough to become a repetitive classic, but it’s something.

10, J, Q, K and A all make an appearance as we’ve come to expect, with the highest paying symbols speaking directly to the theme of the game. We’ve got scarab beetles, a scepter, a hieroglyphic, a commanding bird, a dog and a winged sphinx, with bonuses also being on the table for those who dare to dream.

The game starts off with a slow and easy minimum stake of 0.20, but depending on how far you’re willing to go, you cloud slap as much as 100 on the table in your maximum bet offering. If the momentum carries forward and you’re in for a good day at the office, winning 500x your initial stake is there for the taking.

Novomatic clearly enjoys stacking the deck with what they’ve got on the menu in terms of their bonus features, and as it so often the case in the slot world, there is a scatter available – and this time, it’s a golden-winged goddess, which seems all too fitting.

There are expanding wilds that we’ve all know and love, too, and if you land a goddess wild on the reel it could end up covering three entire rows. As always, it substitutes itself in place of any and all symbols aside from the scatter.

We’ve also got a free spins game to take a look at, with three bonus scatters leading to a reward of 12 free spins. The wilds are still in the mix here, too, because if you land on one, it’ll upgrade one of the symbols to ensure its value goes up to the symbol directly above it in the hierarchy.

Last, but by no means least, we have the gamble game. If you’re able to guess which card is coming next in the sequence provided between red and black, you could double your winnings.

There’s no defined progressive jackpot on offer, but nobody can say that Ancient Goddess leaves you hanging.

It’s not a crime to enjoy your slot gaming on a desktop, because as we all know, the graphics tend to be a bit more defined and far less condensed. Still, we all want the option of having a practical slot that we can play when we’re on the move, and Ancient Goddess falls into that category thanks to Novomatic.

It’s also available on tablets, and with iOs and Android both being compatible, mobile fans should be satisfied enough with the end product.

We can’t pretend like the creativity on display, or lack thereof, is going to be a difference-maker, but maybe that’ll actually make it easier on the eyes on mobile.

Novomatic doesn’t go above and beyond to thrive in this department, but they don’t really need to.

Ancient Goddess walked into an extremely crowded market in regards to the theming, and unfortunately, it just doesn’t stand out from the pack from an originality standpoint. Alas, with it being a game that possesses medium to high volatility, they could be on to something if there continues to be a steady stream of big winners.

High rollers want something grand that fits into what they’re trying to accomplish, and for that reason, the Goddess may still be a contender.