Sometimes, it’s nice to go back to basics in the world of slots. There are some great games out there that focus on a specific topic or genre and really do take it to the next level. Then, on the opposite end of the spectrum, some slots dedicate themselves to the kind of theming that you’re likely to see on the actual slot machines themselves. 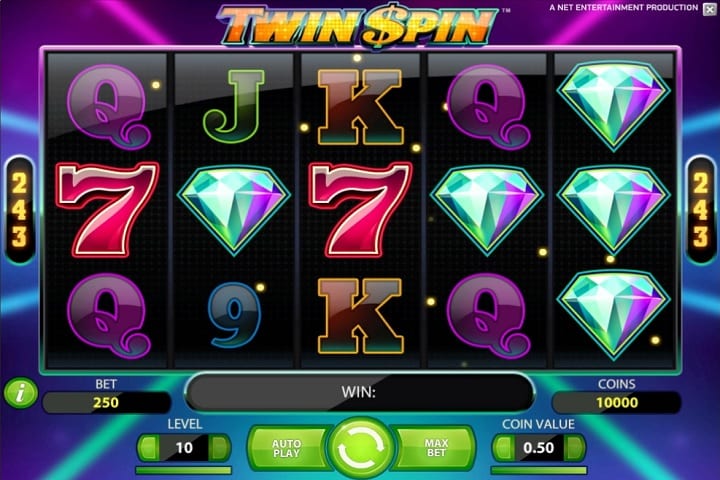 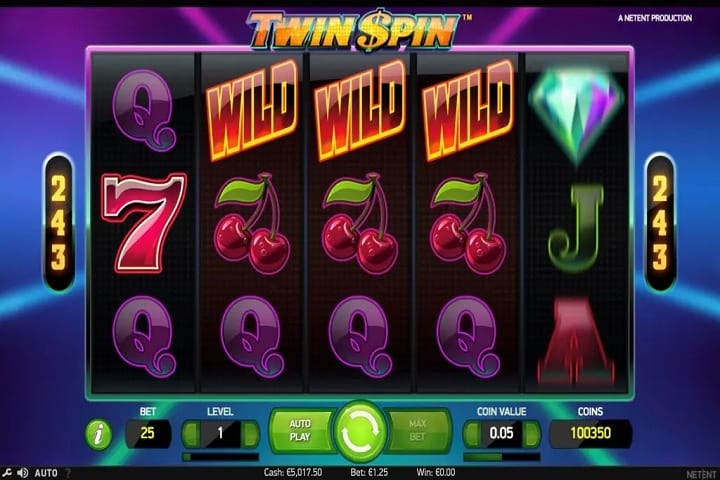 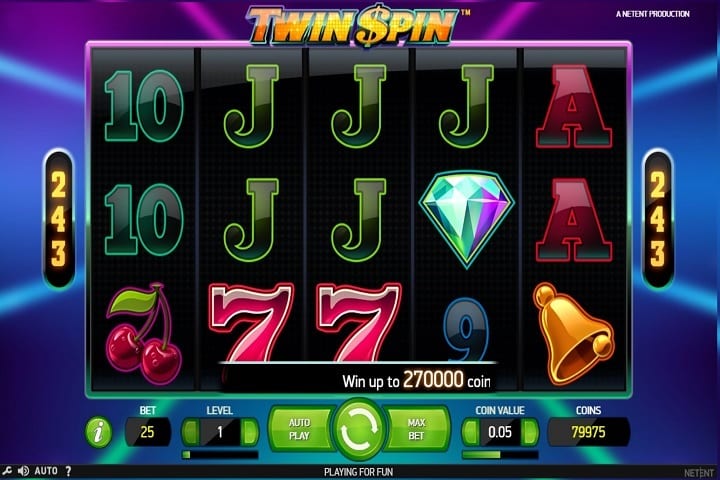 The slot we’re going to be taking a look at today is the definition of an old-school nostalgia trip, and there’s nothing wrong with that. Twin Spin from NetEnt aims to reinvigorate that passion we all once had for the slot industry, reminding us of why online casino sites became so popular in the first place.

Twin Spin is as bright and colourful as you’d expect a slot that looks like it came straight out of Las Vegas to be. There are some games out there that are becoming increasingly complex, but with TS, they quite clearly want to strip that feeling away in favour of something that is easy to follow and fun to play.

They don’t exactly want to rock the boat in terms of the design, which is understandable, sticking with the 5×3 reel system that we tend to see on the majority of boards these days.

If you really want to try and maximise your earnings then this might be the slot for you, because at 243 ways to win, every single spin has potential – and that’s an exciting position to be in.

The value of a solid RTP cannot be understated, even in the present day when players are more likely than ever before to simply boot up a slot due to comfort or familiarity. For Twin Spins, there’s a whole lot to like in regards to the RTP on offer, with the reported figure being 96.60%. That’s above average for a lot of slots, and it’s pretty consistent with the idea that NetEnt can provide you with some decent returns. The volatility is ranked as medium to high, so if you’re in this game for high risk, high reward scenarios, buckle up.

Players don’t exactly have to break the bank to get the gameplay underway, starting off with a minimum stake of 0.25. That can then be extended all the way up to a really nice maximum of 125, so if you’re feeling lucky, let it be known that you can really go for it with the triple-figure bet.

On top of all that, those who strike gold could take home 1,080x their initial stake – so, what are you waiting for?

The first thing that jumps out at us with this slot would probably be the design, mainly because it’s just so mellow. The gameplay itself is really smooth and runs like clockwork, but the soundtrack works in line with the idea that you’re sat at the bar waiting for your table to become available. The colour scheme is a bit jazzier, almost as if we’re up in space, but it is a little bit inconsistent.

The playing cards come out to play on this slot starting off with 9 and going up to A, and as you can probably imagine with a slot as traditional as this one, you also get cherries, bells, bars and the all-important lucky 7s. The symbol with the highest value, however, is the one and only diamond.

You aren’t likely to go too in-depth with features that will blow your socks off on Twin Spin, but that isn’t really the theme here. They want to stick to what they know and throw a few fun bonuses in there for punters to enjoy, knowing that most want a consistent slot that they can rely on.

While there is an autoplay function available throughout the base game, there isn’t a scatter, which may cause a raised eyebrow or two.

The wild function in this slot is still hanging around, though, substituting itself for any and all other symbols in an attempt to bring in the biggest possible winnings – although it only lands on the middle three reels.

The main bonus feature in Twin Spin comes from the Twin Reel feature. On every single spin, two pre-selected reels will feature the exact same symbols on that spin. From there the Twin Reels can actually expand, potentially even turning all five reels into a match – bringing in some winnings that are truly out of this world.

There are no free spin features or any other traditional bonuses in this game, and while that is basic, it’s also quite charming.

Slots such as these are incredibly convenient on the majority of platforms, and that includes mobile gaming. In many ways, despite it having quite an old spirit, Twin Spin really was made for the mobile. It’s compact, it doesn’t take up a whole lot of space, and it doesn’t need to be all too versatile.

You can breeze through a few hours of gameplay in the blink of an eye, and that’s a testament to how well it’s been adapted to the mobile.

Twin Spin does exactly what it says on the tin with a straight to the point, simple slot that is more entertaining than it should be.

The RTP is good, the potential winnings are decent enough, and the symbols are fun.

You have to go into a slot like this with a fair chunk of money in your back pocket, though, because you’ll need to be patient if you’re going to be in it for the long run.

In such uncertain times, it’s great to touch upon the art of a good slot machine reboot – if only to remind us of what it’s like.

This isn’t going to appeal to everyone, but there is more of a niche for slots like this than people realise, and NetEnt has been able to take advantage of that with the undeniably cool Twin Spin.