Everyone has their own idea of what it was like to hang out in the midst of the 1980s culture, and for those of you that were able to live through it, bravo - because we’re pretty jealous. Stereotypes are pretty well noted from that time period from the music to the clothes and beyond, and taking that trip down memory lane can provide us with fun for all ages. 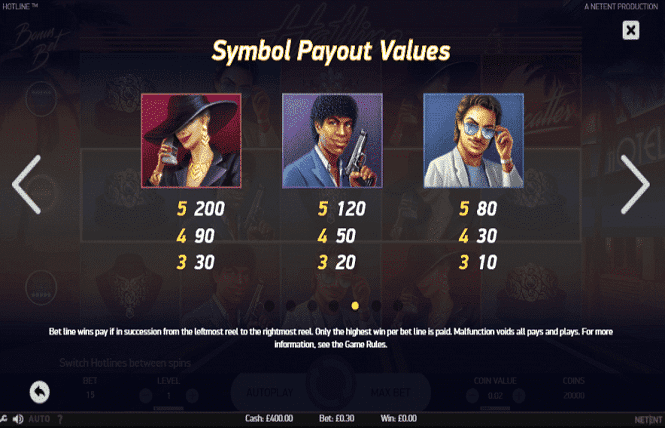 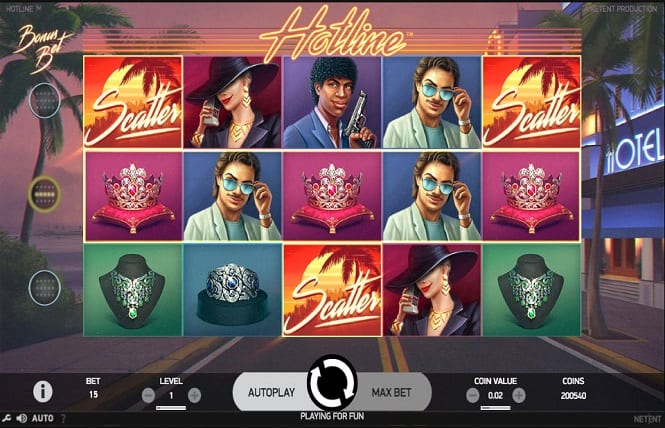 We’ve seen a string of movies and TV shows over the years that have tried to reimagine what it meant to be in and amongst those that were able to thrive in the 80s, and now, we’ve got the slot equivalent.

NetEnt’s Hotline slot is an intriguing slot that takes us in a time machine back to the good old days – but within their incarnation, just how ‘good’ was it?

The popular city located down in the heart of Florida was integral to story that was the 80s, and Hotline attempts to focus in on that with a slot based on a world of crime and excitement.

A phenomenal introduction video sets the scene perfectly, with a jewel thief named Kitty being pursued through the streets in something that legitimately resembles a scene from Miami Vice.

The game focuses on the idea behind the actual Hotlines themselves, with players being able to pick whether or not they want to play with one, two or three of them – which is a feature that we’ll touch on more later in the review.

The board is simple and classy with 5×3 on the reel and row side of things, still giving enough room for the visual details.

It’s unlikely that you’re going to get bored with this stylish offering, too, with 30 paylines being available.

The generous, or not so generous, nature of a slot’s RTP can make or break the entire experience based on just how much the player in question gets hung up on the financial details. This slot, released back in 2018, falls into the first of the two categories at 97.04%, but only if you use all three Hotlines.

That’s a big statement to make in the current era of slot games, as the majority of products tend to fall on the 95% side of things, but if you use two Hotlines, the RTP will drop to 96.70%. If you only play with one, it’ll fall to a still-respectable 96.13%. The Hotline slot also has low-to-medium volatility, which should all but ensure that there are smaller wins on a regular basis.

The minimum to maximum wager also depends on how many Hotlines you’re going to wind up using. If you activate one hotline then it will be 0.15 minimum and 150 maximum, with two Hotlines it’ll be 0.30 minimum and 300 maximum, and then with all three, it’ll be 0.45 to 450.

Plus, if you’re able to strike gold, you could take home up to 2,800x your initial stake.

The adrenaline rush that you get at the very start of playing this slot seems to last all the way through until you finally pack up your bags and move on to something else. It’s as if we’re on a constant car chase through Miami, only being allowed to come up for air when we want to check out the beach. The soundtrack is as thrilling as it is enticing, with all units being dispatched to the scene – in the coolest way possible.

The gorgeous sunset off in the distance is a treat in itself, with this slot more than living up to the hype that the marketing gives it. Oh, and we adore the neon signs.

This slick slot moves through the symbols so quickly that it can often be hard to catch them, but we do manage to see a series of what we can only assume are stolen goods from a blue ring to a green necklace to a pink crown. Then, we get the three main characters: the lady in the hat, the cop with a perm and the smirking man that seems to have an agenda.

You’ll want to watch out for the red sports car which is the wild, and the sunset scatter symbol. The car can actually replace any symbol on the reels aside from the scatter, and it can pop up anywhere.

If you bite the bullet and go with all three Hotlines, there’s a decent chance you could get some expanding wilds and possibly even some re-spins. If a wild symbol lands on an activated Hotline then it will expand to the point where it takes over the entire reel, and from there, the Re-Spin feature is activated with a free re-spin for each expanding wild.

If you can secure three sunset scatter symbols on reels one, three and five, you can get yourself seven free extra spins. Given the fact that you have the expanding wilds in the mix, too, you could have a screen complete with wilds every single time you initiate the free spin – which would be quite the sight as you witness the car racing off into the distance.

The jackpot isn’t progressive, as you can probably tell, but there’s still a great deal of potential here.

A slot as investable as this one needs to be shared with the world as opposed to just desktop users, and for that reason, it is compatible with iOS and Android devices. It really is an online slot that comes across just as well on each platform you use, too, which is a testament to the work that has gone into the project.

Hotline isn’t going to bring in the biggest winnings you’ve ever seen, but boy oh boy are you going to have a good time.

They set the scene with a story that’s easy to follow, there are some unique features with Hotlines, and the design work is so crisp in association with the theming.