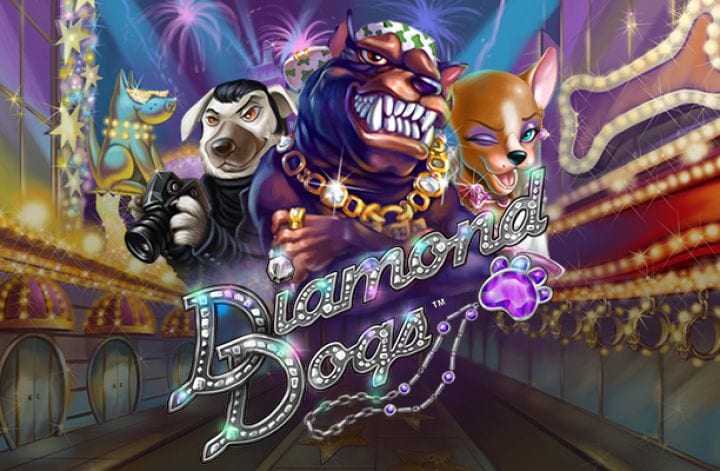 There often seems to be a never-ending debate that rages in regards to what kind of theming works best in the context of slot gaming. If you take a serious approach to it, then you pretty much have to produce the perfect game - or else there’s the danger of ridicule coming your way. On the opposite end of the spectrum, with the comedy side of things, you have to throw as much against the wall as you possibly can, because in the world of slots, the sillier the better. We’d say that NetEnt’s Diamond Dogs falls into the latter of the two categories, blinging up our beloved pooches to the point where they have quite clearly become the stars of the show. 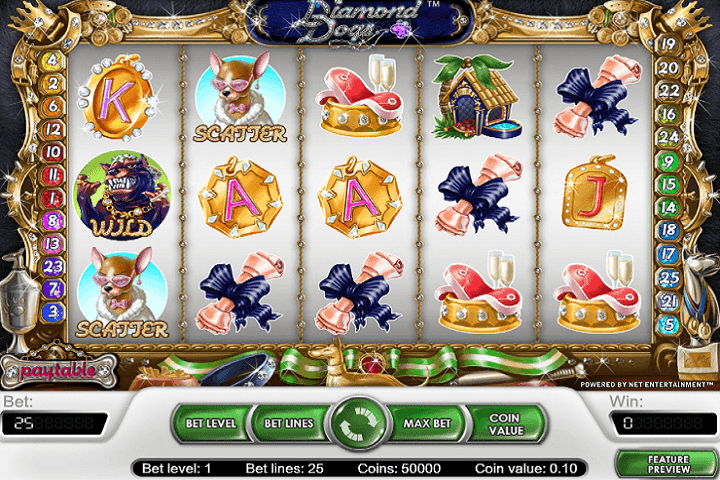 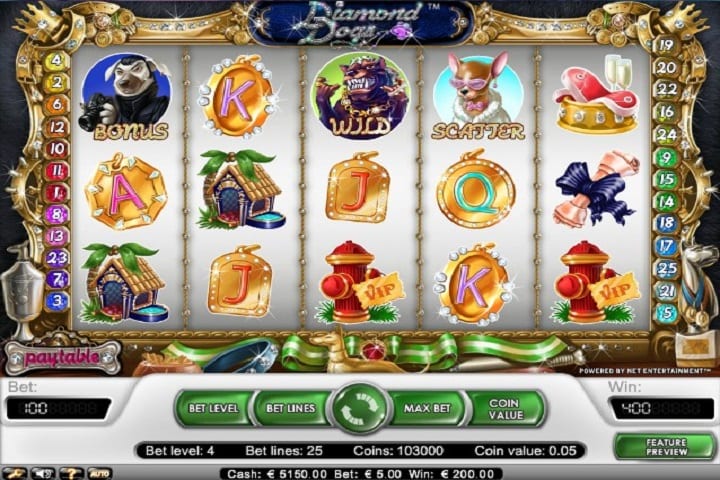 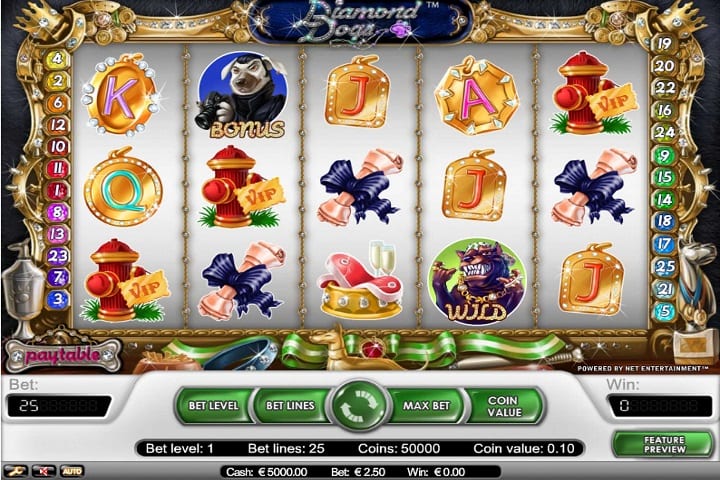 Buckle up, because we’re about to explore the kind of one in a million slot that will get everyone talking.

It’s time to roll up your sleeves and dive headfirst into the glitz and glamour of being a dog on the red carpet – but not just any dog: the cream of the crop. From the shiny accessories to the gold and silver decorations, this slot is the definition of high-end. Whether or not this is your cup of tea, or you think there’s any real point to it, is certainly up for debate – but the entertainment factor is there for all to see.

Diamond Dogs functions under a 5×3 reel system, with the design of the board complimenting the theming really nicely.

There are 25 paylines to work through as portrayed down either side of the board, but this isn’t the kind of game you can judge straight from the word go. You first have to work your way through all of the details before determining whether or not this is a flop.

A slot can live or die based off of the initial RTP assessment, and if that’s the case, we’d say most would think Diamond Dogs is off to an okay start with an RTP of 96.5%. The actual volatility is considered to be quite low, though, which could take some of the thrill out of proceedings depending on what sort of market NetEnt is focusing on with DD.

This may not be a free slot site game but it’s definitely going to be viewed as an affordable one, with a minimum starting point of 0.01 per stake. You can build that up ever so slightly to 0.50, and while that may be on the conservative side, some slots like to take baby steps before reaching the summit, and there’s nothing wrong with that approach.

Plus, it hardly seems fair to complain about a game that could bring in a fixed jackpot of 10,000 if you play your cards right.

It’s all about personal preference, but for us, the way in which the reels move as you play the game isn’t all that appealing to watch. While we understand this slot is nearly seven years old, having been released in November 2013, that doesn’t make up for the fact that the rigid gameplay is incredibly jarring. Also, the annoying dog bark after every single play is enough to drive anyone insane. It might play into the Diamond Dogs brand, but it’s enough to make anyone hit the mute button.

The actual symbols themselves, as well as the Hollywood-esque backdrop, are always nice to look at, even if it does give the whole game a bit of an Uncut Gems feel.

The J, Q, K and A serve as the four lower-value symbols, with DD playing it safe with the playcards featuring in the slot. From that point they move into some themed symbols, starting off with the bow on a bone before moving on to a golden bowl with a delightful looking steak in the middle of it. After that, we’ve got a VIP fire hydrant and a doggy beach house that has just about every luxury a dog could hope to possess.

You can’t have a slot based on living the high life and then not have some fun bonus features – and DD doesn’t disappoint. The wild symbol is a rather striking looking boxer with a big old smile and a gold chain that would make anyone jealous. This dog substitutes itself for any other symbol aside from the scatters, increasing your likelihood of getting some winning paylines. The scatter, on the other hand, is a Chihuahua with a dashing white coat. This helps the punter to activate the free spins, which is when the dog’s sunglasses come off in order to reveal her gorgeous eyes. If you manage to secure three or more on the reels, you’ll be entitled to 10 free spins as well as a combo prize. Every win that you secure during this round will then be tripled as part of a 3x multiplier, which is difficult to really complain about.

The best bonus, though, is the Red Carpet Photo Shoot bonus game. This feature is unlocked when you land three or more bonus symbols of a paparazzi dog with a camera from left to right. Twelve dog celebs are put in front of you posing on the red carpet, in front of a theatre that is fit for kings and queens. You click the camera on any chosen celebrity, with a picture then popping up to inform you how much you’ve won for choosing that photo. You can keep that same energy going until you land on a muddy pawprint, bringing the adventure to an end.

There are no restrictions on your ability to play this slot game: just load up your mobile, whether it be iOs or Android, and you’re off to the races.

Some would say it’s even a bit smoother on the mobile than on the desktop, but the important thing is that it’s compatible.

Funny? Yes. A great slot? It’s close, but we’re not so sure.

The novelty of Diamond Dogs is great, but it’s easy for that to wear off quite quickly if you’re a high roller that wants to dig deep and really become engrossed in the experience. A decent RTP may bring in some dog lovers to start off with, but the power behind that bark dies down pretty quickly.