From new to old, it’s time to take a leap of faith into the past for an old school classic: Demolition Squad. This NetEnt original first hit our screens in April 2012, with many believing that it’s become something of a cult classic across the last eight years. The glitz and the glamour of the modern slots will always take priority for a large portion of players these days, but if you want to revert back to simpler times, DS should be right up your street. It’s almost certainly going to take us on a bit of a rollercoaster throughout the review, but as is the case with the game itself, that’s part of the fun. 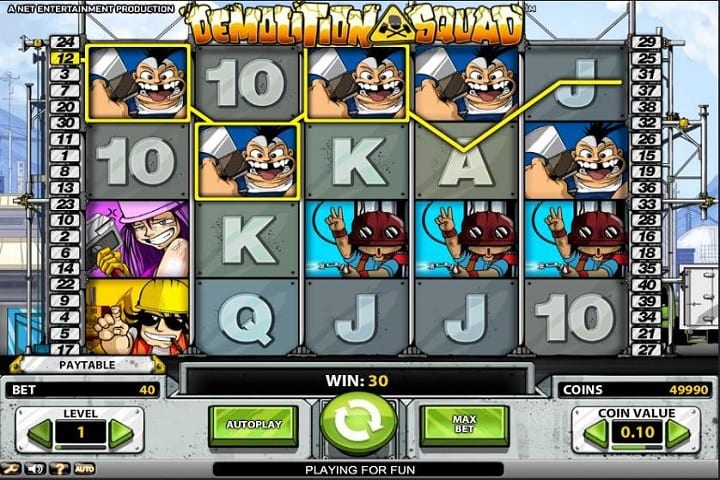 Some would argue that the older the game, the more generous the process gets – and a respectable RTP of 97.1% seems to play right into the hands of that theory. With medium volatility, perhaps even verging on high for some, this is definitely the kind of game that’s going to have a widespread appeal from beginners all the way through to the high rollers. Whether or not it has what it takes to be a durable offering, though, is another matter.

It’s out with the new and in with the old for many aspects of Demolition Squad, and that rings true with the 5×4 reel layout. It leaves enough room for NetEnt to add some creativity into the mix in the background, and it doesn’t look too stretched – regardless of the platform you’re playing on.

There are 40 play lines on DS, which makes sense in association with the lower values that we tend to see on NetEnt productions. It seems simplistic, but that strategy often makes for the most successful slot games.

In direct contrast to some games that have clearly had more care and attention, the lower tier of the screen featuring the “Auto Play” and “Max Bet” symbols actually fits really well into the theming. That isn’t at the forefront of the priority list for most slot fans, but it’s something.

While the game itself threatens to be a bit quiet for a slot titled Demolition Squad, the visuals are pretty solid – and the sound effects grow and improve as the gameplay goes on. There’s definitely a construction site feel to proceedings, and every member of the supposed “squad” does make you feel more than a little bit on edge. In truth, these are the sort of illustrations we’d expect to see on a Cartoon Network series, and that’s not the worst outcome. Even with the “Auto Play”, when you’re sitting back and watching it all unfold, you find yourself searching out some of the game’s liveliest personalities. That’s an achievement in itself.

It’s a pretty smooth game to operate, too, and despite seemingly being restricted in how entertaining the characters could be, they’ve made it quite quirky.

10, J, Q, K and A are back to play from the card deck, looking like solid metal plates to keep the trend going strong. Outside of the status quo we’ve got the demo squad’s main characters: the white robot, yellow helmet guy, the green glow guy (who has a splendid jackhammer), a purple woman, a peace protest kid, and mohawk man.

This is a high limit slot game with a minimum stake of 0.40, but that does run all the way up to 200 for the maximum stake. There’s the possibility of winning upwards of 120,000 coins if you play your cards right, which is enough to make even the most cynical of player’s ears perk up.

The Demolition Wild is on hand to try and make your dreams come true, and also to introduce a bit of anarchy into the mix. If you land two DW symbols on the same row, the symbols on the reels between them will also be transformed into wilds. There’s a regular wild, but it only appears on the second, third and fourth reels.

There’s also the free spins mode, with the hazard sign serving as the Scatter symbol. Three scatters will give you 10 free spins, four will give you 20, and five will give you an almighty 50 free spins which come right alongside a 3x multiplier. Slot games have certainly changed across the last decade, but you could make the argument that the older games know how to treat their customers the right way – at least from a financial point of view.

There may not be a progressive jackpot, but at this point, you’re probably more likely to find the golden snitch.

NetEnt clearly wants to push the envelope within the world of mobile slot gaming, and the priority was clearly put on some of the newer releases in that department. Alas, they know how to catch up in the end, with DS proving to be a successful product on the mobile. It can be played through any of the popular casino sites that carry NetEnt’s games, although, for the full experience, the iPad does seem to be a good bet – pun not intended.

Given what they’ve been able to do with a slot from 2012, the sky is surely the limit for the enhancement of mobile slots in the next decade and beyond.

It’s gritty and it’s a bit rough around the edges, but isn’t that how we describe most of our favourite slot games in the modern age? Demolition Squad is straight out of the comic book genre, and where it thrives the most is in its ability to break the mould.

NetEnt likes to tell stories, and with DS, they tell a story that fits in with a financially beneficial game. Sure, most slot games offer up one of the two, but Demolition Squad is unique in its delivery.

It’s certainly a game you could play time and time again, and eight years on from release, it’s as destructive as ever – in a good way.