Taking it back to basics and getting down to the streets can be a weird way of looking at a slot game, especially when you consider the trend of making everything “bigger and better” with every new kid on the block that comes out these days. Of course, Crime Scene is going to do what it says on the tin and you know the sort of theme you’re going to get - but does that take away from the experience? Not in our book. CS comes straight out of NetEnt’s box of tricks, and if there’s one thing that we’ve come to learn about this provider, they like to go above and beyond. Whether or not they’ve hit a home run this time around, though, remains to be seen. 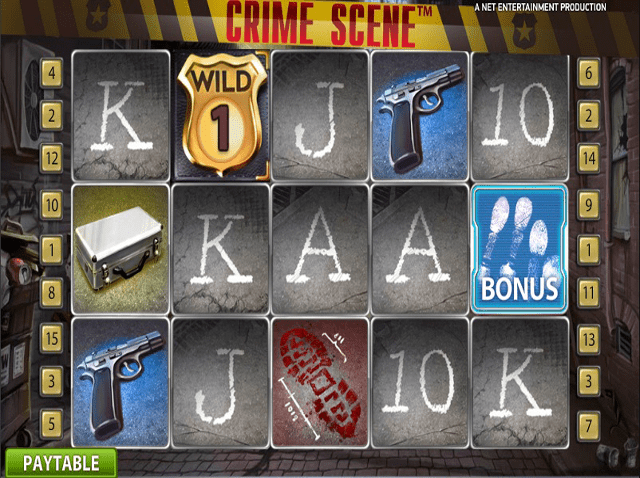 While it may not quite drift into the upper echelons, Crime Scene does come in at a fairly respectable 96.7% in the RTP department, although some punters will consider that to be mediocre above all else. You aren’t likely to find many who would call it a particularly volatile game in that sense, either, but again, it all depends on the sort of style you’re looking to play.

Making a strong first impression is important, but this is where the divide between players emerges. Some look at the stats, whereas some want to have a feel for it themselves.

The reel rocks up in a 5×3 style which seems to be the direction NetEnt is going in pretty regularly now, and you can understand why. From a visual perspective, it does seem a bit ‘stretched’ when compared to some of the provider’s alternatives, which could easily put a dampener on proceedings.

There are 15 paylines to work your way through on Crime Scene, although as we’ll come on to shortly, the game doesn’t do much in terms of holding your attention. If you’re in the mood to sit with a long form slot and keep pushing through, this may not appeal to you straight away.

The bottom layer of the screen features all the usual suspects of “Auto Play” and “Max Bet” as well as a feature preview, and while that’s all well and good, the aesthetic doesn’t really fit into the theming that they’re trying to go for. The backdrop gives us the view of a stereotypically dirty alleyway in some random city, but you can’t exactly see too much of it. The soundtrack they’ve decided to run gives off the impression of an air raid siren more so than anything else, and given how varied the volume can be, we wouldn’t recommend you play this with earphones in.

There’s a brief shot of the backdrop that includes a body bag with police tape running through it, but it just feels a bit too lazy for our liking.

The standard customers of A, J, Q, 10 and K are present, identified as if they were chalk on the ground – which, again, could’ve been done by a 10-year-old.

We get a bit of variation in the symbols with a gun, sunglasses, a silver briefcase and a bloody shoe print, which serve as nice touches, even if the whole thing is a little bit forced.

You can kick start any game with a minimum stake of 0.15 to get the ball rolling, and you can actually pump that all the way up to 150 – with a potential 150x your initial stake, taking the highest possible total to 22,500.

It’s admirable, at a push, but the high rollers are going to scoff at that every day of the week.

The sticky wild presents itself as a police badge and has the potential to be substituted in place of all symbols across the reels – aside from Bonus symbols. It’ll stay that way for a period of five spins, and when you win, there’s a 3x multiplier on offer. Given how tedious the standard spinning can get from time to time, this is a welcome distraction for Crime Scene.

Who doesn't love a good bonus eh? Well the bonuses keep flowing from there, because if you land of three or more bonus symbols, aka the white fingerprints, you’re transported to a forensics lab. The more you bet inside the actual game the higher the rewards in the bonus, and by clicking on the blue folders, you could win coins and even secure a second chance symbol that keeps the train rolling.

Before it all comes to an end we make our way over to a Deal or no Deal type of scenario, with potential prizes including a 2x multiplier to extra coins.

There are definitely improvements to be made on CS, but the bonus features really do help to save it – although it does have to be said that there isn’t a set or progressive jackpot.

Having been created and released back in 2013, this could come across as a pensioner in comparison to some of the fresh face slots on new slot sites out there. Once upon a time it wasn’t actually available on a mobile casino, but as NetEnt has continued to change within the modern era, they’ve made sure the majority of their products can be played on both iOs and Android – including Crime Scene.

It’d be wrong to assume that it’s equally as smooth or consistent as the desktop version, but then again, it may be easier to handle with the volume aspect and overall frequency levels.

But when push comes to shove, all most punters are interested in is whether or not they can play it on the go.

There’s definitely an appeal to be had from the initial name Crime Scene, and there are actually quite a few interesting aspects of the game itself, especially within the context of the bonus games.

However, we do feel as if this is one of NetEnt’s weaker efforts across the last decade. The theming is inconsistent, it’s not a slot that features particularly high volatility, and it’s quite easy to get bored within a short space of time after playing it.

The idea was nice, but unfortunately, it’s off to the cell for this troublemaker.