Logic dictates that it’s important to stand out amongst the pack in an industry as competitive as slot gaming, and NetEnt’s Bollywood Story takes that premise and knocks it clean out of the park. This cultural and spiritual revelation takes the stereotype of drama and stakes in slots and puts an entirely different spin on it - and that can be said even before you start the process of actually playing. It’s important to explore different ideologies, and in incorporating that genre into a slot like this, it opens the eyes of the masses to something that may have previously been beyond their comprehension. Whatever the case may be with the gameplay itself, Bollywood Story is already off to a fun start. 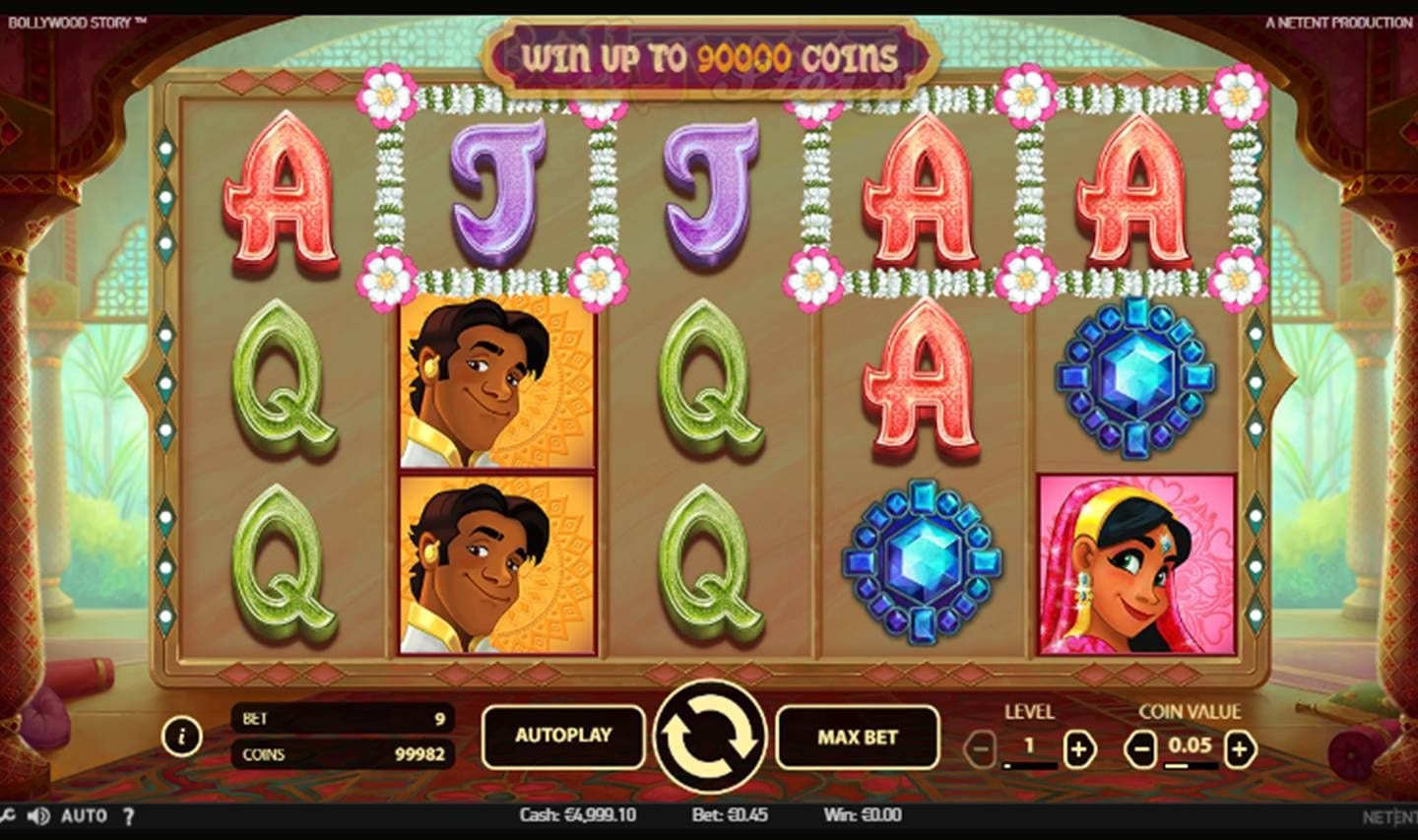 Injecting some life into a fresh product should be at the forefront of every provider’s priority list, and that is clearly one of the primary mantras of NetEnt. They’ve done it before, and they did it again when this slot hit the mainstream back in June 2018.

BS comes in with an RTP of around 96.1%, which can be described as fairly standard or perhaps even unremarkable amongst its peers. It doesn’t go above and beyond to increase or enhance the risk factor to an unreachable point, and in terms of the volatility, it’s probably medium at best.

The 5×3 reel setup may seem fairly standard, but it really works within the storyline of the game. A young couple want to be together and are desperately in love, but the actions of the evil stepmother and evil elderly man get in the way as you attempt to find the adjacent combinations to receive the winnings you desire.

The 9 paylines make it a simple and to the point kind of slot, and in the current landscape of the gaming world, sometimes we need something like that. It’s a relatable tale that goes on to uncover some intriguing hidden treasures, with the game finding itself playing the role of a true fairytale. As is always the case in that universe, though, there are twist and turns along the way.

The “Autoplay” button, the “Max Bet”, the “Level” and “Coin Value” – everything is just so clean. The wooden colour scheme fits well with the rest of the panel, from the detailing around the outskirts to the actual symbols in the middle. In conjunction with the love story, we also have a traditional Bollywood soundtrack that serves as the glue which holds the whole production together from start to finish.

There’s something to be said for a thought-provoking slot and this fits the bill ten times over, and at points, it genuinely feels like we’re in the cinema preparing to watch the latest blockbuster.

In terms of the symbols themselves we see 10, A, J, Q and K all make an appearance as well as the primary characters: the young man, the young woman, the evil stepmother and the evil elderly man. It may seem like an uphill climb to consider this an epic tale, but in reality, this is exactly what it needs to be and serves the purpose of bringing us into this new adventure.

The high rollers may not come out in their numbers to greet Bollywood Story with a low of 0.09 and a high of 90 when putting down your stakes, but it’s a solid enough range that will draw in punters who are hoping to make some quick cash.

The Bollywood Story Logo is what you really want to sink your teeth into because if you hit that, you can take your maximum earnings from 750x of your original stake all the way up to 1000x – which sounds like something worth fighting for.

Visually, the best bonus feature that comes alongside BS is the floating wilds that run consistently alongside the man game, centring around 2-4 of the symbols on the reel at any given time. They can outright replace all symbols outside of the famous scattered sapphires, which take the game to another level.

They have the potential to trigger a Bollywood Free Spins bonus, with 3-5 of the sapphires bringing you a different number of free spins: three will give you 10, four will give you 20, and five will you guessed it, give you 30. The 3-6 floating wild flower garlands could give you some major payouts, and if you’re ever feeling a bit lazy, you can stick on the auto-play function which will lead you through up to 1,000 games if you feel the need to use it.

There’s no progressive jackpot on Bollywood Story which won’t be great news for some who want to find a slot game and stick with it, and for those individuals, they have to weigh up what else it is that they really want from the experience.

Outside of the standard desktop function you can, in fact, play through Bollywood Story on your mobile, too. It’s compatible with all the big players, and you could even say that it improves upon the desktop version – depending on whether or not you enjoy your slots being more condensed.

It’s smooth, it’s loud and it’s proud, and it’s a no brainer to add to your add collection – but whether or not you can sustain the game for longer than 10-15 minutes remains to be seen.

Bollywood Story is a slot that leads us to believe NetEnt is the sort of provider that really cares about the replayability of their games. There’s a charming consideration behind the story that always leaves us wanting more, and there are reasons to believe that the simplicity within the message is what furthers the quality of the gameplay.

High rollers aren’t going to flock to this slot and ride it through until the depths of the night, but they aren’t the only players out there on the market. In its idea and the eventual delivery, this feels like a slam dunk.