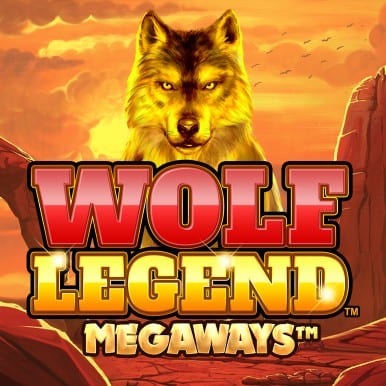 There are some pretty terrifying animals out there in the world that many of us have to face at one point or another, but many of them also have a certain regal elegance to them. In this odd sub-section of the kingdom we’ve created, one of the most prominent figures is none other than the wolf. 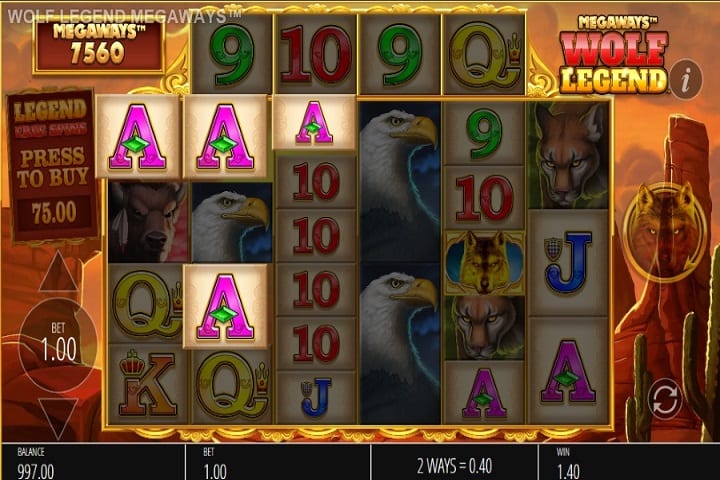 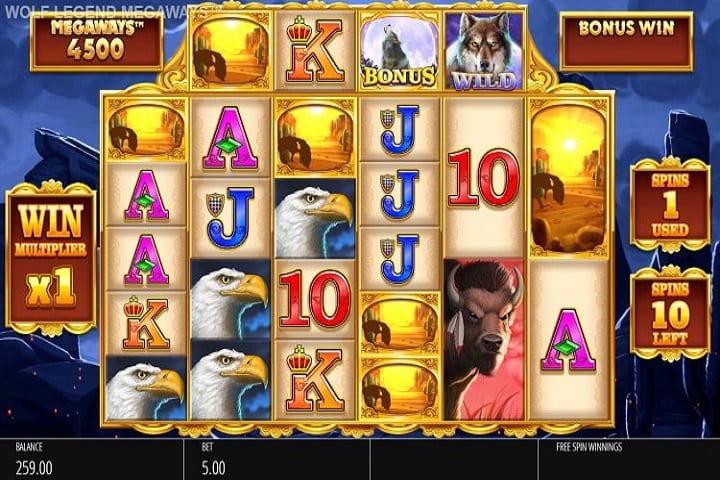 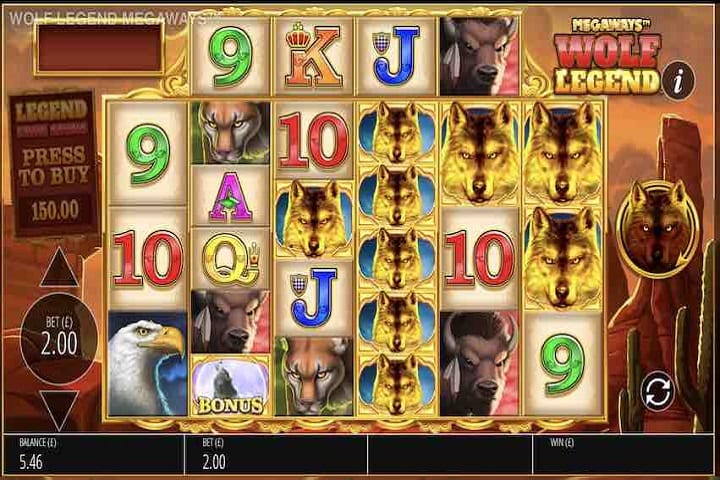 Even just a quick glance at a wolfpack is enough to let you know that these aren’t the kind of beasts to be messed with.

Today, we’re going to be taking a look at a slot that attempts to accomplish something we’d argue is vitally important in this age – doing them justice.

Megaways’ Wolf Legend has the potential to be something special but fulfilling that potential has often been a slippery slope for the provider.

We find ourselves in the depths of the American West as we try to navigate our way through the mounds and the heat of the desert. Whether it’s the light of day or the sinking mystery of the night, we really enjoy the theming behind this slot. It’s easy on the eye, it stays true to the destination, and it ensures we never forget the power and respect that these animals demand.

There are six reels spread across the entire screen, although the middle four reels have an extra slot available at the top of the board. If nothing else, this should ensure that you get as much out of the game as you possibly can.

That much soon becomes obvious when you learn that there are up to 117,649 ways to win.

Some go out of their way to track down the slots return to player (RTP) percentage and others avoid it like the plague, but the impact that it can have on a player simply cannot be denied. It could be the catalyst behind someone deciding that WL is a masterpiece or that it’s a complete waste of time – you just never know.

The final figure for Wolf Legend comes in at 96.21%, and you’d have to imagine they’d be fairly pleased with that outcome. It’s above the industry average, it ensures that you should get a handsome amount back on what you put down, and most importantly, it works hand in hand with the fact that it has high volatility.

Those who are interested in getting involved with Wolf Legend don’t have to remortgage the house to kickstart their journey, either, because the minimum stake is only 0.10. Those with smaller budgets will be happy to learn that the maximum stake is 10 (although some sources report it to be 100), but the real headline of the day stems from the maximum winnings of 50,000x your initial stake.

The one thing that we draw from this slot, above anything else, is strength. That may sound like quite a sweeping generalisation but it’s true. Everything about the design and animation is so crisp, but above all else, it’s just professional. That also seeps into the soundtrack which builds up the tension brilliantly, and while the board does come across as the ‘Wild West’ stereotype, Megaways seems to get away with it.

The playing cards make an appearance as they always seem to do with everything from the ace all the way down to 9 popping up. We then move on to the sensationally-designed themed symbols: an eagle, a bison, a mountain lion and the golden wolf – with the latter obviously being the most lucrative of them all.

Bonus features tend to be put under great scrutiny by lovers of the slot industry, and we don’t really think it’s hard to understand why. Everyone wants to find great intrigue in the base game and they will be hooked in by the initial look of the slot, but they’ll stick around if they’re given enough reasons to keep playing.

The wild wolf symbol appears in the extra positions above the middle reels and it is capable of substituting itself for all other symbols aside from the scatter – which takes the form of the howling wolf. There is also the frame mystery symbol that can show up on any of the symbols, with all mystery symbols turning into the same randomly chosen symbol to increase the likelihood of you picking up some big wins.

The Cascading Symbols feature is present as we’re all used to seeing in Megaways, with all winning symbols causing a chain reaction with the winning symbols being removed for new ones – ensuring that you could have knock-on wins for quite a while.

The howling wolf scatter could trigger the Golden Streak feature if you get three or more of them. The scatters hold in view as the reel continues to spin and if more scatters pop up, they are also held in position. You do this with a certain amount of ‘lives’ and continue until you run out or the reels are full of scatters.

The more scatters = the more free spins, and once you’re in the Free Spins feature, you will be given an Unlimited Multiplier. Every single cascade will increase the multiplier by 1x, and if you get 3 or 4 scatters, you’ll be rewarded with 5 or potentially even 10 free spins.

Oh, and a gamble feature gives you the chance to win more lives, which should distract you from the fact that there isn’t a progressive jackpot – even though that doesn’t really matter.

Those of you out there who don’t fancy going with the old school desktop version are in luck because Wolf Legend is compatible with any and all mobile devices. Plus, we’d argue it’s even smoother on your phone than on your laptop.

Wolf Legend is a slot full of potential both in terms of earnings and entertainment value. Megaways knows how to produce a slot that has real heart to it when they want to, and that’s precisely what we believe they have done here.

The RTP is good, the gameplay is good, and that’s all you can really ask for.