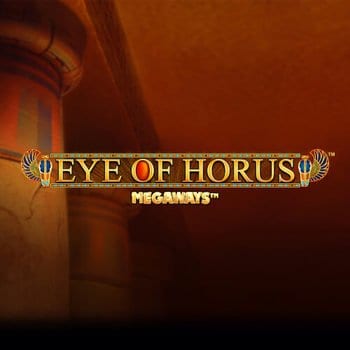 One of the most commonly seen slot themes out there is based around Ancient history, and this game offers exactly that. Specifically, this theme is based around Ancient Egypt, something we have seen a lot of before. There are many aspects of this game that point back there, including the symbols on offer, so this is perfect for those who enjoy this period and games about it. 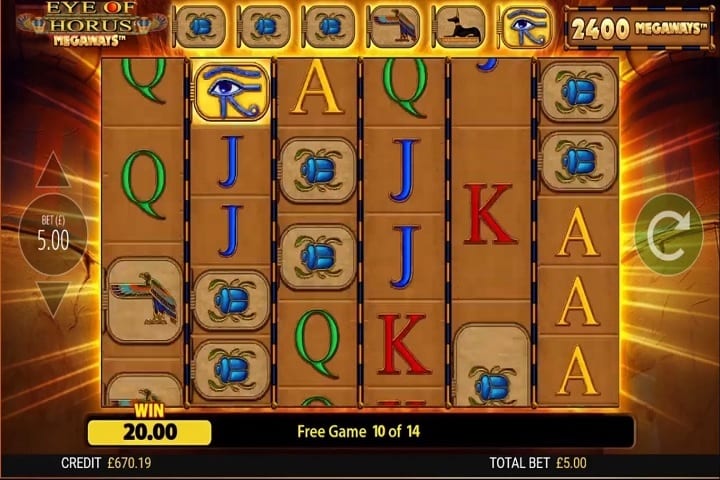 To find out more, you can check out our in-depth Eye of Horus Megaways review below.

If you take a look at the Megaways titles on offer, you will see that many different developers have created them. However, one that stands out as creating a lot is Blueprint Gaming and they are the company behind this one.

They have vast experience with Megaways, they understand how it works and use their knowledge to make great games, combining with Big Time Gaming to use their Megaways license.

You are in good hands here, and the game is a standard version of Megaways. This means 117,649 total ways to win on the reels, which are the standard 6×7 size.

The design of the game is very good too. You get the feeling you are inside an Egyptian pyramid, with a dark setting and in front of this on the reels, you have a large number of symbols which focus on Egypt.

Older slot players who have played a lot of Blueprint Gaming titles may remember the standard version of Eye of Horus, which was released a few years ago. They created this with their sister company at the time, Merkur Games, and it was very popular in the German market.

Now we have a new version, using Megaways to give the game a boost and the outcome of that is a very solid slot game with a great theme and many fantastic elements to enjoy.

An area in which this slot lets itself down a little is with the RTP on offer. This is lower than average, unfortunately, though part of that is due to the game only having medium volatility. This means smaller wins will come on a regular basis, but there will be fewer big wins.

The RTP is 95.49%, something that we would like to see a little bigger. For many people though, the RTP is not a game-breaker, providing the theme is good and enjoyable, many don’t mind a slightly lower RTP alongside that.

When it comes to symbols on this game, this is where we see the Egyptian theme shining through on this slot. On top of that, they have the backdrop showing the inside of an Egyptian pyramid behind them, which makes them look even better.

Card symbols make up the smallest wins on this slot, these are the only ones that do not represent the theme in any way, and in many respects, it is better to look elsewhere to try and build bigger winning lines using the higher paying symbols.

Here you can look out for things such as donkeys, birds, small animals and many other things related to Egypt. These all look as though they have been drawn on the side of the pyramid-like we are used to seeing with Egyptian writing.

Horus, who the game is named after, acts as the wild symbol in this game and there is a special feature to look out for. Wilds are great because they can change into any other symbol except for the scatter, and this will help you create big winning lines on the reels.

While playing the base game, expanding wilds are in play and when you get these, the wild symbol expands to cover an entire reel, greatly increasing your chances of a win so look out for this.

The final symbol to mention is the scatter, something that you will certainly want to land on because this is how you get into the free spins bonus game that we are going to talk about shortly. This is golden doors, and you can view them as the doors opening to give you a shot at the free spins bonus.

Get three or more of these and you will find yourself in the bonus game.

As mentioned, the scatters get you here and this is a simple game to follow, even for those who are experiencing Megaways for the first time. Three golden doors will give you 12 free spins and the game begins by several high paying symbols appearing on the top row.

Full wilds are in operation here, so look out for Horus as this symbol will cover an entire reel for you. A beam of light will then appear, which takes out the lower paying symbols and transforms them into higher-paying ones, giving you more chance of winning big.

This game is one that can keep continuing for a while too, as every time Horus appears you will receive either 1, 3 or 5 free spins, which are added to your remaining total.

This feature is all designed to give you a chance to win using the bigger symbols, and a great bonus game to try and win on.

If you would like to play Eye of Horus then the good news is that you can play this game on any device. Use your smartphone, a tablet or your desktop computer to play on this game, it will look great on any of those devices, even the smaller screens.

If a game wants to be popular it must have mobile compatibility and Eye of Horus has exactly that.

There is a lot to like about Eye of Horus, this game has a great bonus feature that you can aim for and with expanding wilds, there is always the chance of a big win around the corner.

A smaller than normal RTP is on offer, but there is no doubt this is a very fun game to play and users are going to be able to relax and surround themselves with Ancient Egypt when they log on here.

If this period and games focusing on it appeal to you then make sure you give Eye of Horus Megaways a try.