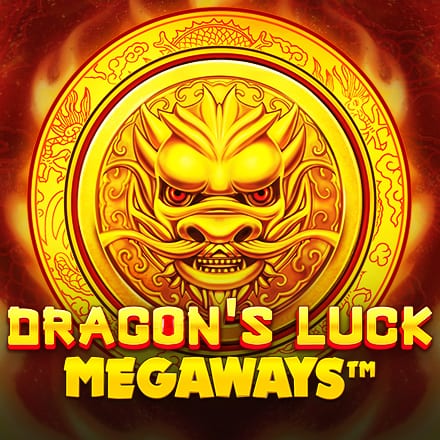 An oriental theme with dragons along the way is what is on offer for players who give Dragon’s Luck a try. Players are greeted with a very simple and easy to follow gaming board when they load up this game, something that makes it perfect for those looking to experience Megaways for the first time.  There is a real fun feel on offer here, those looking to sit down and relax with a slot game are going to like the feel they get from this one. 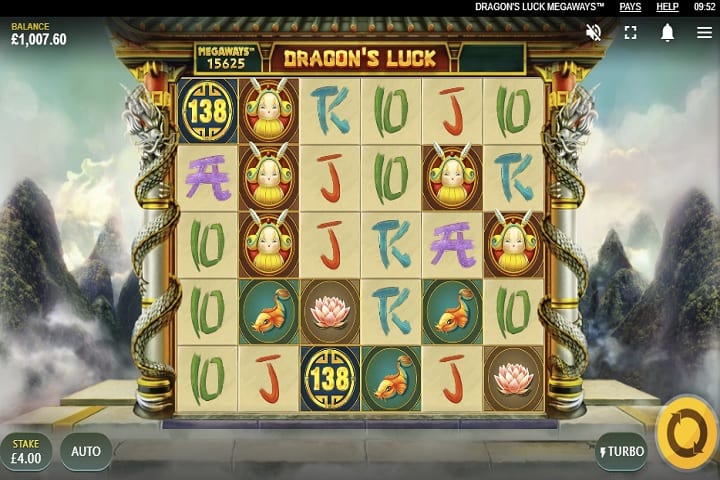 More on that and everything else you need to know about this slot can be found in our full review below.

Dragon’s Luck Megaways is brought to us by Red Tiger Gaming, a company who have experience in creating the Megaways style of games that we all know and love. They have teamed up with Big Time Gaming here to use their Megaways license to create this title.

Anyone that has played Megaways before will know and understand the gaming layout, this is the simple and commonly used layout for this type of game, with 6×7 reels for you to play. These give a total of 117,649 ways to win when they are stretched out to the maximum.

Players betting can go from the minimum which is 0.20 up to the maximum bet on this slot which is 10. The covers most people, but the maximum on this slot is lower than what you will find on others, and that may affect some of the larger staking punters out there.

The theme of the game is broad, and won’t specifically stop people from playing this game. Think oriental and dragons and you will get a feel for what this game looks like.

The RTP for this game is one that is average when compared to other slot games, both standard games and Megaways. It is 95.69%, so this is by no means a bad deal, but one that is not as good as what you could get elsewhere.

So as we have just said, there is no wild symbol and there is also no scatter symbol on the machine to get onto the bonus game. This is because there isn’t one, which makes this game far simpler than many others on the market, which will appeal to newcomers but it does take some of the fun away for more experienced players.

There are a couple of features that we will speak about shortly to add excitement to this game, and they try to replace the lack of a bonus game.

Regular symbols on this slot are classic card symbols and they run from 9 to A. These give out the smallest wins on the slot, but a combination of them can still give you a win you are happy with if you get a long line of five or six.

The higher paying symbols are all related to China and what is traditionally seen as being lucky in the region, so expect things such as fish and people on the reels.

Cascading reels are in operation to add more fun when you land a winning line the slot will make these symbols explode and be replaced by new symbols. This could give you another win, so you can win multiple times from just one spin here.

Then we have the mystery symbol, something that is hidden when landing on the reels but will be revealed later. Try and get as many as possible of these, as when revealed they will always be the same and can link together for long winning lines.

There is no proper bonus game to speak of here, but there is a feature known as the Mega Coin feature. This puts mega coin symbols on your reels and they can take over up to three reels to cover a large surface area.

After landing, this splits into many different mystery symbols, and as we have already mentioned these will break down into the same symbols. So, if you get a 3×3 Mega Coin then you will have nine of the same symbols to build your winning lines around.

It is a little disappointing for more experienced players that there is no bonus game here, but new players will appreciate it, allowing them to find their feet without the confusion of playing a mini-game.

Many players are now playing slots via their mobile phone and for that reason, developers have had to change the way that games are made to make them mobile compatible. The Dragon’s Luck Megaways slot is one of these and can be played on a smartphone, on your tablet or loaded up on a desktop computer.

This flexibility means that players can play from anywhere, no one is excluded from trying out this game and it is one that can rise in popularity because of that.

There are many casino games out there which are too complicated for newcomers, but this is certainly not one of them. If anything, this game has been designed with those players in mind.

If you are new to slots completely, or just new to Megaways and you are looking for something exciting but simple to play, then why not try out Dragon’s Luck Megaways. The game lacks a bonus game to play in, but that keeps the focus on the main reels for players.

Cascading symbols, the mystery symbol and Mega Coin make this an exciting game, and if you are looking for something new and you don’t want anything too complicated, we recommend you try this game.