The Wild West has been at the heart of many different concepts and eventual products in the world of slot gaming, and it’s not exactly hard to understand why. This is a genre that appeals to millions across the globe, whether it be due to the high stakes nature of the conflicts or the classy manner in which they uphold some of their long standing traditions. 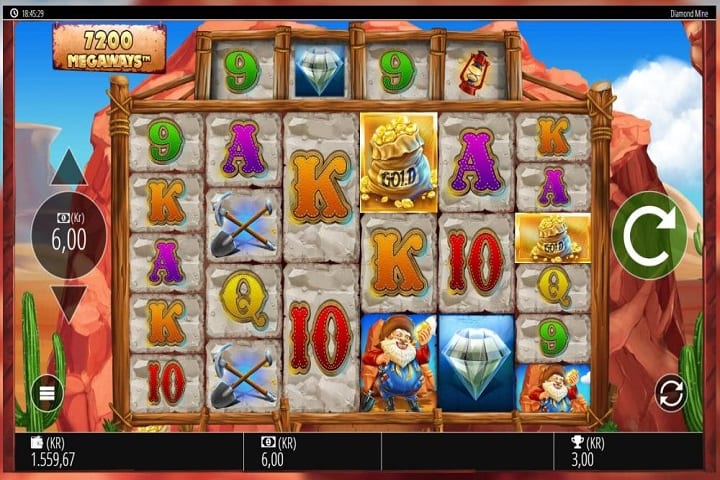 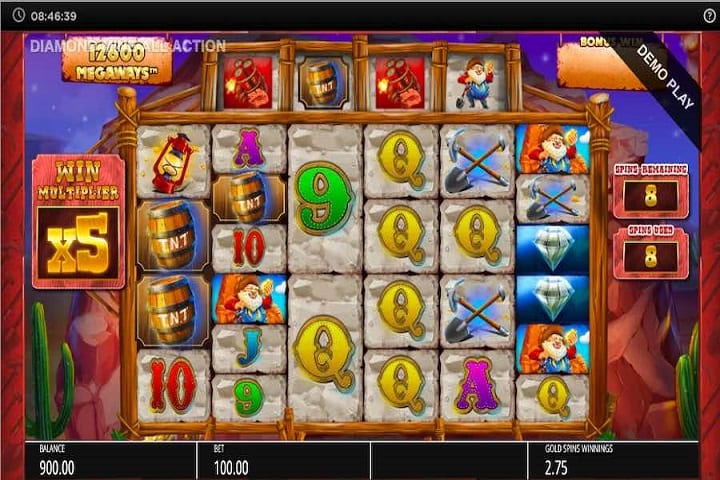 Whatever the case may be, it’s always intriguing to see a provider put their neck out on the line in an attempt to capitalise on this market – and that’s precisely what Megaways has done.

Diamond Mine is a slot released in early 2020, and while it may have preceded the insanity of what this year was going to bring, some would choose to look at it as a beacon of light in the darkness.

In this case, we’ll be the judges of that.

Set across the red rocks of the desert while being flanked by cactus or two, this slot really does go hard in the paint in regards to setting the scene for us. One minute we feel like we’re in an action thriller, and then the next, we’re simply sitting back and basking in the glory of the fictional land we’ve been transported to.

There are six reels to take in across a board that has been really nicely designed, but the middle four reels have an extra slot at the top – ensuring that you need to keep your eyes peeled from the minute you spin until the second you get some results.

The symbols are often able to break up into sub-symbols on the reel, as tends to be the case with Megaways, which means there are a possible 117,649 ways to win. No, that isn’t a typo.

The neverending conversation about the slots return to player (RTP) statistic will likely be raging on for years to come, with some investing a whole lot into it and others not buying into the final figure at all. Nonetheless, we still consider it to be important on some level, with Diamond Mine’s RTP coming in at 96.43%. That’s far enough above the standard industry average to impress some punters, and with medium to high volatility, we wouldn’t be surprised to see some high rollers investing their money in this new slot.

You don’t have to break the bank in order to get started with this game, either, as the minimum stake is a lowly 0.20. However, those who like laying it all on the line will be happy to hear that the maximum stake is a cool 100.

Plus, if you’re lucky, and you dig deep enough into that mine, you could walk away with 10,000x your initial stake.

The game ticks along at a nice pace and there are enough themed elements to keep players occupied as they wait for the results of their spins. Oh, and the soundtrack is a whole lot of fun too, even though it could probably throw some people off – depending on their tolerance for that kind of beat.

The playing cards are on display for this slot in the form of A, K, Q, J, 10 and 9 before we move on to the main ‘characters’ if you will. We’ve got the themed shovel & pick axe, lantern and the prospector, with the latter resembling Stinky Pete from Toy Story 2. There is also the diamond symbol which, given the name of the slot, is obviously the most valuable.

Every single slot needs to have some kind of bonus game or feature because if it doesn’t, it can fall down the ladder of relevance quicker than you can say “boom”.

The bundle of dynamite is the wild symbol in this slot whereas the mystery symbol is the barrel of TNT and the scatter is a delightful bag of gold. All of the TNT symbols will explode and transform into the same randomly chosen symbol as part of the Mystery Symbols feature, but the only one they can’t change into is the scatter.

As has become fairly common with Megaways, a winning combination leads to the Cascading Reels feature being activated. It causes a chain reaction of winning combos until there are no more to be found.

The aforementioned bag of gold can pop up on any of the reels, and if you get four at any point, you will trigger the Free Spins feature. This initially gives you 12 free spins with every extra scatter giving you five more, allowing you to potentially start with 22 free spins.

If you want to gamble the number of free spins you have then you can do so on the dreaded Gamble Wheel, and beyond that, there’s the Unlimited Win Multiplier feature with every winning combination increasing the multiplier by 1x.

The jackpot isn’t progressive, but that really doesn’t make too much of a difference for a slot as diverse as this.

If a slot like this, created in 2020, was to be without any kind of mobile compatibility, it’d be dead and buried before it even had the chance to get off of the ground.

Thankfully that isn’t the case with Diamond Mine, and you can enjoy a smooth and seamless experience regardless of where you are or what you’re doing.

Diamond Mine is the plucky underdog slot that we all strive to play, and when we do, we aren’t left feeling disappointed.

Megaways has been on a decent streak of churning out some enjoyable products, and with the theming to go alongside the potential for large wins, we think DM fits into that category.

There’s not a whole lot that sets it apart from some of its competitors in this section of Western culture, but it’s not about that. It’s about giving players something to get excited about, and we’d argue they’ve given us something to get the pulses racing.

Now hustle up, we’ve got some diamonds to find.