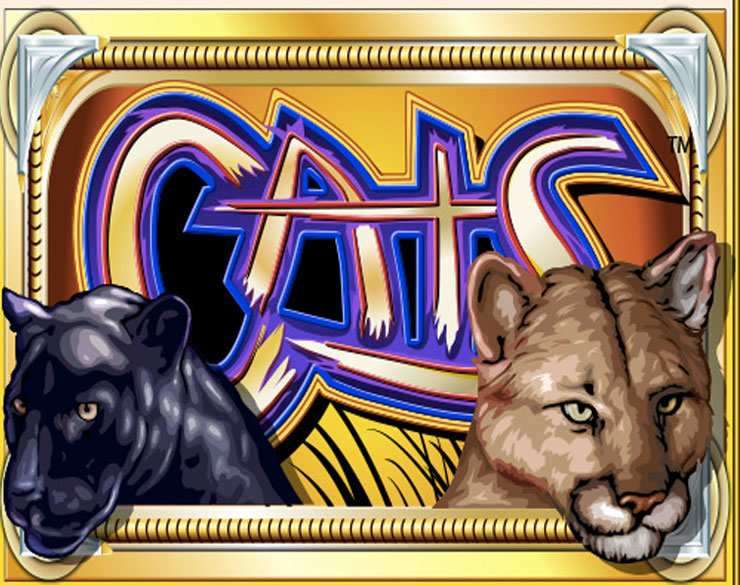 The word may be associated with domesticated animals that hang out around your house, but when you look at the bigger picture, the evolution of cats has ensured that they sit atop the Animal Kingdom - and they have done for years now. In one of IGT’s most notable creations, Cats allows us to explore the remarkable creatures that make up the big cat family. It may not be positioned as the most dramatic or suspenseful slot in the world, but it’s classy, and at one point or another we’ve all come to love what these elegant creatures represent both in the plains of Africa and across the entire globe.

The game appears to take us deep into the African savannah, but instead of looking at a collection of different animals that roam around the fields for days on end, we’re focusing in on the cats. Still, while they may look beautiful from afar or in pictures, these aren’t the kind of beasts that will sit back and allow you to walk all over them. They serve as the benchmark for everything that comes beneath them in the food chain, and this game wants us to recognise that.

The reel comes in at a fairly standard 5×3 format, and that suits the feel of the game quite nicely with every single symbol getting a chance to shine. The game itself is also incredibly smooth, making for a relaxing yet, of course, dangerous experience.

There are 30 paylines that are laid out clearly on either side of the board, and while that may be a bit of an eyesore, it’s always nice to get some clarification.

The RTP for this slot rolls in at 94.93%, landing it in the average category for most slots. IGT tends to fall into that distinction quite a lot with the RTP of their products, but they always aim to make up for it in any and all other departments.

With medium volatility you’re going to need to possess some serious patience if you want to see this slot through to the bitter end. You’ll also need to make sure you’ve got the funds, too, because it’s the kind of slot that is easy to fall into a repetitive pattern with.

The minimum bet line is the definition of generous with a starting point of 0.01, and as you slowly but surely work your way up the ladder, there’s the potential for winnings of up to 10,000 coins for the high rollers amongst you.

Instead of playing into the idea that this is a slot based on intimidation, the whole feel of the game instead goes with a much more positive approach. It feels like a safari above anything else, and the theming is pretty simple. That can be confused for being lazy, but the detail that went into the symbols themselves makes it all worth it. However, if there’s one criticism in regards to the layout, it’d be that it can come across as being too clunky given how much is going on.

A, J, Q and K are the playing card representatives for this slot, with the original symbols being the Cats logo itself, paw prints, panthers, tigers, cheetahs, mountain lions and, obviously, the king of the jungle, the lion.

IGT always has enjoyed focusing the central part of their development attention on the bonus details, and rightly so, as it certainly helps them stand out amongst other developers. The Cats logo is the main attraction in terms of the wild symbol, as it substitutes itself in place of all other reels on the board – except the scatter, also known as the paw print.

The free spin function is activated by getting five or more of the prints on reels 2, 3 and 4, and as we’ll touch on later, they come in singles or doubles. You can secure up to 10 free spins based on how many paw prints you get, and with the bonus round coming to a natural end when you’ve either hit the top prize or you’re out of free spins.

Finally, we have the Splits Symbols feature. As you can tell if you’ve played the game in the past, every single cat on the reel comes in either a single or double – meaning it either has one or two cats in the actual symbol picture. The winning combinations, and eventual payouts, will be determined by how many matching cats come up. It might be subtle, but it’s an effective shift.

There’s no progressive jackpot in play, but everyone can still agree that the potential winnings are pretty substantial.

Cats as a slot may have an old school vibe to it, but IGT are well aware of the fact that it needs to stay current in order to compete. That’s why they ensured that it was compatible for mobile casino play, including for Android and iOs devices. As we’ve already noted, this is a really smooth slot that runs like clockwork – which is always going to translate into success on the mobile, too.

Ironically enough the mobile version doesn’t suffer from the same condensed problems as the desktop equivalent, or at the very least, IGT have been able to hide it quite well.

Run of the mill is probably a bit harsh as a way to describe Cats, but in terms of the theming, we do like that they took something of a risk by mixing up the African themed genre, which as we know, is always at the risk of being oversaturated.

It’s a slot game that requires a fair bit of patience and while plenty of punters will have the intention to keep going in search of a big win, it all comes down to whether or not they feel like it’s worth their time.

The Cats are beautiful and the gameplay is nice and chilled, but whether the excitement factor is enough is the biggest question of all.

For us, we’re still torn.