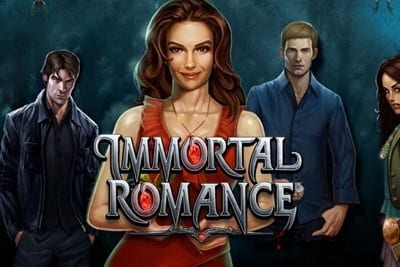 We all want to live forever, but can we all love forever? The idea of love can be a fairly terrifying thing, especially for those of us who have been hurt by it before. As a result of that fear and uncertainty, we’d argue that it’s actually pretty easy to lean into the idea that love and horror can go together hand in hand. After all, that’s half of the reason why Halloween is such an overwhelming success. Today, we’re going to take a look at a slot from Microgaming that takes a deeper dive into this sub-genre: Immortal Romance. It’s a little bit different and it’s a little bit niche, but more often than not, that brings the best out of these slot providers. 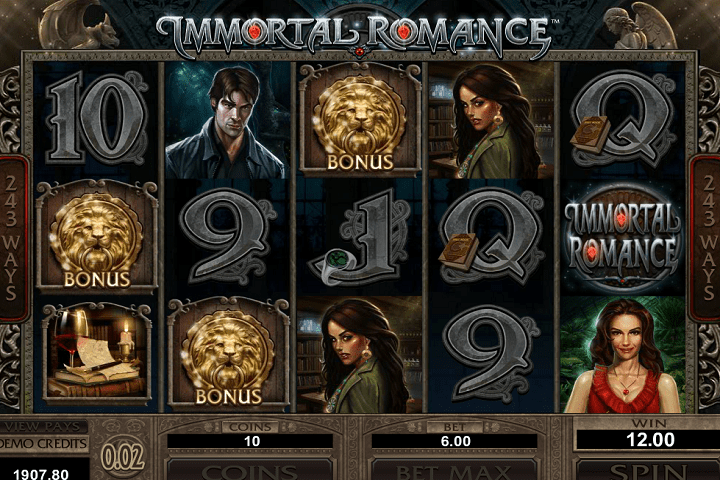 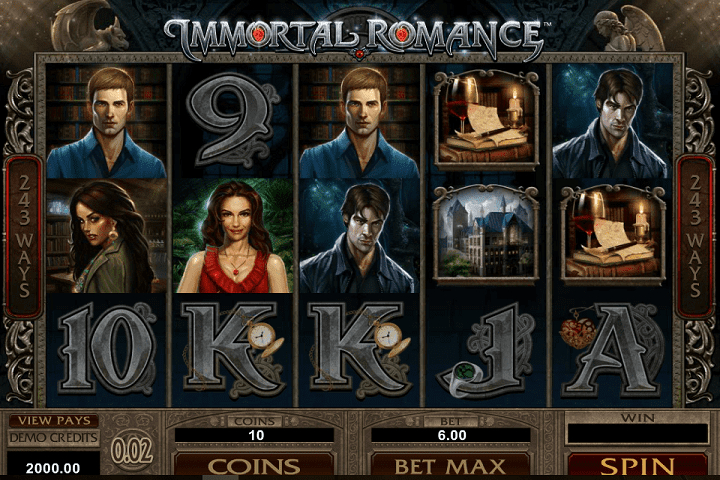 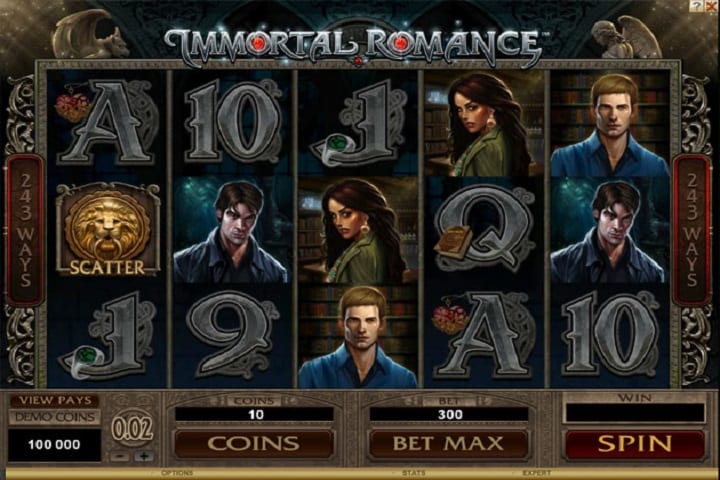 There’s a real gothic atmosphere to this slot from the moment you first open it up, even though the actual characters don’t immediately jump off the page as being intimidating. This slot drives straight into the heart of vampire culture, with the symbols and the theming paying tribute to it. The slot game was first introduced way back in 2011, and in addition to inviting us to try and find the matching symbols and earn some money, it also tests how much we can handle as the slot progressively gets eerier and eerier.

There’s a fairly standard reel setup of 5×3 on the board, which still allows the background enough space to breathe and make an impact. There’s a huge opportunity for potential wins on every single spin, too, with the slot working under 243 ways-to-win technology.

For an online slot you always want to look towards the RTP as one of the first indicators when considering the sort of game you’re in for. Most folks will take one glance at it without giving it another thought, whereas others could use it as a reason to either play or avoid the slot in question. Thankfully, for Immortal Romance, it steps up to the plate in a big way with an RTP of 96.86% which is actually fairly high. Plus, with medium-to-high volatility, you really do need to keep an eye on this slot – because it could produce some big winnings, especially in the eventual bonus rounds.

The betting range is pretty simple to remember with a minimum of 0.30 and a maximum that goes up to 30. For those seeking out big wins, you’ll be delighted to know that there is a delightful possibility of winning 12,150x your initial stake – but you’ll still have to be patient.

It’s dark, it’s mysterious and it feels like we could be attacked at any given moment, which is the precise reason by Immortal Romance is viewed as such an effective slot. The gothic genre is one that a lot of providers go over the top with, when in reality, it’s a pretty simple thing to get right. The soundtrack steadily builds the tension in a way that keeps us hooked, and the actual design work is severely underrated, allowing for one of the smoothest slots we’ve ever seen.

The gothic building setting plays host to the A, K, Q, J, 10 and 9 playcards, but beyond that, you get to see a spell book symbol and a castle symbol. Oh, and there’s also the small matter of the four main characters: Amber the witch, Troy the vampire, Michael the old-school vampire and Sarah the heroine.

There’s a whole lot to be gained from a slot that produces some top bonus features, especially if they work together with the theming of the actual base game. The wild, on this occasion, is the actual Immortal Romance logo, and it is capable of substituting itself in place of any and all other symbols outside of the scatter.

The scatter, in this instance, is the Lion Door Knocker. It serves quite an important function, too, as locating three or more of them opens the door to the Chamber of Spins.

The Chamber of Spins gives you access to four free spin features that are based on the four central characters, with each having their own soundtrack – which is a detail that makes this slot worth playing all by itself.

Amber – 10 free spins with a 5x multiplier. You are also able to retrigger the feature once, meaning that there is the potential for 20 free spins.

Troy – 15 free spins with the Vampire Bats feature. If you acquire the VBs, the symbols will turn into 2x and 3x multipliers – with a maximum of 6x multipliers. You’re only able to access this feature if you get into the Chamber of Spins five times.

Michael – 20 free spins with the Rolling Reels feature. If the wins keep on coming then you could increase the multiplier’s value to 5x, with the feature being available if you get into the CoS on ten different occasions.

Sarah – 25 free spins with the Wild Vine feature. The Wild Vine symbol will be vital on the third reel, as it can change symbols into wilds at the click of a button. You could get up to four more free spins too if you get four scatter symbols, with the feature being available if you get enter the Chamber of Spins a massive 15 times.

No, the jackpot isn’t progressive, but who doesn’t love a fun bonus feature?

There’s something to be said for how attractive this slot actually looks on a desktop, but even with that being the case, we imagine more folks will be interested in trying it out on the mobile. Thankfully for them, this slot is compatible with iOS and Android devices, opening the door for hours upon hours of endless fun – so long as you turn your brightness up.

Immortal Romance does what it says on the tin: it gives us a well-themed slot that is easy to invest in, and just as easy to play. There are some strong winnings for punters who decide to take a chance, and while some may lose interest in it pretty quickly, Microgaming has been smart to cater it towards a growing market.

Vampires may not be your cup of tea, but Immortal Romance is still worthy of your time.