There is a plethora of TV shows and movies out there that have been imitated, recreated and brought to life in many different forms of media and entertainment over the years, but few have defined a generation quite like Game of Thrones. 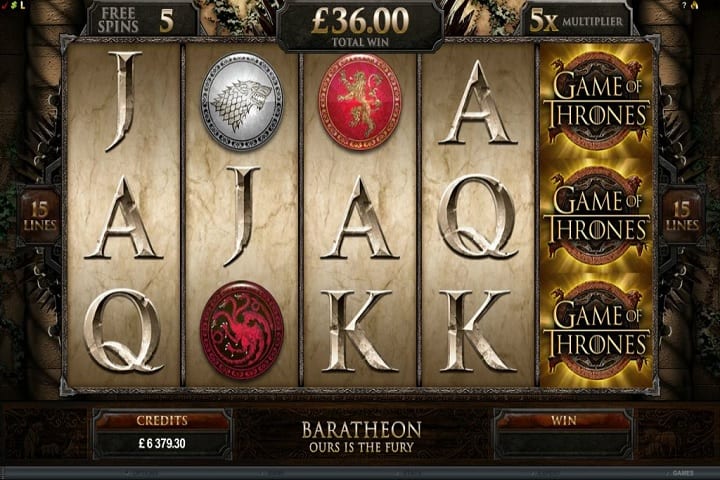 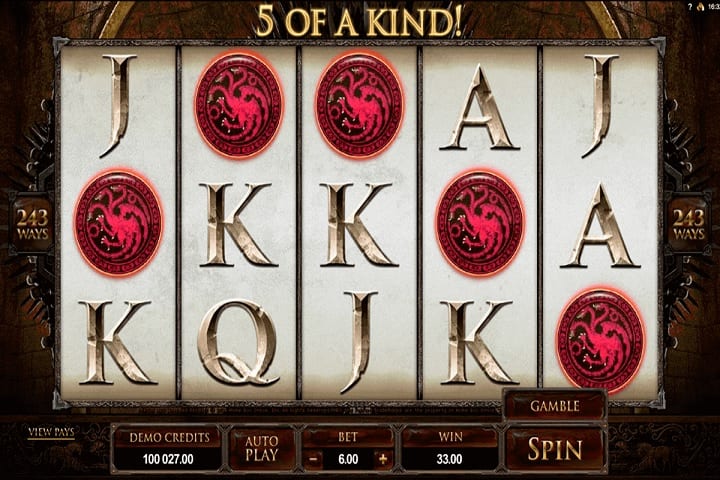 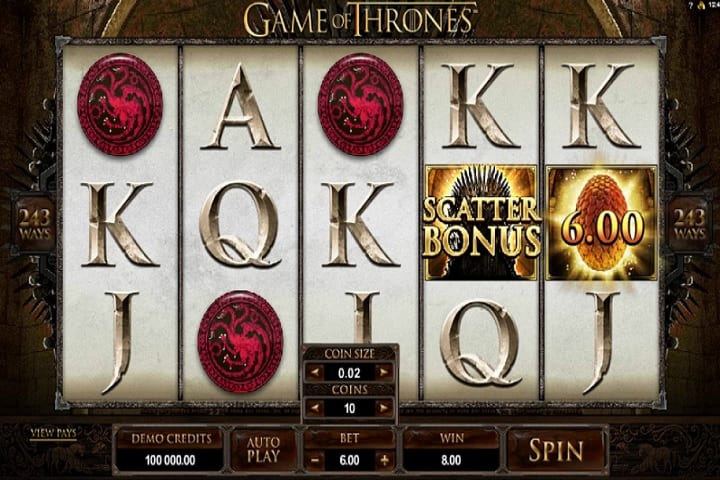 This epic show shifted the conversation when it comes to what the fantasy genre is capable of, and it did so in a way that very few could even fathom. Regardless of whether or not you’re a fan of GoT, there’s no denying that you’ve heard about it in some way, shape, or form.

Today, we’re going to be taking a look at Microgaming’s attempt to completely change the game in slots with their Game of Thrones tribute.

Being able to sit on the Iron Throne is a sacred honour that should be taken incredibly seriously, and we think Microgaming has lived up to expectations in that regard. After all, that does appear to be the core aim behind this slot, which makes sense, given that’s what the actual show was about.

The layout of the game really does stay true to the roots of GoT from the moody lighting to the sense of grandeur that comes with every single spin. It has a 5×3 reel layout, allowing every single symbol on those reels to shine.

In terms of the paylines, there are actually two versions that you can work under in correspondence to this online video slot itself. There is either a 15 payline version, which gives you the chance to put down a bit more money, or there is the 243 ways-to-win version which, as you can probably imagine, is a bit more chaotic.

You always have to be careful with the RTP as it can be incredibly easy to get locked down to the specifics, as opposed to looking at the bigger picture. The financial side of things is, of course, the reason why most people get into slots in the first place, so this is always going to be an element that punters will want to know.

The RTP for Game of Thrones actually varies depending on which of the two versions you’d like to play. If you want to take on the 15 paylines then there’s an RTP of 95.03%, whereas the 243 pays version rises slightly to 95.07% – but either way, the figures aren’t extraordinary, with the volatility being rated as medium.

The same kind of rules apply to the minimum and maximum stake for both versions. With 15 paylines you can get started with a minimum of 0.15 and maximum of 15, and with 243 ways-to-win, it goes from 0.30 up to a fairly low maximum of 6.

Those of you who like to live on the wild side of life could be fortunate enough to hit the big time, and if you do, 20,250x your initial stake could be waiting on the other side.

The soundtrack for this slot, unsurprisingly, is magnificent. This is the official slot for the HBO series so they do possess the rights to the actual theme song, and any GoT fan will tell you that listening to it over and over again is more of a blessing than a curse. It heightens the tension of both the base game and the bonus features perfectly, and while the design work may not always be overly complex, it doesn’t need to be for something as popular as this.

We don’t quite manage to escape the playing cards with A, K, Q and J all making an appearance, before we move on to the real big players. All four of the main houses are on display with their crests being displayed valiantly: House Targaryen, House Stark, House Lannister and House Baratheon.

The Game of Thrones logo itself is the actual wild in this game, meaning it can substitute itself for all other symbols aside from the scatter – and it can also appear on all five reels.

The Scatter bonus feature is triggered when you manage to get two of the GoT scatter symbols, with your reward being a cash prize that is a multiple of the stake you put down. From there, we move on to the most exciting feature of them all as you pick your poison between the four houses.

They’ve all got an individual free spins feature, and as you can probably imagine, deciding between them is an intriguing dilemma, especially if you follow the show with a great passion.

The jackpot may not be progressive, but being taken along for this journey more than makes up for it. Plus, there’s still big money to be won.

Catering to the next generation of players seemingly wasn’t the main priority of game providers once upon a time, but as the years have gone on, that trend has changed.

GoT is the sort of slot that belongs on a mobile device, even if those around you start to think you’re just listening to the theme song over and over again on YouTube. It is compatible with iOS and Android devices, and it runs about as smoothly as you might expect.

They may not have the image rights to some of our favourite characters, but that really doesn’t matter. This slot nails every aspect of Game of Thrones within its capabilities, and it does so flawlessly.

GoT has the potential to be one of Microgaming’s most popular offerings for a long time to come, if only for the bonus features alone. Sure, high rollers may not flock to it at first glance, but they’ll be missing out if they don’t give it a go.

After all, winter is coming.