The horror and comedy genres shouldn’t really blend together all that well, but over the years, the two have been paired together and mastered across various different forms of entertainment. Perhaps it’s the irony of how ‘polar opposite’ they are, or maybe creativity trumps stereotypical ideologies. Whatever the case may be, this combination seems to be here to stay - and we aren’t just talking about on the big screen. Back in April 2015, Microgaming came out with a slot that can quite simply be described as unique: and that slot was Boogie Monsters. As unconventional as it is amusing, Boogie Monsters takes us down a bizarre rabbit hole of thrills, spills and funny characters. Whether or not it turned out to be a high-quality slot, though, is another matter altogether. 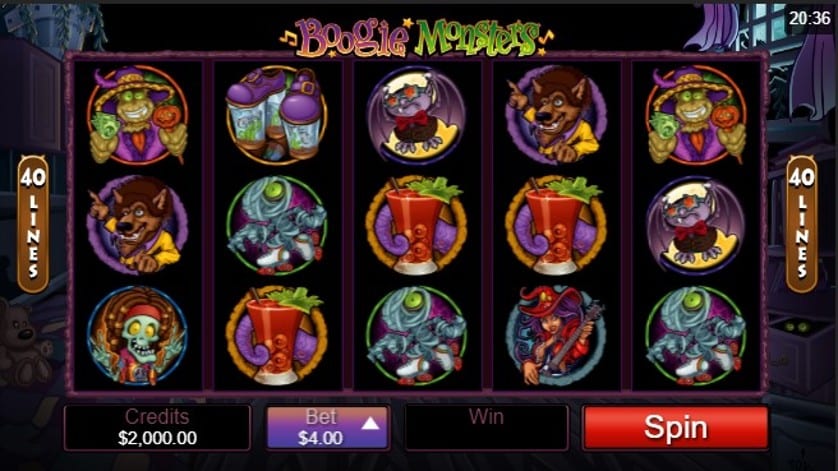 There’s one question out there in the universe that has yet to be answered, and many of us don’t even realise we want to know – and that question is simple: can monsters dance?

This colourful title attempts to blend cartoon comedy and Halloween horrors together, and while it may not always be seamless, there has to be some level of admiration from the majority when it comes to the end product.

While the aim of the game may be to come away with as much money as you possibly can, players often find themselves getting caught up in embracing every single element this game has to offer.

The layout gives us a fairly standard 5×3 reel, on a board that actually feels a whole lot smaller than some of the other software you can find at Microgaming casinos. They perhaps wanted to make it less messy, but whether or not that actually made for a fun design is something we’ll touch on later in the review.

There are 40 paylines on the table for punters to work their way through, and with a fairly unremarkable figure like that, you’d have to imagine they’ll go all out in other features of their slot game.

Some slot players are sick of hearing the letters RTP, whereas others won’t even touch a new game until they’ve got a feeling for what kind of return they’re going to be looking at. For Boogie Monsters, newcomers will be satisfied enough to learn that the RTP comes in at 95.7% slot. When you put that together with a medium volatility, BM falls into the ‘not too bad’ category – although the steady Eddies out there will consider this a big plus if they’re looking for constant and consistent payouts.

Players are able to start off their slot experience by placing a minimum wage of 0.40, with the high rollers amongst us being able to ride that all the way up to a maximum of 200. Don’t sleep on the potential big bonus game winnings, either, because you could wind up walking away with an astonishing 50,000 coins.

A bunch of weird toys are having what appears to be a disco in what seems to be a child’s bedroom – but the uncertainty of it all is what throws us off a bit. The theming is okay but the design doesn’t do it justice whatsoever, with the dark and moody tone of the game just coming across as lazy. The Addams Family-esque soundtrack doesn’t really do all that much for us, either, and it gives off the aura of a failed pilot show on Cartoon Network that they just decided to turn into a slot.

The actual symbols are as weird as you’re probably picturing them to be, and instead of playcards, we get to see platform shoes with installed goldfish, a rollerskating mummy, a Bloody Mary cocktail, a scarecrow pimp and a well-dressed werewolf. If that doesn’t get you invested, nothing will.

One of the biggest alarm bells that stems from this slot game is the distinct lack of a wild symbol in Boogie Monsters. In order to make up for that, though, the slot does feature two scatter symbols – with one being the lava lamp and the other being the fat bat, with both unlocking a different bonus feature.

The lava lamp unlocks the door to some free spins for punters, with three or more lava lamps on the reels leading to a Lucky 13 free spins with a 5x multiplier. You can, if you’re ‘lucky’, also retrigger free spins if you manage to land on even more lava lamps.

The other scatter, the fat bat, can trigger a different bonus road if you find three or more of them. In this mini-game, you have to use a torch to try and find monsters. Each of the monsters you discover, with three of the 12 being available during gameplay, leads to a different prize – which could wind up being the 60x multiplier grand jackpot.

Speaking of jackpot, though, there’s nothing progressive to be found in Boogie Monsters, which isn’t all too surprising – but there’s still a lot of money out on the table.

Mobile compatible casinos and slots makes the slot world go round, with Microgaming ensuring that Boogie Monsters is ready to play on iOs and Android services. It isn’t the smoothest of slot games to play on your phone, and you certainly don’t get to fully appreciate the characters unless you see them in all their glory on the desktop, but at least you can play BM when you’re on the move.

It’s always nice to see a provider think outside of the box, but we aren’t going to pretend like this has been a slam dunk a slot from Microgaming. The gameplay itself isn’t exactly inspired, the design work is below par, and there’s a distinct lack of bonus game entertainment – with the lack of a wild symbol serving as undeniable proof of that.

There’s something to be said for the novelty of drawing in a specific type of slot player, but this is the kind of slot that will only really be able to shine on October 31st.