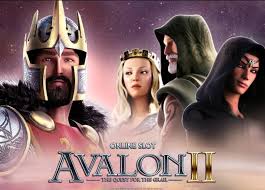 Can the sequel ever truly be better than the original? Most of the time the answer to that question all comes down to personal preference, but in reality, most directors and producers want to create something that is indisputably better than what came before it. There aren’t a whole lot of people in this world that can pull it off, but when they do, it’s quite the feat. Today, we’re going to take a look at Microgaming’s 2014 release that attempts to do just that: Avalon II. We’re taken on a journey that tries to expand upon what the first slot in the series brought us, and we want to figure out whether or not they succeed in that mission. 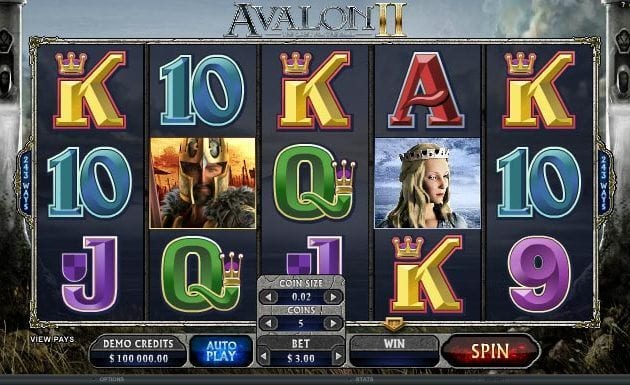 The heart of the slot remains the same – try and retrieve the Holy Grail. You’re going to see and experience some magical things along the way, and as is the case with a lot of Microgaming games, you’re going to be pretty impressed by the visuals.

There’s a map towards greatness that will see you travel through some fascinating destinations, most of which will eventually be explored in the bonus features. It’s dark and it’s moody, but at the same time, this slot does pay tribute to a genre that many look on with great fondness.

There’s a fairly standard layout on display with 5×3 reels and rows, which really does help the symbols to shine in the limelight.

Every single spin possesses great potential with this slot, and if you don’t believe us, believe the 243 ways to win technology.

You should always be aware of the RTP that any slot game may have, especially if you don’t want to be flying blind. After all, while there may be no guarantees when you’re getting stuck into a good slot, it’s nice to find out what the likelihood is of success.

The RTP for Avalon II is 95.92%, which qualifies as being just above average. The volatility is said to be medium, with most reporting bigger wins in the bonus features, but the base game is still worth a punt.

In terms of what you can actually put down on any individual bet, this isn’t the kind of slot that is going to immediately jump off of the page for the high rollers. You can get started with a minimum stake of 0.30, and if you want to go hard in the paint, you’ll have to settle for a maximum of 7.50.

However, due to the bonus features, you may actually be able to take home an absolutely insane £120,000 if you play your cards right.

The animation for Avalon II really is out of this world, and it’s obvious to see that they’ve been working hard in an attempt to improve upon the original. The soundtrack may be a bit repetitive at times but if you’re willing to stick it out and progress through all of the sections, it could wind up feeling like a legitimate video game.

The gameplay can lag from time to time courtesy of the insane animation work that has been done, but we think it’s pretty easy to get over that when you consider how impressive the end result actually is.

From 9 all the way up to the King and the Ace, there are some playing cards featured in this slot that do look a little bit out of place. Thankfully, we manage to delve further into the theming with some of the other characters and symbols, starting off with the Black Knight. We then move through to Morgan, Guinevere, Merlin, Arthur and the actual game logo itself. Oh, and there’s the small matter of the Holy Grail itself, too, which acts as a bonus.

Bonus features are important at the best of times, but for a slot like Avalon II that legitimately takes you on a trail through the wilderness, they’re vital.

The Lady of the Lake is the expanding wild that can substitute itself for the other symbols which, in itself, should lead to more than a few big wins – but the core of the bonuses stem from the Holy Grail. If you land three or more Grail symbols on the board, you will be taken through the Kingdom as you venture on a quest unlike any other.

Misty Value – You will receive 15 free spins with a 1x mulitplier, and you’ll be able to select one of the high-end symbols that will act as an extra wild throughout the feature, with the extra wild having a 2x multiplier.

Whispering Woods – Pick from one of five options as your shield in order to try and get the highest multiplier – with 160x your initial stake being up for grabs.

Forest Falls – You get 20 free spins with a 1x multiplier with the Avalon II wild being the trailing wild. If and when it lands on either the first or second row, it will be held in place before expanding down the reel.

Dusky Moors – There are twelve items on the screen and you have to match two helms of the same description. You keep picking until that happens, with a potential multiplier of 20x being available.

Morgan’s Keep – You receive 20 free spins with a 2x multiplier with Rolling Reels applying. On every free spin, if you strike gold, you could get a 6x multiplier as the maximum.

Hall of Shadows – Each move you make gives you a cash prize in a slot that sees you battling the deadly Black Knight – either blocking or attacking as you try to claim the Grail.

Isle of Avalon – Spin the wheels to win the highest bonus multiplier as your ultimate prize awaits.

The jackpot isn’t progressive, but do you really think it needs to be?

As a mobile casino game, Avalon II is as slick and to the point as they come – with the lag experienced on the desktop not really carrying through to the iOS and Android equivalents all too much, meaning that you can play it on the go with relative ease.

Avalon II doesn’t completely blow the first game out of the water, but it’s definitely an improvement in certain areas.

The theming is great, the design work is admirable, and the potential winnings are higher than what most of us earn in a calendar year.