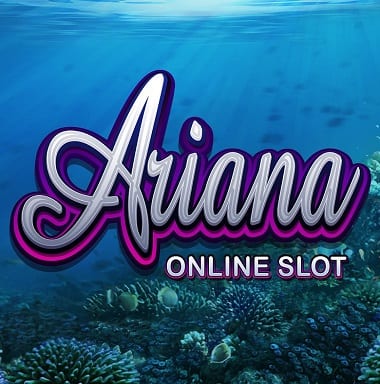 We’ve all watched Little Mermaid and we’ve all come to learn what it means to be entranced by the underwater princess - and in a 180 from what we’re used to seeing from them, Microgaming gives us the slot game equivalent of that fairytale with the one and only Ariana. There’s always some kind of drive behind the modern slot game to catch us off guard or make us feel like we’re under some kind of pressure, but with Ariana, that feeling drifts away. All of the permutations and potential bonuses may be on the tip of our tongue, but instead of being the first thing out of our mouth, we focus instead on the stunning utopia that has been placed in front of us. 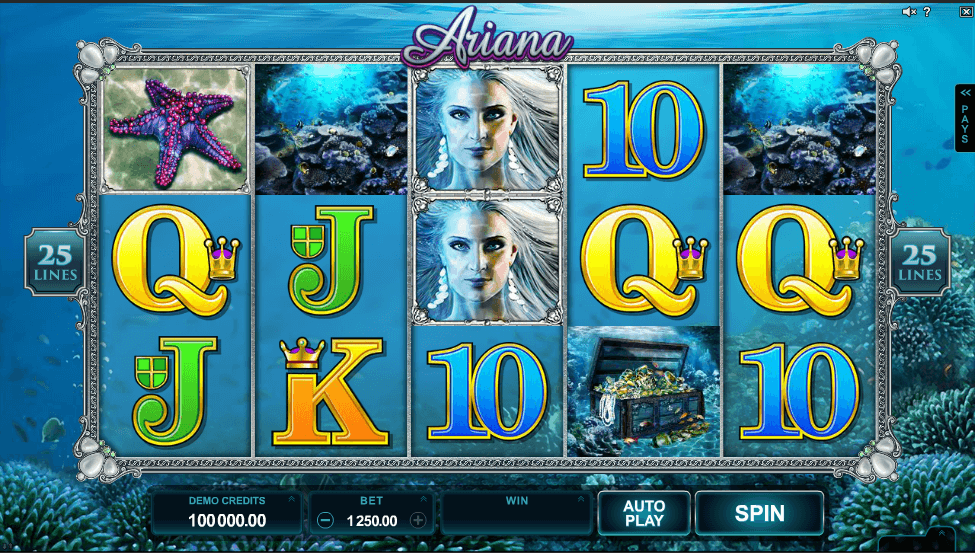 The RTP lands itself in the unremarkable section when the comparisons start flying out with some of Microgaming’s alternatives, but at 95.48%, it’s still better than some of what you’ll see out there on the open market. This creation first came to be in 2015, which is probably one of the reasons why it shines so brightly in the graphics department ahead of so many other competitors.

There are 25 lines to play on with a minimum bet of 0.25 and a maximum of a whopping 125, so don’t be too fooled by the appearance of the temptress Ariana – for she has quite the bounty lurking beneath the water.

Ariana’s 5×3 reel layout really does shine within the context of the theme they’re trying to go for, and it highlights the symbols nicely. The smooth spins move like they’re actually underwater with the core aim of the game being to keep going until you’re able to match some of them up. If you want to feel like you’re driving around in a Tesla, you can simply hit the autoplay button and watch the world go by without having to click or do a single thing.

With the 5×3 reel working in sync with the underwater look, Ariana’s layout really is the star of the show. The soundtrack leads us to believe that we’re in the midst of the greatest massage of our lives, all the while helping us to unwind and pick apart the intricacies of this game – or, lack thereof, depending on your personal preference.

While matching up the graphics to different shades of blue and silver may have been the right way to go, there’s always going to be a certain appeal that comes with the rainbow effect.

Some of the symbols are familiar with 10, J, Q, K and A all making an appearance, but right alongside them comes the treasure chest, coral reef, starfish, seaweed and the one and only Ariana. But wait – there’s more!

When the higher value symbols are stacked onto the first reel, the matching symbols then expand to fill up to their own respective reels. With this feature comes the potential for a wave of success, and that cannot be underestimated as one of the very best factors in Ariana’s appeal.

Aside from the impending jackpot prize that we’ll come onto shortly, there’s always the chance that you could walk away with up to 240x of your initial stake. It’s not the kind of number that is going to get you into the Ritz, but it’s better than nothing.

One of the available wilds appears in the form of the Ariana slot logo, whereas the purple starfish is the main attraction in regards to the scatter symbol. From there, the bonus features in the game live and die on the free spins bonus.

In the feature, which is triggered when landing three or more of the aforementioned starfish scatters, any full symbol stack on the first reel will expand to the highest matching symbols. Given the nature of the layout, we can guarantee you’ll be in for a few false alarms.

With the jackpot, the figure is set at a predetermined 30,000 coins in the Euro currency. It’s up there in a substantial sense, but the kings and queens of the slots game universe will correctly suggest that there’s bigger fish to fry elsewhere – and that there are more thought-provoking games to go alongside that reputation, too.

Being positioned as a basic game isn’t the kind of reputation that you can shake off so lightly, and while Ariana doesn’t try to do so, it’s still plain to see from the outside looking in that there’s more excitement out there to be had.

As you can probably imagine, Ariana shines bright like a diamond on a mobile casino platform and can’t really be differentiated between the desktop.

All you need to do when using your chosen casino is log in through your device, whether it be iOS or Android, and go from there. It works on both and acts as a soothing yet enticing slot, which isn’t a description that’d be used universally.

The game has actually been designed so that it works efficiently on both systems, and that’s hardly going to be the biggest shock of the day for those who follow the work of Microgaming. They take precision and care in the design of their work, and that’s one department that can’t be flawed in our eyes.

Being able to relax on a slot game is a forgotten commodity, with the majority of software developers investing in the idea that ramping up the anxiety element is the right way forward. With Ariana, that ‘tradition’ is broken once and for all.

What isn’t broken, however, is the simple fact of the matter that Ariana does not differentiate enough from her competitors in any department outside of the graphics. The bonuses just kind of exist, the amount back from your initial stake could be improved, and there lacks a real challenge to the gameplay.

Ariana will forever have our hearts, but perhaps not our wallets – although, for a 2015 addition, it really is gorgeous.