Beyond the constraints of the Las Vegas stereotype comes the blossoming excellence and beauty of an African setting - and, more specifically, the rising star that is African Quest. This Microgaming creation gives off a unique backdrop to a genre that could use a little more spice and sizzle. The sights and sounds take us straight back to the feeling of being on a gorgeous sunset safari, and within the context of this crazy world we’re living in, it’s important to immerse yourself in that kind of atmosphere. It may come across as just your average slot game, but the developers attempt to go above and beyond in the name of giving fans a different flavour than what they’re used to seeing from day to day. 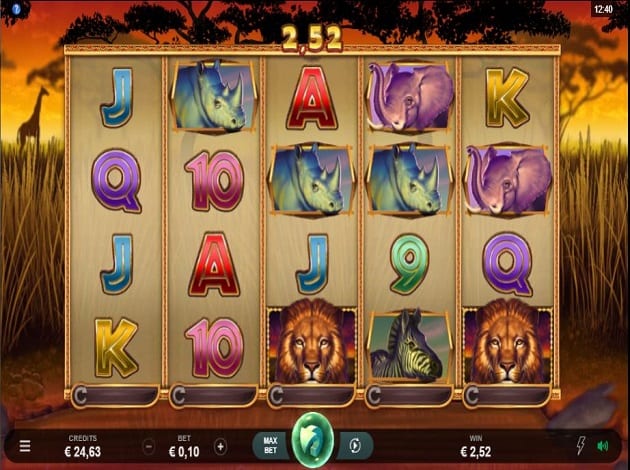 In a highly volatile game such as this one with an RTP of 96.52%, you know that you’re in for some drama. There are 1024 possible ways to win, with the possibility of wagering anything from .10 coins to 15 coins per spin.

It’s a quick game and can be described as more fluid than most, but if you want to get into the habit of speedy play, you’ll have to take what you can get in regards to appreciating the landscape you see around you.

Victory comes when landing three or more matching symbols on adjacent reels with the highest paid symbol, of course, being the lion.

There are often home screen offers that come flooding through every single time you load up the game, but the premise, while gorgeous, is fairly simple and to the point.

Taking a deep breath, hitting the play button and allowing the spirit of the game to engross you isn’t a feeling you get with every single slot. The open savannah makes us feel like we’ve been transported to surroundings unlike we’ve ever seen before, with an orange and yellow mirage blessing us as we begin our journey through the game and through the green grass.

From there the symbols, laid out on a strong 5×4 table, greet us. While it would’ve been nice to see the colour scheme run through the numbers that are listed, it’s intriguing to see the 9, 10, J Q, K and A build-up to the main event: with that being, of course, the animals themselves.

Alongside the sunset scene and Map of Africa comes the favourites we’ve all grown to love as the years have gone on the zebra, elephant, giraffe, rhino and of course, the king of the jungle, the lion.

Payouts tend to be quick and to the point, as is the case with the majority of providers these days, with the African Quest handing players the chance to earn up to 5000x their initial stake. Money like that doesn’t come around every day and while it’s much more likely that you’ll receive small to medium payouts, courtesy of this being a highly volatile game, the youth of this slot with it only being introduced in January 2020 gives us great hope for the future.

There isn’t an excess of bonus games on offer, per se, so it all comes down to what kind of entertainment value you get upon first playing the AQ. There are free spins galore to be exploited from the moment you load it up, and if you connect three or more Map of Africa scatter symbols, a free spins game does activate – but whether or not that floats your boat comes entirely down to personal preferences.

Multipliers are all the rage right now and that’s the case here too, with the possibility of securing 64x your winnings being of real interest, as you can imagine. The sunrise symbol can be a ‘wild’ symbol in the game and can substitute itself in for any of the symbols on the second, third or fourth reel, boosting your prospects ever so slightly.

While the allure is clear and the appeal is there, unfortunately, there’s no African quest jackpot on the horizon at this moment in time. The potential is there for a progressive jackpot, but within all great slot games lies a certain degree of potential that has already been fulfilled. Within the context of African Quest, it’s all about seeing whether or not it is capable of reaching that next level.

With this being such a fresh game on the market, it makes sense that it plays really smoothly on mobile devices. When you’re out and on the move and you’re looking for an escape, African Quest will be there.

It has been tailored to devices both big and small from a handheld phone to a slightly cleaner smartphone model – whatever your heart desires.

You can play this game at any point during the day and get the same kind of consistency as you would on a Mac casino, which is always a good sign. It’s identical to the desktop equivalent so it maintains the real heart of the production, and that’s what most players are searching for.

African Quest is a step above the beginner entry games and while it may not be viewed as the most intense adventure out there, it doesn’t need to be.

With high stakes and entertaining visuals, Microgaming is off to a wonderful start with something that could turn out to be a real game-changer for them. The high profile players appear to be leaning more and more into what the game has to offer, and in a market as competitive as this one, that’s always good news.

Whether or not the pacing could be slowed down to go alongside a fresh, big jackpot remains to be seen, as this slot can still be seen as a baby in the wider context of its competitors. It does just enough to stand out amongst its peers, but whether or not it’ll get lost in the shuffle as the game continues to evolve will be really interesting to see.