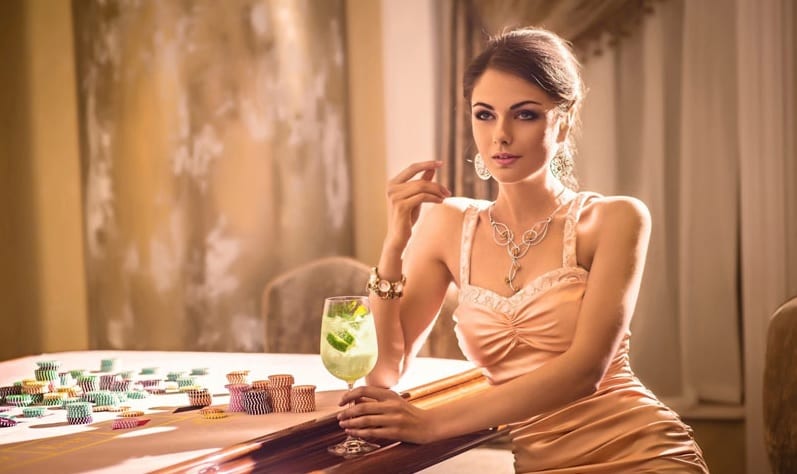 Throughout history, the culture and appreciation of women was heavily relied upon. Many pagan and norse cultures believed women to have the insights needed during gambling rituals back in the days. It is very strange to think, many years ago a woman's status was honoured and respected, then throughout history their rights and freedom was very much lessened.

Yet now in present day women do have a voice and the right to do whatever they want, from voting to gambling etc. So we thought this to be an opportune time to highlight all the influential women of the gambling ages. So let us get right to it.

The Spiritual Gambling of Pagan Witches

In the pagan cultures, people worshiped the goddesses and gave them such high priority over the decisions that they made in life. The goddess Freya was the one that conspired with her human descendants, providing them intuition, visions and magical abilities. For that reason many of the women back in these ages were known to rely on the gods via sacrifices and religious ceremonies to aid in their gambling activities.

The entire concept of rolling dice came from the origins of norse traditions. Pagans used to throw crystals with different faces. If a certain face lands, then the following decisions or actions would be made. So essentially their life was lived on gambling.

Feminine power was the necessity of forming a decision back in the days of viking practice. The gods spoke through women and thus the decisions made by women were honoured and drew up much influence within society of that age. It was always the case that women were demanded to be present in correspondence to the gambling nights that vikings carried out. They believed women held the luck of the gods and therefore would bring success to all their gaming activities.

Did you know that the term ‘Lady Luck’ originated from norse culture and religion. The men that were brought alongside within gambling activities, were the ladies of luck and therefore that term was used in association.

The Story Of Poker Face Alice

America's Wild West, brought to tale many speakings of theft, robbers, gold diggers and gamblers. This era was dense with infamous casino bars and gambling nights that there are many tales to tell with the immense popularity that gambling had at the time.

The story of ‘Poker Face Alice’ is about the tale of a famous gambling individual woman that brought havoc across the casinos of New Mexico, Oklahoma, Texas, Kansas and South Dakota. She was such a hustler that it was known for her great talent in fooling her opponents into not suspecting her talents in the game of poker.

Making the game an art to her skills, she actually managed to win great amounts to the degree of $6000 dollars from just one table of opponents. They all say having a poker face is key, but it seems Alice was ruthless when she practiced what she preached! Her skills made her so famous that men became putty in her hands, and she really did woo them with her skills.

It was the game of poker that allowed her to meet her husbands (yes three of them), to which they really did hit the town together and take people for all that they had in the process of gambling.

It can be said that Alice really did help the times along dramatically. It was in the year 1977, that the first female poker tournament was launched, and women could really play for significant titles and wealth. Many men at the time tried to close the tournaments down due to claims of discrimination, but maybe women afterall do have the best poker faces…. The largest winner in poker to date was a woman in fact, a woman named Vanessa Selbst, who was lucky enough to go home with a total of almost $11 million dollars!

Ancient rome is often described as a civilised society with great insights to music, culture and the finer beautiful things in life such as fashion and jewellery. The Roman gods had always taken a great hold onto everything that Romans practiced on a daily basis, so it comes at no surprise that they also had a goddess of luck and chance, in retrospect to gambling.

The goddess Fortuna, was spoken about greatly, especially by the likes of rulers and people of great wealth and social standing. To honour your chances in anything you did, be it a game against an opponent, or if you are out for battle etc, you would place gifts and keep Fortuna in your thoughts, so that good fate will be bestowed upon you in great numbers. If you happen to have bad luck then you would have to come to a conclusion that your prayers were not accepted for whatever reason that may be.

The goddess herself, Fortuna, was very loved by all people-especially the not so wealthy of the times. People often suffered from the plague, illnesses and famine, so faith and a goddess that was believed to share good luck in people's fates was very much welcomed by all.

During the Roman times, men and women were permitted to gamble, however the situations of both were quite different. Men could gamble anywhere anytime, whereas women would only be allowed to gamble within public events and festivals where gambling was shared with just females only. However, Nero the emperor did relax the rules and allow women to gamble without any restraints in society and events.

During the 1800’s, women were not permitted to gamble as wildly as men did. King George prohibited womens gambling due to it being considered an immoral and out of character act for a woman to be a part of. For that reason, many women would secretly take part in gambling gaming from the comforts of their own homes or within secret society parties that were just held for women only. This lead to women being forced to keep their love for the cards and odds for social meet ups only, acting with an appropriate nature when in the presence of men.

In response to such restrictions, many women actually became so skilled at playing cards, due to dedicating the time to play it and once society began to realise their skill, women with good talent in card games were addressed as ladies of the Faro. Such names became greatly spoken about and it was two women in particular that carried the torch for gambling acceptance for women in society: Lady Sarah Archer and Lady Elizabeth Luttrell.

The Battle of Female Gambling

Women throughout history as we have showcased above, have had issues with the ability to gamble at free will and whenever they so wish to. However in today's day and age, women are really making waves within the gambling industry. Just recently, a female betting enthusiast has managed to win from a bookmaker more than £1 million overall, just from betting on horse races.

At just age 19, Megan McCann placed a series of bets which equated to £25,000 overall. The bookmaker was none other than Bet365, which hosted a series of betting opportunities that go across different classical online casino and sporting outlets. On the 22nd of June 2017, her luck broke and her betting was awarded with victory beyond imagination!

But just as the luck strikes, unfortunately Megan McCan was not permitted to cash out out her winnings, due to being believed to have had help from accomplices that have experience in the betting field. The bookmaker also believed that her funds were not of her own and therefore stripped her winning status from her just as quickly as she won them.

The question arises however, would this have been the case if a male winner landed such luck in the same position? That could be debated upon greatly.

But one thing that remains as rather amusing, the owner of Bet365 is a woman called Denise Coates, who has an estimated net worth of £3.2 billion. Surely with such wealth paying up seems rather easy and not so much of an issue? Yet nevertheless, these two women will face it out in court for the right to win the case entirely! Guess we will need to sit back and await the judgement of the law to surpass the decision.

Either way, £1 million certainly is a lot of money and we would miss it too, if we happened to lose a case as huge as this!