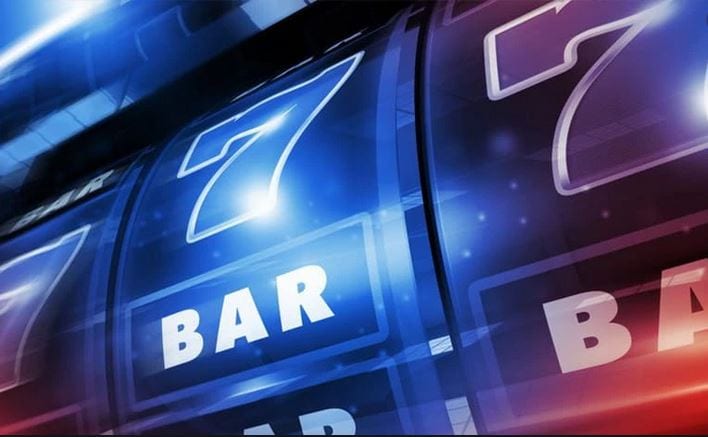 Whether you've been playing slots for a while or been watching someone else play slots online, you'll have heard of the term RTP mentioned more than a few times. If you don't know what it means, it's clear that RTP is an important factor for slots.

In this guide, we'll go into everything you need to know about the RTP concept, how it integrates with slots, and how it should influence what games you should (or shouldn't) play.

In a nutshell, RTP stands for Return To Player. It describes how much a slot pays back to players over a large number of spins, typically expressed as a percentage. For instance, a slot with a RTP of 96% will give you back £96 for every £100 that goes into it. So this info basically tells you how much you might expect to lose when playing a particular slot game.

It's very important to know that this number is worked out based on a huge number of spins though – usually millions. This means that over a short session of a few hundred or few thousand spins, anything can happen, which is what makes slot games as exciting as they are. A game that paid back £95 exactly after 100 spins played at £1 a spin would hardly be fun to play.

RTP in Slots: The Math

The set up of RTP for a slot machine is a complex process. It's harder the more elaborate the slot game is. If it's feature-rich and has a large number of paylines, software developers should work out, at the end of the day, that the game returns exactly the percentage expected.

To sum up, a slot is always programmed in such a way to give back the percentage of the money that is put in, total. What can vary though is the distribution of the RTP – something we'll move onto in the next section – though ultimately, a slot with 97% RTP will give back 97 per cent of all the money that goes in based on an infinite amount of spins.

RTP is regularly mistaken for variance of a game (and vice-versa). While these concepts are loosely related, they aren't the same. We've already explained Return To Player and what it means in summary. Let's now cover variance.

Variance defines how a slot game's RTP is realised. Lower variance slots are programmed so you'll win little and often, meaning you keep your head above water and able to play more spins without going bust. Higher variance slots pay out less small and medium wins in the base game, though you can find some big hits in the bonus features.

Not all high RTP slots are neccessarily good to your bankroll. Generally speaking though, slots with highest RTP are a better choice than those with a lower percentage, however if your slot game is a highly volatile one, you can go through many thousand spins before getting close to the true RTP.

Land-based v. online slots: which have a better RTP?

Most players who go from land-based casino slots to online slots tend to come to the conclusion that the latter is better to play. And while the gambling world is full of misconceptions, this isn't one of them.

In a large majority of cases, online slots do play better than brick and mortar casino slots.

Most slots online have a significantly higher RTP. Land-based slots are usually set to return to player anywhere from 70 to 90%, with very few games surpassing 92%. In terms of online slots, anything below 94-95% would be considered bad. Most new games have RTPs greater than 96%.

This isn't some kind of brick and mortar casino urban myth, as well. The reason slots in physical venues are set to return to player less than online is because land-based casinos have limited space. They have to make more money from physical machines on their floors to keep up with expenses and turn a profit.

Online casinos, meanwhile, can have hundreds or thousands of slot machines to play at a given time, with no restrictions on physical location. As such, they can then afford to offer slots with the best payout rates.

Truths and Myths About RTP in Slots

Let's now address some truths and myths about RTP in slots. Over the years, many players have hypothesised about how RTP works and what can and can't be done, so let's take a look at some of them.

Online casinos can manipulate RTP of their slots

Simply put, this is not true. Online casinos don't own the slots they offer for playing on. They merely pay a price for the slots from game developers. These games a typically sotored on the developers' servers, which means the online casinos don't have the kind of access required to change core settings such as RTP. Some providers, like Play'n Go, do offer games with several RTP variations, but the casinos themselves can't change a random slot game at will.

RTP is completely irrelevant for a single session

This is true and not true. Anything can happen in a single slot game session and actual RTP is very unlikely to be met, so that's why players say the information isn't as important. That said, a slot paying 96% RTP will play better than a slot paying 86% RTP. So while you can still win and lose on both of these, you'll win more often on the slot with highest RTP, so you're better off playing that one.

In most cases, this is true. Slots with a progressive jackpots might be advertised as having an RTP of 94% for instance. Though, part of that RTP is usally realised through progressive jackpots. So this means, unless you actually win the jackpot, you'll be playing a slot game with an RTP significantly lower than what's been advertised.

Knowing all you need to know about RTP in slots, let's have a look at some of the best RTP slots games (not to be confused with the best slot sites) – i.e. those games that offer the highest RTPs. With what we've said in mind, in these best paying slot games, you're necessarily getting a big win, though they will typically play well and give you a decent amount of play-time. 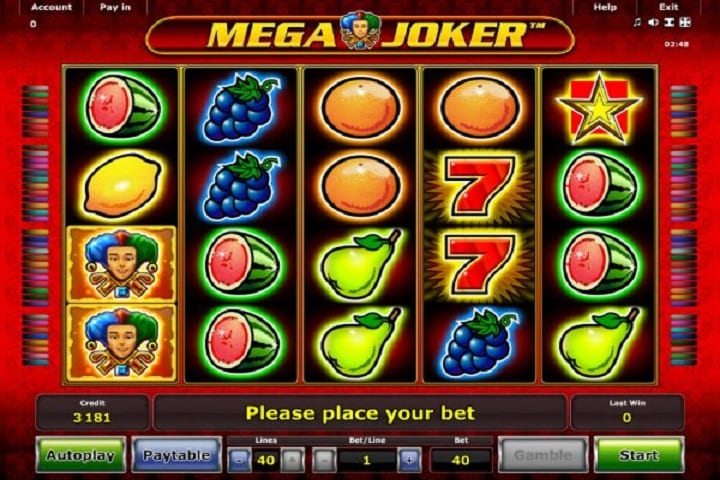 Mega Joker (up to 99% RTP) – Mega Joker is a NetEnt classic slot made up of three reels and fruity symbols. Slot RTP actually changes based on the stake level you play at. To reach the best return, you'll have to bet 10 coins. There is some element of skill required for this game too as you must know when it's best to collect the winnings from the Supermeter. Not only does this slot have the highest RTP on our list, it boasts a progressive jackpot too. 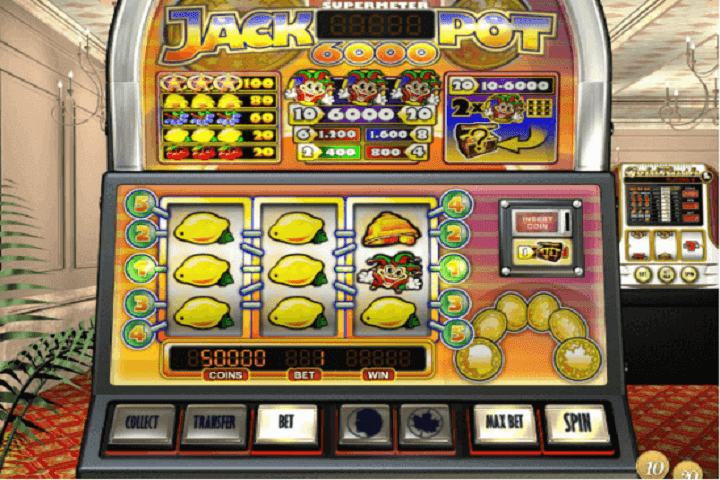 Jackpot 6000 (up to 98.8% RTP) – Jackpot 6000 is another classic slot from NetEnt, and is quite similar to Mega Joker. Playing this game at the maximum bet of 10 coins and studying the Supermeter strategy is needed to reach the best possible returns. A good game for those who like to be more involved and actually able to influence their result to some extent. 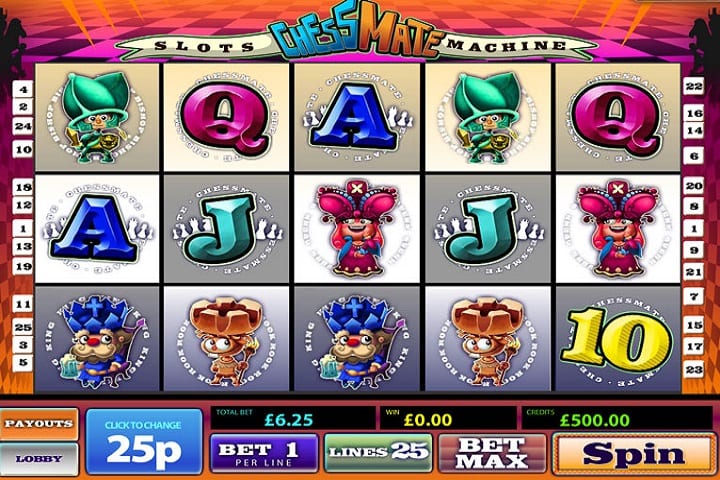 Chess Mate (98.7% RTP) – Relatively unknown developer, Multi Slot, produced Chess Mate. This is a colourful and nicely animated slot offering 15 paylines, a couple of bonus features (including free spins with a multiplier up to 9x), and a high RTP of 98.7%. While this slot is quite rare, so you won't find it at many online casinos, it's worth a try if you do come across it. 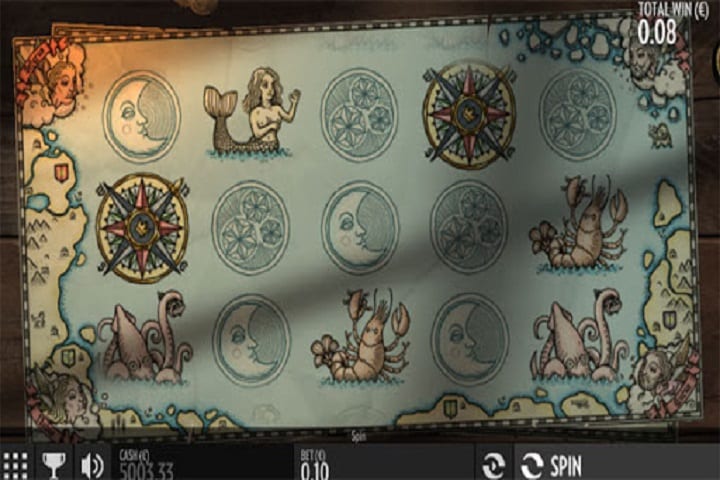 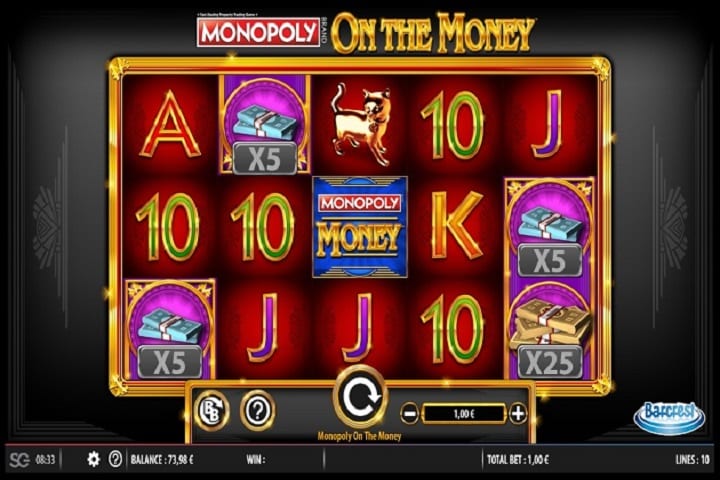 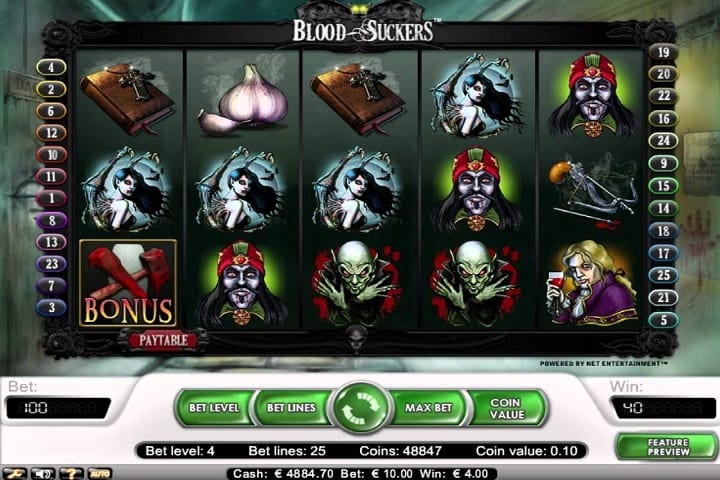 Blood Suckers (98% RTP) – The Blood Suckers slot is another game by NetEnt, though unlike the ones mentioned earlier, is actually a proper video slot with two different bonuses, 25 paylines across 5 reels, and very low volatility. It's vampire-themed, so if you're a fan of that and you needed another reason on top of it having an outstanding RTP of 98%, Blood Suckers is well worth your time. 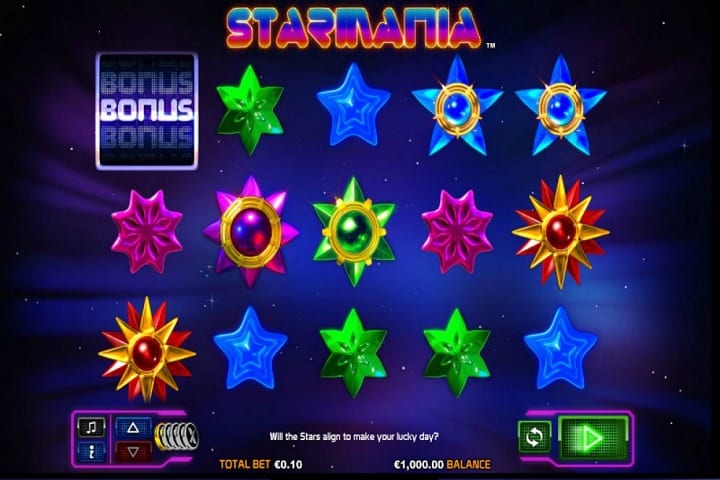 Starmania (97.87% RTP) – The brainchild of NextGen Gaming, Starmania will certainly remind you of another well-known game that we needn't even mention the name of – if you've ever taken a free spin at an online casino, you'll know. With colourful symbols on the reels, this 10-payline slot pays both ways and features an RTP of 97.87%. 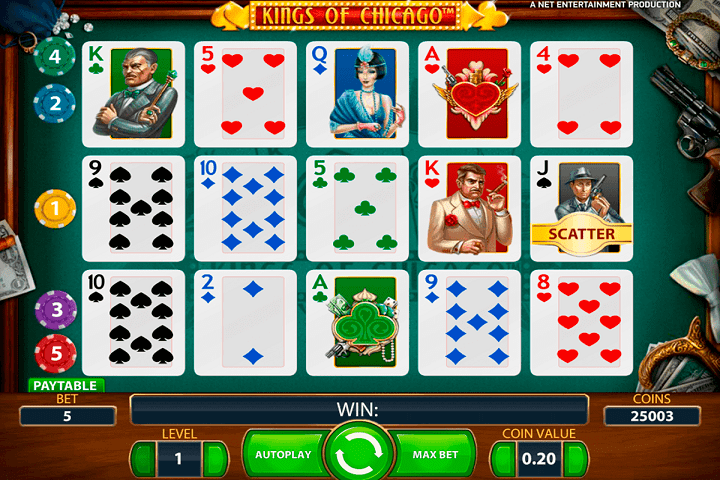 Kings of Chicago (97.8% RTP) – And we return to NetEnt's back-catalogue, and their Kings of Chicago slot – a game entirely based on poker. Instead of classic winning combinations on the reels, you'll be paid for making poker hands from trips to straights, flushes to full houses and quads. If you're a lover of poker and slots casino gambling, then this is game is the ideal combo for you, especially with its high RTP of 97.8%. 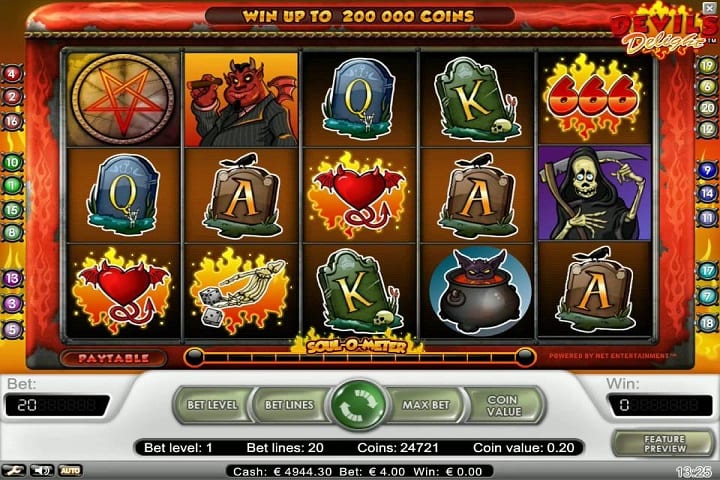 Devil's Delight (97.6% RTP) – The final NetEnt game to be featured in our slots RTP list, Devil's Delight has an RTP of 97.6%. Well-animated, with several bonus features and the entertaining Soul-O-Meter, it would be worth a try even without this high RTP. With it, it's a definite must-play. 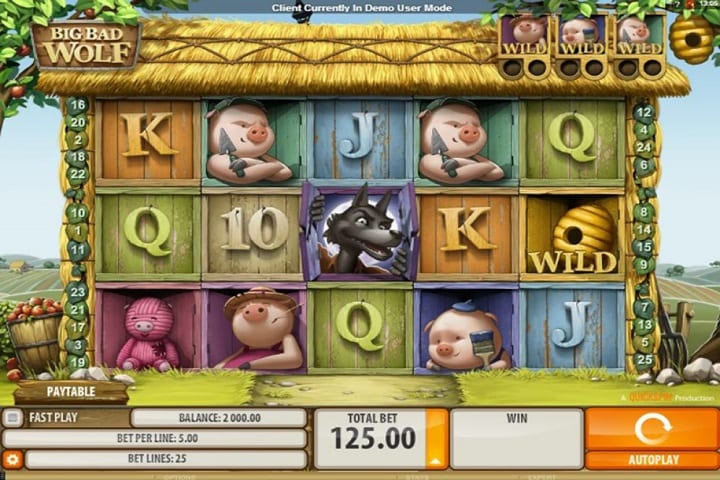 Big Bad Wolf (97.4% RTP) – Almost not making our list of top 10 slots with the best RTP is Quickspin's Big Bad Wolf. This slot is based on a well-known fairy tale, and is quite exciting with little pigs turning into wilds and symbols cascading onto the reels. And with a high RTP of 97.4% and low volatility, the game is a great choice if you're looking to make the most of your time at a slots site and your bankroll.

Players are always looking for top value for money, and understandably so. Finding the best RTP slots to play can be difficult, however there are a handful in particular worth writing home about developed by well respected, creative games studios that cover an arry of themes.

Remember, an online slot game's return to player percentage doesn't guarantee how much you'll win though it can help you to make a more informed choice based on what your gameplay experience may look like.

What is the highest RTP slot?

While it's hard to say for sure, with new slot site games being released all the time. At the time of writing, in our list, Mega Joker is the best RTP slot game with 99% RTP. There are other high RTP slot games (>97% RTP) found above.

What is the house edge?

The house edge is another way of describing the advantage the house (the land-based or online casino) has. In terms of RTP, if we take Mega Joker for example with a 99% RTP, the house edge with be 1%.

What are the slots with the best odds?

This is just another way of asking what slots have the best odds of winning, or what's the best slots payout. Slots with a higher RTP will give you more frequent payouts, generally speaking. You may have more regular, but smaller wins. Look at our list above for the highest RTP slots.